EXTREME SPEED MOTORSPORTS AIMS FOR THE PODIUM AT ROAD AMERICA 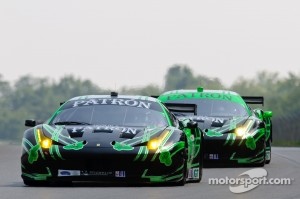 Extreme Speed Motorsports is poised for a midseason turnaround as the American Le Mans Series-Presented by Tequila Patrón heads to Road America for the Time Warner Road Race Showcase. After a week off to analyze what might have been at Mid-Ohio, the ESM crew is anxious to get to one of their favorite venues.

"There's no better time for the Tequila Patrón ESM team to come to Elkhart Lake," commented owner/driver Scott Sharp. "We have worked extremely hard to raise our game over the last few races. It feels like we are very poised to challenge for a top finish. All we as a team need to do is to execute!"

Despite having the pace to finish on the podium, the #01 Tequila Patrón Ferrari driven by Johannes van Overbeek and Sharp were forced to settle for a fifth place finish at Mid-Ohio. While penalties and weather combined to keep the duo from reaching the potential they showed in practice and qualifying, the team has been highly competitive in each of the last two rounds.

The sister #02 Ferrari 458 driven by Ed Brown and Guy Cosmo saw their strategy run afoul of the weather. The team opted to put rain racing ace Guy Cosmo in the car for the first stint in anticipation of rain in the early portions of the race. Unfortunately, the rain held off until Brown's stint, and ultimately caused an electrical failure which took the car out of the running. Brown and Cosmo would ultimately settle for 15th in the GT class.

With Mid-Ohio in the rearview mirror, ESM expects a reversal of fortunes at another of North America's iconic racetracks. Road America, located in the hamlet of Elkhart Lake, Wisconsin, is a daunting circuit that features massive speeds and high g-loads on driver and car. The four mile, 11 turn layout necessitates both raw straight line speed and good handling given its massive straightaways and challenging corners.

"My heartbeat picks up the minute I think about Road America," said Scott Sharp. "I fell in love with the place from the moment I took my first laps around the track."

"Road America is one of my favorite tracks," agreed Brown. "It's a big, long track with many different types of turns. My teammate Guy Cosmo placed 5th last year so we're hoping to build on that for a strong finish."

Johannes van Overbeek thinks that the new four hour race distance will only benefit ESM. "The four hour format will play into ESM's team strengths. We're continuing our development of the new 458 and making it better race by race. Scott is always fast at Road America, and between the two of us we should be a real threat for a podium finish Saturday afternoon. As usual, I can't wait to get started!"

Guy Cosmo shares his teammates' love for Road America. "I'm really looking forward to this weekend," said Cosmo. "Road America is one of the greatest race tracks on the planet, and is the epitome of American road racing circuits. It's long, fast, and extremely rewarding when you get everything right. And when you don't, it's another 4 miles before you have another crack at a good lap. Ed and I finished a remarkable 5th place here last year, and this year we're shooting for a podium."

For Cosmo, however, the weekend is about more than just racing.

"One of the highlights of the weekend will be the Tour de Road America on Friday evening. I'll be participating in the event for the first time, and can't wait. Having an opportunity to participate in this wonderful fundraising event for the LIVESTRONG Lance Armstrong Foundation, Austin Hatcher Foundation and the Vince Lombardi Cancer Clinic really means a lot to me. I have not been directly affected by cancer, but know many people who have. Not only am I participating in the event to show my support, I also chose to contribute to the fundraising and reach out to all of my faithful friends, family and followers to make a small donation on behalf of my participation in the event. In only three days we met my initial goal and raised over $2000. We've got until Friday this week to double that, and I certainly hope to do so. I even purchased a bicycle and began riding and training for the Tour de Road America last week, and I promise to pedal my heart out and show the world I want to help fight cancer however I can."

Official track activity begins Friday with two practice sessions as well as qualifying. All classes of ALMS cars hit the track for hour-long practices at 9:20 AM and 2:00 PM local time, with GT qualifying scheduled for 3:25-3:40 PM Friday afternoon. The team will then have a 20 minute warm up at 10:15 AM Saturday, followed by the four hour Time Warner Road Race Showcase at 3:00 PM.

Senna: “Our drive-through was not deserved. They took our race”

ESM “working on a number of scenarios” to replace Patron