Miller and Maassen Return To Site of Past Glory This Weekend at Road America
No. 48 Paul Miller Racing Porsche Co-Drivers Looking for Fourth Straight Top-10 Result 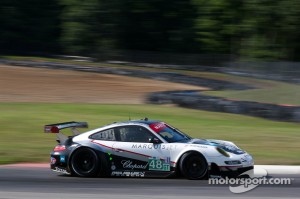 Road America in Elkhart Lake, Wis., is nearly universally regarded as a favorite racetrack for drivers in virtually every form of motorsports. That's certainly the case for Paul Miller Racing co-drivers Bryce Miller and Sascha Maassen, who will share the No. 48 Chopard/Marquis Jet/TOTAL/IPC Porsche 911 GT3 RSR in Saturday's Time Warner Cable Road Race Showcase at the 4.048-mile, 14-turn circuit.

Among the many interesting features of Road America is its Victory Circle, located in a wooded area to the left of the long front straightaway just past the start-finish line. It's a place both Miller and Maassen have visited in the past, and a place both hope to visit once again early Saturday evening when the four-hour American Le Mans Series presented by Tequila Patrón event draws to a close.

Miller scored his first career ALMS victory at Road America in 2008 and returns for his fourth series start this weekend. He and Maassen arrive in Wisconsin riding a three-race streak of top-10 finishes in ALMS competition, and Miller believes the best is yet to come for the team and their Yokohama-shod Porsche.

"Road America is one of my favorite tracks," Miller says. "This race was my first win in the ALMS GT category. It is very high speed, narrow and has lots of elevation change so there's plenty going on to keep you busy. Our program keeps making forward strides every race and now everyone is anxious to make yet again another step forward at Road America."

The Road America circuit features two long straightaways and several high-speed sectors. The track also features a number of great passing spots, which will undoubtedly be utilized throughout the four hours by both Miller and Maassen.

"For Road America a good top speed is essential," says Maassen, who claimed an LMP2 class victory in 2006 and will make his seventh ALMS start at the venue this weekend. "I am confident that we made a significant step with our latest updates to be competitive in this area. Also the progress that we make as a team in learning the car and developing our tire with Yokohama will help us in Road America."

Prior to the race weekend at Road America, however, Bryce Miller will be a featured interview on the Pit Pass USA with Larry Henry Internet radio show, premiering at 7:00 p.m. ET this evening. The show can be heard at www.pitpassusa.com, and will be available on-demand from the same website shortly after its initial airing.

Saturday's race day schedule begins with a 20-minute warm-up session from 10:15 to 10:35 a.m. CT. From 11:30 a.m. to 12:30 p.m., Miller and Maassen will participate in the ALMS all-driver autograph session behind their team transporter in the main competitor paddock. The green flag drops on the Time Warner Cable Road Race Showcase - Round 6 of the nine-race 2011 ALMS championship - at 3:00 p.m.

Porsche in ALMS: One last look before the new era begins - video