Despite months of preparation by the Rock Hill, SC-based team, including a new headquarters and engineering staff, it was only within the last 10 days that the winning #06 car driver lineup was settled. Popow, who hails from Lecheria, Venezuela, signed to be the lead driver of the #06 for the entire 2012 American Le Mans Series (ALMS) season. For this event, he brought along fellow Venezuelan and current IZOD IndyCar Series star E.J. Viso and sportscar regular Burt Frisselle.

Popow and Viso had never driven an LMPC car before Monday of this week, and Frisselle had only raced one once, winning the 2010 Petit Le Mans. 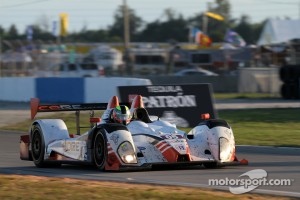 The 12-hour race started out with Popow behind the wheel of the #06, dropping as low as eighth spot in more than 60 cars worth of traffic, but within an hour he was back up to second. Frisselle also battled traffic when he started driving at the 1:15 mark and was able to turn the car over to Viso after three hours. That was when the Venezuelan truly went to work. Over the following three hours, Viso literally carved his way through the field, emerging in first spot and pulling away at each lap – all while triple-stinting the class-spec Michelin tires.

Just after the halfway point, Viso turned the #06 back over to Popow, who was able to maintain the lead, as did Frisselle. It was pit stop timing that caused the CORE autosport machine to drop one spot, but after cycling through with driver changes, Viso got back into the car, reclaimed first spot and never let it go.

For Frisselle this was an especially emotional win. 35 years prior (1977), Burt’s father Brad won the 12-hour classic and was present for this year’s event as part of the 60th anniversary celebration.

Thanks to theis win and third place finish, CORE autosport has gained valuable points for the 2012 season. In 2011, the team won dual championships in the LMPC class – for the drivers and team.

Jon Bennett “I’m so happy about our third place finish, but what I’m most happy about is that all the hard work that the guys did back at the shop gets to be paid off with these results. What a great event it was.

“Last year when we decided to come here we knew a lot about ALMS racing, but we didn’t know everything. We finished second and third in that race and then followed up with a couple of championships. Now we know so much more, we are confident, have refined how we do things as an organization and are ready to continue our success.

“Today, with a win and a podium finish is quite a testament to everyone involved with CORE autosport."

Colin Braun “I’m really happy for the team. To win the race and finish third is a pretty great feat for this team. They did a great job and it was a really great day for points for Jon and I. That’s really important to capture maximum points going into the next event at Long Beach. We’ve got a lot to build upon and a lot to hang our hats on.

“The thanks I have for all the hard work the team has done cannot be overstated. What a great job by everyone.”

“It was something going head-to-head with CORE autosport last year (Lux drove for another LMPC team and won a co-driver championship), but now I have even more respect for this organization if that’s possible.”

Alex Popow "It’s amazing. It’s unbelievable thinking that it was only 10 days ago I did a deal to drive with CORE autosport.

“It was the best possible way to start the season and I knew that CORE autosport was the best team to go to. You know, when you do things last-minute, sometimes things just come together.

“I’ve got to hand it to E.J. It was that last hour where he fought to keep the car up front. And to think that he and I got first place at Sebring after less than a week in the car. Amazing.”

E.J. Viso “I believe that this is the right way of starting the new year. This program for this race was kind of last minute, but everything happened in a great way. I’m very grateful that I had a friend and countryman driving with me in the car. And having Burt in the car was great.

“I think the way the team worked this weekend was the key for the win. This is hopefully the first of many races I’ll do with the team. We all did a fantastic job. All the pit stops were great, all the refueling, all of the driver changes.

“I had never driven the car until Monday. I really liked it – it’s a very nice car, very well prepared by a good team, and I just went for it. It was another challenge. Everything happened in the right way to fight for the win and that’s what we did.”

Burt Frisselle "To come here on the 60th anniversary of the race, with my dad here for the pre-race parade and celebrations, and then to get the win, that was pretty special.

“I knew it was going to be special with having him down here to support me for my first 12-hour, and the fact that it ends like a victory, it’s kind of like I lived a dream.

“CORE autosport is a heck of an organization started by a brilliant guy in Jon Bennett and with the lineup of the #06 car that Alex put together. E.J. was the key – without him we would be sitting here. Between how he drove and how he worked with the #06 engineer Ed (Nathman), it made the difference in getting the thrill of victory.”