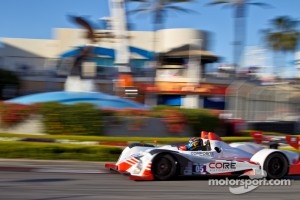 Alex Popow, lead driver of the #06 Soloson Import ORECA FLM09, will have a new co-driver for the event, 24 Hours of Le Mans LMP2 and GT class winner and sports car champion Tom Kimber-Smith. The line-up in the sister #05 Composite Resources machine - team founder Jon Bennett and Colin Braun – look to win for the first time in 2012 after consecutive third-place finishes in the first two events.

Since first meeting the team at the April Long Beach event, Kimber-Smith has spent a lot of time with the team, working with them in a variety of levels, which included a visit to CORE autosport’s 30,000 sq. ft. headquarters to get fitted for the #06 car and driving on the team’s simulator. Kimber-Smith also spent time at a rainy test at the Snetterton Circuit in England, piloting the European Le Mans Series (ELMS) Nissan-powered Zytek Z11SN P2-class prototype that he regularly drives in Europe.

Joining Kimber-Smith at Snetterton, albeit with a different team, was Bennett, who went for a test in a P2-class prototype machine. It was Bennett’s first test in a P2 car, as well as his first time at the English track. Despite the rain, Bennett was able to turn some quick laps and gain valuable experience in a different racing environment.

Popow has also kept very busy behind the wheel since the Long Beach win, including driving in a veritable deluge to a hard-fought fourth spot in the Daytona Prototype (DP) class at the GRAND-AM event at Homestead-Miami Speedway in April.

Sunshine smiled on Braun in April, who scored two podium finishes in two races in his World Challenge Kia – at Long Beach and at Miller Motorsports Park in Tooele, Utah.

The drivers have remained race ready and the team has reassembled the PC machines for the day-into-night six-hour event. In 2011, the dual-championship organization scored a second place finish, fighting hard to lead the PC class and since then, the team has refined and rebuilt with new processes and procedures.

First practice for CORE autosport at Mazda Raceway Laguna Seca is on Thursday, May 10. Additional practice and qualifying will take place on Friday, May 11, with live qualifying coverage on ESPN3 and ALMS.com starting at 7:40 p.m. ET / 4:40 p.m. PT. Saturday’s six-hour American Le Mans Series Monterey Presented by Patrón will be broadcast live on ESPN3 starting at 4:15 p.m. ET / 1:15 p.m. PT. Live timing and scoring for all sessions and the race are available at www.alms.com.

"It has been an exciting season for us so far and the entire organization is ready to keep going against a very tough PC field. Between the driver lineup for both cars and the structure that team manager Morgan Brady has put into place, I think that CORE autosport should do well at Mazda Raceway.

“Colin and I have been working hard on optimizing the #05 car and really learning each other’s styles. He’s a very talented driver and I’m learning a lot from co-driving with him this season. We have had some good results in the #05 car – on the podium for Sebring and Long Beach – but both of us are ready to stand on that top step!

“I always enjoy driving at Mazda Raceway. It’s such a great track, always challenging, and rewards a precise driving style. Six hours is a long time to race, but there’s no question that Colin and I are up for the task.”

“I am ready to win a race in 2012. And I’m ready to do it at Mazda Raceway in the #05 car with Jon. I know he’s celebrated a birthday recently so there’d be nothing better than to give him the gift of a win.

“Mazda Raceway is one of my favorite racetracks. It’s got a lot of unique high-speed corners, and I love the layout of the track and the flow.

“I’ve been able to spend a lot of time with the team and the car since Long Beach, and we have been able to experiment and learn more about what this PC car can and cannot do. Developing this #05 car with Jon, coordinating our driving styles and thoughts is what’s important to win races.

“Six hour races can be some of the hardest endurance races out there. You can’t go into it with the same mindset as a 12 or 24 hour race, but as a really long sprint race. They are a lot of fun, but it’s tough because you want to have a long-race mindset but don’t have enough time to recover from mistakes, but a very long time to make them.”

“I’ve driven at Mazda Raceway before and I really like the track. And even though I’ve not driven a PC car there I know that with its great handling and braking it will be a lot of fun.

“Tom is going to be a good co-driver for this six-hour event. He has a lot of experience endurance racing, including at Le Mans, and from the time I’ve spent with him he is very fast and methodical with the way he works with the team. I think I’m going to learn a lot from him as my co-driver – it’s very important for me to learn as much as I can from him so I can improve and keep the #06 car up front.

“So far with only two races in my first year of ALMS we have won both of them. No question that CORE autosport is a great team, and it will be up to me and my co-driver to continue the championship lead this weekend.”

“I was able to visit the CORE autosport shop last week and I’ve got to say it’s a really impressive facility. It could put quite a few European teams to shame, including F1 teams. It’s not what I was expecting at all and definitely got the ‘wow’ factor.

“I’m really looking forward to getting out on Mazda Raceway. It’s a big deal for me to be able to drive the track for the first time. I’ve done a lot of work with Nissan for the past two years and they are very involved in Grand Turismo 5, which is based around Mazda Raceway. Besides on the Playstation, I’ve seen a lot of ALMS on UK television, and it’s one of the tracks that you see that you say to yourself ‘I’d like to go there one day,’ and that day will be this week!

“There’s a lot of pressure stepping into a car with Alex, who’s won both races this year. But I don’t think I could be in a better seat with a better team and I thank Alex and CORE for allowing me to do so.”