Darren Law scored a podium finish at the inaugural Petit Le Mans race, in 1998. He hopes to do the same at the final American Le Mans Series (ALMS) Petit Le Mans on Oct. 19. The Phoenix driver will join Dempsey Racing for the 1000-mile / 10-hour race that has become one of the classic endurance events in North America. Law will team with Charles Esplenaub (Lutz, Fla.) and Charles Putman (Mills, Wyo.). driving the No. 10 Porsche 911 GT3 Cup car in the GTC class. 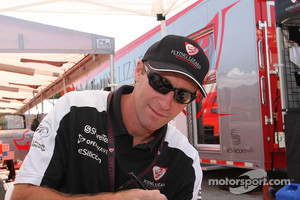 Law recalled the excitement of his second-place GT3 finish in 1998 with BMW Team PTG: "It was the first time for an event that length and it was the first-ever association with the Le Mans name in North America.

It was a historic event and it was great to be part of it.

It has now become one of the events like [the 12 Hours of] Sebring or [the Rolex 24 At] Daytona, one of the big endurance races everybody wants to do."

The Petit Le Mans will be the final race in the American Le Mans Series, which will merge with the Grand-Am Rolex Sports Car Series in 2014, creating the United SportsCar Championship. Law has competed in both the ALMS and Rolex Series since they started in 1999 and 2000, respectively, so it's fitting he will be on the grid for the last race of the era.

"I've been involved in both series for more than a decade, full time in both series since 2004," he said. "ALMS has been a wonderful series and I'm happy to have been part of it since its beginnings. It's sad to see it go, but on the other hand, it's exciting to see all sports-car racing come together as one program.

"I love the long endurance races and I really like Road Atlanta. It's a challenging race track with a lot of history. To be fast at Road Atlanta, you have to be precise and have a car that's comfortable in the high-speed corners. It always has a great fan turnout and then you add in the final event of this series for ever, I'm sure it's going to be a huge event. I'm glad to have the opportunity to be part of it."

Although it's his first race with Dempsey Racing, Law will find many familiar elements at the Petit Le Mans. He has driven Porsche race cars since the late 1990s and knows the Porsche GT3 Cup car well. About the time he started racing Porsches, he first worked with Esplenaub at the Bob Bondurant School of High Performance Driving, where they were both instructors. (Law is now chief operating officer at the school.) And Law's personal sponsor, OMP, is also a team sponsor.

"It's great to come on board with this program. Dempsey Racing has really built a competitive program over the last few seasons. It will be fun driving with Charles Espenlaub, as I have known him for a long time and we have worked together, as well. He and Charles Putman have also been driving together for quite awhile and have had great results over the years," Law said.

"For the structure of this class, I feel we have as good a chance as anyone and should make for a strong team. I am looking forward to joining them for this final event. I am also glad to hear OMP is on board, as they have been very supportive of me for many years."