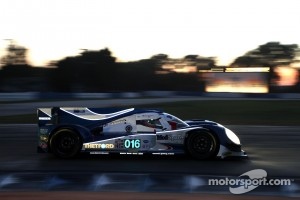 SEBRING, FL March 17, 2012 - It was a two-peat for Dyson Racing. As they did last year here at the season-opening 12 Hours of Sebring, they leave today with first place American Le Mans Series points in the combined ALMS/FIA World Endurance Championship race. Chris Dyson, Guy Smith and Irishman Steven Kane brought their new Lola B12/66-Mazda home in first place in P1. "Winning the championship is the goal and to score maximum points here is a great way to start the season," said Dyson.

The team received their new car twelve days ago. It ran flawlessly with the only mechanical maintenance occurring at the six-hour mark when the team changed the throttle mapping. The team worked more than 142 hours in the nine days they have been here in mid-Florida. Smith commented that "this is a testament to the team. This is how they work: they dig deep and this win is their reward. Sebring pays valuable extra points and the team deserves every one." Added Dyson, "All of our partners have been phenomenal. Mazda has been steadfast. We really appreciate the support from all our sponsors and especially ModSpace and G-OIL. Lola has been a great long-term partner. Dunlop brings something new to the table every weekend and Advanced Engine Research continues to push the envelope on the engine.

"Greg Pickett and his Muscle Milk Team came here with a well-sorted package and they were fast all day. They put in a great effort against the Audis today and our hats off to them. They keep us honest every weekend and they have raised their game and we expect them to be stiff opposition all year. We have come to the table ourselves with a new car and we have a lot of headroom with the package and we are optimistic about the races ahead."

Since 1979, the Sebring race has fallen five times on St. Patrick's Day. "I was reading before the race, seeing who was the last Irishman to win it on St. Patrick's Day, and it was Derek Daley," noted Kane. "So it is a great honor for me to say that I was able to say that I won an ALMS race on St. Patrick's Day. That is something as a driver I have always wanted to do. I kept on saying to these guys that something good is going to happen this weekend, and it all worked out, so hopefully that bit of Irish luck that came this weekend will stay for the rest of the year!"