To close out ALMS, Ende is searching for the second Petit Le Mans victory of his career

Ende's ALMS career has spanned the GTC and Prototype Challenge classes over the past four seasons, with six victories - including one at Petit Le Mans. In his limited campaign with RSR Racing this season, Ende has established himself as a driver to beat as he has led at five of six races, scoring two wins with co-driver Bruno Junqueira. The duo will be joined this weekend for the first time by Gustavo Menezes. 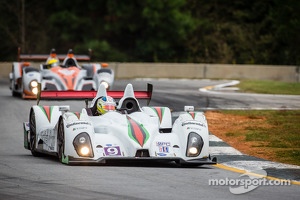 "It's bittersweet to see the ALMS coming to an end," said Ende. "But right now, we are focused on closing this season out with a win for RSR Racing at Petit Le Mans. I'm feeling pretty confident about things as they currently stand - both Bruno and I have had really good pace and the guys have been getting the job done in the pits. The guys called an absolutely perfect strategy in Lime Rock and Road America which sealed the victory each time, and if not for some bad luck at Laguna Seca and Mosport, we may have had even more wins. So we are excited for this weekend."

Having been a previous class winner at Petit Le Mans, Ende is keen to score a victory in what will be the final ALMS race. His previous Petit Le Mans victory came in a GT-C class Porsche which he shared with Andy Lally and Henri Richard.

"The ALMS has been a huge part of my career, and it is a bit sad to know this is the last part of this chapter of sports car racing history," said Ende. "And we are excited for the future, even if it may only include ten Prototype Challenge cars. But with this being the final race, it does make it a little bit more special. Petit Le Mans will obviously continue on and will be a big part of sports car racing in the future, but as a driver the chance to win the final ALMS race provides a little bit of extra motivation."

Ende also expressed his thoughts for fellow ALMS driver Sean Edwards, who was involved in a fatal incident while driver coaching at Queensland Raceway in Australia on Tuesday. "I was completely shocked to hear about Sean," said Ende. "It's been a tough year for the racing community. My heart goes out to his family and friends, and he'll be in our thoughts all week at Petit Le Mans."

More from
RSR Racing
IMSA Others