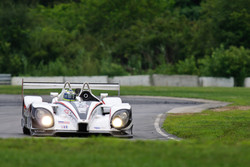 "What a day!" Graf exclaimed. "Unbelievable. It's kind of sinking in right now. It was a late birthday present, plus two other crew members had birthdays this week as well, so it's a nice way to celebrate for Muscle Milk Team CytoSport."

The pole-winning duo of Brabham and Simon Pagenaud took the lead into the first corner, and maintained it throughout the first half of the race. CytoSport took advantage of a full-course caution at the 45-minute mark, though, moving forward a planned pit stop and substituting Graf for Pickett, who had started the race for the team.

Graf, who rejoined the race 15 seconds behind the race-leading Highcroft Racing HPD, driven by Pagenaud at the time, set upon himself to attack the leaders, and some 25 laps later the gap was less than a second, the HPD and the Porsche lapping the circuit nose-to-tail.

Unable to make a safe pass on the tight and twisty Lime Rock track, Graf took advantage of a scheduled Highcroft pit stop on lap 93 to move into the lead.

"I was pushing hard every lap," Graf recalled. "I was a little surprised when I came out in first after our final pit stop but I kept pushing and pushing. It was difficult in traffic. I was aggressive and I had a lot of close moments."

With less than 45 minutes remaining in the two-hour, 45-minute race, Brabham took over from Pagenaud at the wheel of the Highcroft HPD, with a 25-second deficit to the leaders. Within half an hour, it was now the HPD on the Porsche's tail, the reverse of the setup earlier in the race.

It all came to a head on lap 157, with some 12 minutes remaining on the clock: Brabham outbraked Graf into the final turn, and came up on the inside. However, the narrow track has little space, and there was not enough room for the two prototypes. As Graf edged to the right, Brabham took two wheels off the track to avoid impact, accelerating a slow puncture that the team had picked up earlier.

"I knew I had developed a puncture when I was chasing down Klaus," Brabham explained. "Whatever was in the tyre was dislodged when I was pushed on to the grass and the tyre went down the following lap." 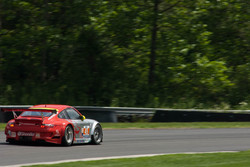 Brabham had to pit on the next lap to replace the punctured tire, while Graf sped away into the distance. The race stewards subsequently assigned a stop-and-go penalty to Graf for blocking, but even that didn't bring the Porsche far enough back to be within striking distance for Brabham; at the checkered flag the gap was 27.810 seconds in Graf's favour.

The Porsche and HPD were the only two LM prototypes to finish the race; both the Dyson Porsche and the Drayson Lola suffered from problems early on in the race, and Drayson finished 58 laps adrift while Dyson had to abandon the race after just seven laps.

In the LMGT class, Porsche extended its winning streak to six years, not having lost since 2004 at the short Connecticut road course, as Joerg Bergmeister and Patrick Long battled their rivals for the victory in the hard-fought class, and finishing fifth position overall.

Long, driving the No. 44 Flying Lizards Motorsport Porsche 911 GT3 RSR, held the position from the start. The expected fight for class victory between Jaime Melo and Gianmaria Bruni in the Risi Ferrari F430 and Long/Bergmeister in the Flying Lizards Porsche never quite materialized, though.

Melo, at the wheel of the Ferrari just over 20 minutes into the race, was about to lap the #3 Corvette Racing C6.R, when the two competitors encountered slower traffic, leaving little space for the two LMGT front-runners.

"Melo had a legitimate run on me going down the hill, I got caught up by guys running 10 seconds off the pace, and he came up the inside," Corvette Racing's Johnny O'Connell said. "In my view, he moved to the left, made contact, and that's what caused him to go off. I know that he's very disappointed, but it is what it is." 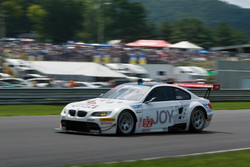 Even with the lead Ferrari gone, the field was not exactly wide open for Long and Bergmeister: both the works BMWs, the #4 Corvette and the remaining Risi Ferrari were potentially trouble. Still, the duo were able to keep them behind.

"Joerg had a flawless stint and turned over a clean, solid car to me to finish," Long recounted. "By the time I took the wheel for my second stint, our strategy had gotten us the provisional lead. My job was to maintain the gap. Navigating the traffic was unbelievably difficult. I had to shift from trying to hold the gap to just keeping the BMWs behind me. Traffic became my friend -- each time I worked through a pack of cars I was able to increase the gap."

It was a spectacular fight to the finish, though, as the BMWs harassed Long until the checkered flag came out. At the flag, the margin was mere 1.5 seconds from the winning Porsche to the leading BMW of Tommy Milner and Bill Auberlen. Dirk Muller and Joey Hand took third in the class.

After a late pit stop, the No. 61 Ferrari also fell back down the field, and eventually Mika Salo and Pierre Kaffer finished in fourth place behind the BMWs, and one laps down on the wining Porsche.

"The car was handling really well today," Bergmeister said. "When I was driving alone or when there was a gap to the BMWs in front of me things were easy to maintain. But when I got close to them, temps went up and we picked up some understeer. But I knew that we were ahead of the others on our fuel strategy and I didn't want to take any risks to make sure I turned the car over to Patrick in one piece."

The series now moves west for its next race, at the Mid-Ohio Sports Car Course in two weeks' time.