Alton, VA - Muscle Milk Pickett Racing continued to add to their team history today by winning an eighth consecutive race this season at Virginia International Raceway, but unlike some other of their race wins, it wasn't a walk in the park.

Right off the start, Klaus Graf took the lead from Johnny Mowlem with a nice pass at the exit of Turn 1. From that point on, Graf started building a gap but unfortunately for the German, the #48 car driven by Bryce Miller pushed him into an off-course excursion, which resulted in Graf losing the lead. 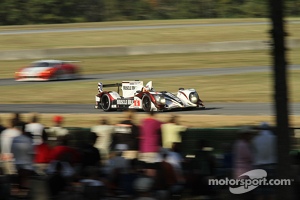 The German reclaimed his position on lap 30 when Mowlem entered the pits. The team then conserved their spot at the front of the field following their pit stop for fuel, Michelin tires and a driver change to Lucas Luhr, thanks to an excellent pit stop by the Muscle Milk crew.

However, about 10 minutes later, Guy Smith, who was now aboard the Dyson car, got by Luhr thanks to the straight line speed of his P1 car.

That wouldn't be the last lead change, as the Muscle Milk engineering team made a great strategy call with about one hour and 10 minutes to go in the two hour and 45 minute event by calling Luhr into the pits for fuel and tires during a caution period.

The move paid off as Luhr returned to the front of the field when Smith pitted under another full course caution.

With Smith now at the back and having to make his way through the field, Luhr immediately started building a gap when the action resumed with 39 minutes to go.

The German maintained the lead until the end, crossing the line 22.8 seconds ahead of Smith, giving Pickett Racing their 21st ALMS win, his 49th career ALMS win and Graf his 22nd.

With their eighth win this year, Luhr and Graf have now set the ALMS consecutive overall win record for drivers to eight. They also tied the driver record for the most consecutive wins 'all classes' for a driver pairing and have broken the record for most overall race wins in a season for drivers, a record previously held by Allan McNish and Dindo Capello.

The German pair has also established a new record for the longest consecutive P1 class wins, which was previously held by Luhr and Marco Werner.

Pickett Racing has also tied a record held by Audi and Penske Racing for the most overall race wins in a single season.

Next up for the Muscle Milk squad will be the final round of the season at Road Atlanta. The Petit Le Mans will take place from October 16 - 19, 2013.

Klaus Graf - driver #6 Muscle Milk HPD ARX-03c: "It was a great battle with Dyson Racing today. We came a little bit short yesterday in qualifying for pole but today I had a good start and I was able to get by Mowlem coming out of Turn 1 and then build up a nice gap and maintain the lead. But then the yellow came and bunched the field back together.

I got a good restart, led again by a couple of seconds and then got punted by a GT car which, I guess, he didn't see me as traffic is difficult here for everybody. We lost the lead at that point but I fought back and was very close with Johnny (Mowlem) until he pitted. So, I was back in the lead when I handed the car to Lucas.

"I have to say, today, Lucas and I drove very well but the strategy call is what gave us a win. It was a very good call by Brandon Fry and the Muscle Milk boys. We're doing really good pit stops, mistake free, and everyone knows what their doing. This team has really come together."

Lucas Luhr - driver #6 Muscle Milk HPD ARX-03c: "It's nice to have 49 wins. Now, of course, the aim is to get 50 at Petit but to the race itself, I think today we had very strong competition from Dyson Racing with Guy Smith and Johnny Mowlem. We know from the past that they have been very quick here.

"Klaus did a great move at the exit of (Turn) 1 to get us into the lead but in my first stint I lost the lead against Guy (Smith). When Brandon (Fry) called me in during the safety car period, the call came very, very late and I was nearly by the pit entrance already. I knew at this point that it could work out for us. All I had to do was push as hard as I could on the last restart and open up a gap. I controlled it from there.

"As Klaus said, the victory mainly came thanks to the strategy call and the great pit stops by the Muscle Milk Pickett Racing crew."

Virginia is for Michelin