Honda Performance Development continued its streak of victories in the 2013 American Le Mans Series Saturday at the Circuit of the Americas in Austin, Texas, clinching its second consecutive LMP1 engine manufacturers’ championship as Muscle Milk Pickett Racing’s Klaus Graf and Lucas Luhr led all 83 laps in their HPD ARX-03c Honda to post their record-extending seventh consecutive victory of the season. 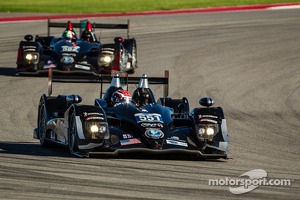 HPD is also on course to repeat as LMP1 chassis manufacturer champion with a successful race finish in the next event, at Virginia International Raceway.

In the LMP2 category, the duo of IndyCar veteran Ryan Briscoe and team owner/driver Scott Tucker finished third overall and first in class, heading a 1-2 LMP2 class finish for Level 5 Motorsports in its pair of HPD ARX-03b Hondas. Teammates Guy Cosmo and Marino Franchitti were just over five seconds behind at the checkers.

Starting from the pole, Luhr briefly surrendered the lead to the Dyson Racing Lola-Mazda of Tony Burgess, but re-passed his rival later in the lap. The Muscle Milk HPD-Honda continued to lead every lap of the two-hour, forty-five minute contest, even through the two scheduled pit stops, and finished two laps ahead of its closest competitor in a caution-free contest.

For Luhr, the win extended his own record of American Le Mans Series victories to 48, with two races remaining in the 2013 season, while Graf scored his 21st series win.

In LMP2, the two Level 5 HPD-Hondas traded the lead several times, with Cosmo in the class pole-starting #552 leading through the first round of pit stops. Teammate Briscoe took over at the front in the #551 ARX-03b Honda, until Franchitti regained the advantage for the #552 following the second and final pit stop.

Franchitti went on to set the fastest LMP2 race lap, but was called to the pits for a suspected tire puncture in the final half hour, once again reversing the running order. Briscoe took the checkers for his first LMP2 win since the season-opening 12 Hours of Sebring, while co-driver Tucker won for the fifth time this year.

Behind the Level 5 entries, championship rivals Extreme Speed Motorsports started at the rear of the 33-car field, when drivers Scott Sharp and Ed Brown failed to meet the minimum practice time requirements due to heavy rain at the circuit on Friday. The #02 HPD-Honda of Brown and Johannes van Overbeek had a relatively trouble-free run to finish third in LMP2, and fifth overall, one lap behind the Level 5 entries.

Sharp and Anthony Lazzaro lost time mid-race in their #01 ARX-03b when Lazzaro was punted into a spin by a GT-class entry, but the pair recovered to finish fourth in LMP2, just over 12 seconds behind their teammates.

The 2013 American Le Mans Series presented by Tequila Patron next travels to historic Virginia International Raceway for the October 5 Oak Tree Grand Prix, the penultimate race prior to the merger of the series with Grand-Am to form the Tudor United Sports Car Championship in 2014.

We’ve really put together a great package with our partners at HPD and Michelin. With the latest updates from HPD on the car, I believe if you look at the times you will see we are on a par with the [World Endurance Championship] cars. Lucas now has 48 race wins, so our goal is to get him to 50 by the end of this season.”

Ryan Briscoe (#551 Level 5 Motorsports HPD ARX-03b Honda) 1st in LMP2 and 3rd overall with co-driver Scott Tucker; 6th class victory of the season for the team: "After being taken out at the start in Baltimore, this was kind of a ‘comeback’ race for us. Scott [Tucker] did an awesome job in the first stint and the team performed flawlessly.

This was a brand new car, and our mechanics, engineers, the HPD chassis and Honda engine all worked perfectly. When I first got in the car in testing earlier this week, I couldn’t believe how good it felt, and that feeling continued right through today. It was a picture-perfect weekend, I’m really proud of our team.”

Steve Eriksen (Vice President and COO, Honda Performance Development) on Saturday’s championship-clinching victory for HPD: “Having an all green race was a welcome departure from the challenges of the previous race at Baltimore. The Muscle Milk Pickett Racing team put on a commanding performance and was the class of the field, finishing two laps ahead of everyone in their trouble-free run.

Congratulations to all of the Honda associates at HPD on our repeat win of the LMP1 engine manufacturers’ championship in the final year of the ALMS. The LMP2 battle between Level 5 and Extreme Speed was entertaining for the fans, and we were pleased to again have the reliability and speed of the HPD ARX-03b Hondas demonstrated for the world to see.

We’re very pleased to win the inaugural sports car race at this world-class Circuit of the Americas facility. We look forward to helping our teams continue to set records in the remainder of the season.”