Katherine got her ride in Monterey – It’s the DeltaWing!

Spend more than five minutes with Katherine Legge and you’ll soon realize that she’s one of the most popular drivers in the American Le Mans Series. And today was only her first day in front of the fans! Like all drivers in the ALMS, Katherine is accessible to her fans in a way that would be foreign to Formula One and NASCAR stars. She seems to be genuinely delighted to answer questions and to interact with her fans be they race attendees or videographers from local television stations. The familial atmosphere of sports car racing seems to be particularly well suited to this driver from Guildford, Surrey, United Kingdom, and one wonders why it took so long to bring her to this series. Her driving skills, easy rapport with people and down to earth manner all make her a perfect fit for the ALMS and the new 2014 series, United SportsCar Racing. And, how she got here makes for an interesting story in itself. 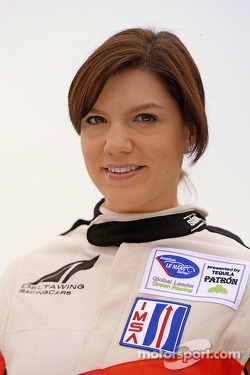 In 2005, Kevin Kalkhoven’s daughter, Kirsty, noticed Katherine when traveling with her father in the UK. While Katherine did not have an extensive racing background, she had started go karting at the age of 10 as do most drivers and done as much racing as she could. Lacking family wealth and connections has made her journey more challenging than most. But, here in the ALMS, it sounds like she is going to be treated just like any other driver. As one driver put it at the Fan Forum on Friday, “the only difference will be that when we are entering a building together, I will step back so that she can enter first, but other than that, when the helmets go on, she will be treated like any other driver”. This is a refreshing change from how Danica Patrick was and is marketed like a commodity in both the IZOD IndyCar Series and now in NASCAR. Katherine Legge is accepted in the ALMS as a competitor, which allows her to be judged solely by her performance as a driver and not by her magazine covers.

Legge’s initial years in the United States included her 2005 participation in the Toyota Atlantic Series, in which she won three races. Each win made for a new record because, prior to the arrival of Legge, no other woman had won any races in open wheel development series in North America. Many people, including this writer, believed that Legge would have done better staying in the Atlantics series rather than being quickly promoted to the Champ Car Series by Kalkhoven for the 2006 and 2007 series. These were not very good years to be an emerging driver because of the relative instability of the CCWS. For 2008 through 2010, Katherine competed in the DTM series as a factory driver for Audi and then sat out the 2011 season. Clearly, it was time for a change.

Knowing that sponsorship was as important as driving skill in earning a full time ride in IndyCar, Legge brought TrueCar, a car buying concern, to Jay Penske’s Dragon Racing as a sponsor in 2012. The concept of having TrueCar sponsoring Katherine and heading up their “Empowerment of Women in Racing” program seemed like a dream come true. Unfortunately, the dream soon turned into a nightmare and at first, it had nothing to do with TrueCar or Dragon Racing.

Dragon Racing was to be the primary team for Lotus’ IndyCar engines. The only problem was, Lotus, foregoing any thought of quality let alone their corporate image, farmed out the IndyCar engines to a vendor and selected the low bidder. The result was a disaster and mostly for Lotus, whose entries soon became the “slow cars” of the series. Those teams unfortunate enough to be signed up with Lotus, including Dragon, left the British marque faster than Newt Gingrich leaves sick wives. The result was that soon, HVM was the only IndyCar team racing a Lotus and I use that term loosely. For Dragon Racing, it meant its two drivers only had one engine and therefore only one racecar between them and it’s fair to say that Legge and her teammate CCWS multiple year champion Sebastien Bourdais were both miserable during the 2012 season. So, last year was a wash and since Katherine had a two year contract with Dragon, there was every reason for both to be optimistic about 2013.

Except. Except. How do I say this? Jay Penske is Roger Penske’s son, but unlike his father, who treats everyone he works with as family, Jay Penske chose not to honor his contract with Katherine Legge for 2013. And during his off season behaved in such a manner that it was obvious that he had absolutely no interest in or commitment to empowering women. It soon became obvious to Katherine Legge that she would have to leave Mr. Jay Penske to her attorneys and find another job. (TrueCar, who has not commented on Jay Penske’s disreputable behavior or Katherine in 2013, has continued it’s “empowerment” program with the other women racers from 2012. This writer remains skeptical about their commitment to women in racing because of their lack of support of Katherine. We shall see if the program is back for 2014!).

Enter our Knight in Shining Armor, Dr. Don Panoz and his very revolutionary car, the DeltaWing. In Katherine’s words, “it’s a cool car”. It consumes, reportedly, far less fuel and fewer tires than other cars. Sounds like there’s a chance there are some commercial applications here?! The job that Katherine and her co-driver Andy Meyrick have this season is to test the DeltaWing (I’ll call it DW in deference to my fibro compromised back!) at various tracks and at actual races. The first race will be the ALMS Monterey at Mazda Raceway Laguna Seca on Mother’s Day eve. And then, who knows? This car excites people wherever it goes, although as Katherine says, “you either love it or hate it”. 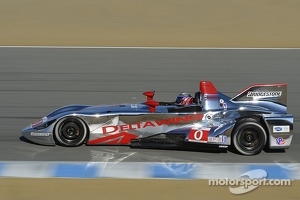 The technical side of racing has never been my strength, but I did learn that the DW is extremely fast in the straight line, and Legge says that it’s the fastest car she’s ever driven going into the apexes. To me, if you take these two factors together, once all the racing variables are somewhat known, this car should be at once the fastest and most efficient car running. Who knew?

One question this writer had was what effect do the shark like wings have on the car? Katherine says it adds stability. But, it’s important to remember that the DeltaWing is a development car with a capital D. Its further success will depend on Dr. Panoz’ commitment to this car and what kind of feedback his two drivers can give the engineers about the car. But, it’s new, it’s exciting and in Katherine Legge’s words, “a breath of fresh air” and “awesome”.

Funny, when we were kids, Jeff and I used to sit inside feeding tables during dinner time. We found out later that we had both dreamed the tables were actually rocket ships and that we were piloting them (of course!) and the rocket ships looked just like the DeltaWing! How cool is that?! So, Katherine got her ride – it’s a DeltaWing! And she’s in town for just a day or two! So be sure to see her as she runs our “rocket ship” around Mazda Raceway Laguna Seca on Saturday!

Dixon on the hot seat