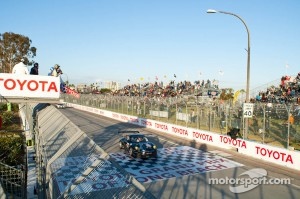 TAVERES, FLA. (May 8, 2012) - Alex Job Racing's (AJR) Cooper MacNeil will be joined by veteran sports car driver Anthony Lazzaro in the No. 22 WeatherTech AJR Porsche GTC at this weekend's American Le Mans Series (ALMS) Monterey presented Patron to be run at Mazda Raceway Laguna Seca to run on Sat., May 12.

Lazzaro (Atlanta, Ga.) joins the team as Leh Keen has another commitment. Lazzaro and MacNeil have had a mentor - student relationship that dates back to the Ferrari Challenge Series. Lazzaro is a seasoned sports car and open-wheel driver who brings nearly 20-years of racing experience to the 22 WeatherTeach Porsche team.

MacNeil (Hinsdale, ILL) comes to Laguna Seca second in the GTC points, just one point out from first place. The young college student has just finished final exams at the University of Colorado at Boulder. He also comes into Monterey with a win streak, having won the Rennsport Reunion Porsche Cup race there last October.

"When I won the Rennsport race in the Porsche late last year, it wasn't easy," MacNeil said. "I had to push the car really hard the entire duration of the race. "I have a feeling the ALMS race will be similar. Laguna is definitely one of my favorite tracks. I have been there twice and won both times, so I have to make it a hat-trick, naturally! Leh will be running the Brumos Porsche with Grand-Am, so I will be driving with Anthony. He was my coach on the Risi Ferrari team last year, and he's the man. I have no doubt we'll be running up front."

"I know Cooper from coaching him in Ferrari Challenge last year," Lazzaro said. "I tested a Porsche last November in Daytona and last raced one in the Rolex 24 Hours in 2008. Eleven of my 15 Daytona 24 Hours have been in a Porsche. I love Laguna Seca. I was able to win the Toyota Atlantic race there in 1998 and 1999, clinching the Atlantic Championship there in 1999. I drove the Ferrari 360GT the first time it was raced in the ALMS in 2002 at Laguna Seca. We finished second behind the Alex Job Porsche. To be successful at Laguna Seca you need good mechanical grip for the slow corners like turns two and three, but you also need aero grip for the very fast turns four, six, nine and ten."

Alex Job, team owner, will be going for two in a row with MacNeil this weekend.

"We were able to win the Rennsport Porsche Cup race last fall with Cooper," Job said. "Although the car is a little different in GTC trim, we have a great baseline to start with as well as some winning momentum from seven months ago. Anthony is a seasoned pro that we are very comfortable with in the car. Cooper and Anthony have a good relationship that will only benefit us this weekend."