Tucker has a star-studded lineup of sportscar and open-wheel drivers for the 12 Hours of Sebring.

Sebring, Fla. - Scott Tucker and Level 5 Motorsports will be aiming to rewrite the history books this weekend, as the defending American Le Mans Series presented by Tequila Patrón P2 champions go for their fourth consecutive victory in the Mobil 1 Twelve Hours of Sebring Fueled by Fresh From Florida.

As the longest and most physically demanding race on the ALMS schedule, preparation is key to success on the 3.7-mile, 17-turn circuit, created from a former World War II airfield in 1952. Now celebrating its 61st anniversary, Sebring is considered to be one of world’s most prestigious endurance races, and oftentimes is even tougher to win than the famed 24 Hours of Le Mans.

For Tucker and his Level 5 organization, success at Sebring hasn’t come easy. The Wisconsin-based team overcame the challenges of new car dramas to take the inaugural PC class victory in its ALMS debut in 2010. The following year saw another trip to victory lane but this time with a new Honda-powered P2 car, also in its class debut. 2012 marked a repeat win in P2 and an impressive fourth place overall finish, the highest of any ALMS entry in the combined World Endurance Championship event. 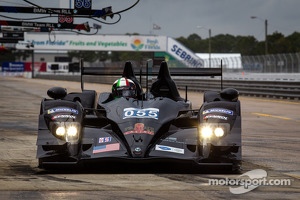 All five drivers are former ALMS winners, including reigning IZOD IndyCar Series champion Hunter-Reay, who teamed with Tucker to take class honors at Sebring in 2011. Franchitti has five victories and more than 20 podium finishes to his credit, including a second place finish in last year’s Petit Le Mans with Level 5.

While newcomers to Level 5, both Briscoe and Pagenaud also need no introduction. The 31 year-old IndyCar ace was previously with Penske Racing’s Porsche RS Spyder program, which saw the Australian native take four ALMS class victories in only 16 career starts. Pagenaud, the 2012 IndyCar Rookie of the Year, is a former ALMS LMP championship winner and one of HPD’s lead development drivers.

“We’re fortunate to have such a strong lineup for Sebring,” Tucker said. “I don’t think you could ask for anyone better. They’re all champions in their own right and have worked very hard to get where they are today. It’s great to have Ryan Hunter-Reay and Marino Franchitti back with us and we welcome Ryan Briscoe and Simon Pagenaud to the team. We know it won’t be easy going for our fourth straight Sebring win but I feel that we have everything in place to give it our best shot.”

Level 5 and its partners have worked tirelessly during the off-season to perfect their P2 package. It’s included an extensive testing program with HPD to develop its new direct injection system for the 2.8-liter twin-turbo V6 engine. Another change for 2013 comes with the return of Michelin as its tire partner, which Level 5 had a successful relationship with for its first two seasons in the ALMS.

Both the new engine developments and Michelin tires were put to the test last Saturday at Sebring, which was followed by further testing scheduled for early this week at the Florida circuit. Driver combinations for Level 5’s Nos. 055 and 95 HPD ARX-03b cars will be determined prior to the start of official practice on Thursday, with qualifying set to determine the grid on Friday afternoon.

“Heading into a 12-hour race, there is always an increased level of preparation,” said Level 5 team manager David Stone. “But for us, it’s business as usual. As you go along from race to race and year to year, your core group learns more and more. The goal is for that experience to pay off, and we feel that it has. Our mission hasn’t changed and that’s to try and have the best cars we can with the best drivers and the best overall package to go for the win.”