Austin, TX (September 20, 2013) - Despite the inclement weather and lack of track activity at the Circuit of the Americas on Friday, there was no clowning around for Muscle Milk Pickett Racing as the team was all business picking up their fifth consecutive pole position of the season. 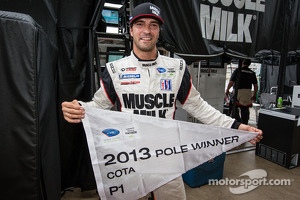 With both practice sessions run in the rain, the team had only completed a total of nine laps ahead of the qualifying session. But it didn't stop Lucas Luhr, who was taking on qualifying duties this weekend, to immediately go to the top of the charts when P1 qualifying got underway.

The German completed seven laps in the 15-minute session and registered his quickest one of two minutes and 7.851 seconds on his fifth orbit of the 3.4-mile, 20-turn track.

The pole position was Luhr's 23rd in the American Le Mans Series, which ties him with Olivier Beretta for most 'fast qualifiers' in the series.

The Muscle Milk Pickett Racing team will be back on track at 8:00 am local time for the morning warm up before leading the field to the green flag at 3:45 pm local time.

The ALMS race at COTA will be streamed live on ESPN3 on Saturday, September 21 from 4:30 pm ET with a tape-delayed broadcast on ESPN2, Sunday, September 22 at 1:00 pm ET

"It was very difficult in qualifying because of the changing weather conditions with the rain. The rain was heavy at times and then a little lighter. Once the track starts drying up a little bit it gets a little greasier and you start sliding around. You also have to be careful not to overheat the rain tires if it gets too dry, so it wasn't as easy as it might have looked.

"We choose not to go out too much in the practice sessions because of the conditions. We did a stint at the end of the second practice to prepare the Muscle Milk HPD car for qualifying and it worked out well for us as we went on to get pole position. So, overall it was another good day for Muscle Milk Pickett Racing."