Lucas Luhr: "...we were still able to easily double-stint our Michelin tires for two full hours of green flag racing..."

AUSTIN, Texas – The new Circuit of The Americas in Austin provided a big, fast stage and Michelin and its technical partner teams took full advantage to take the bows from the top of the podium as the American Le Mans Series made its debut in the opening act of an international Sports Car doubleheader. 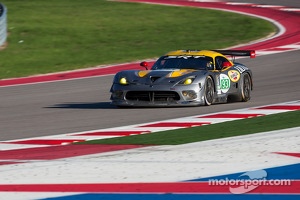 With the Muscle Milk Honda squad in control of the two-hour 45 minute race, all eyes focused on the GT class where an exciting chase scene played out. BMW Team RLL’s Dirk Mueller stalked the race leading Corvette of Antonio Garcia for the final hour. Mueller repeatedly closed to within inches of Garcia, only to lose contact in traffic and see a gap re-established.

Meanwhile, SRT Viper’s Jonathan Bomarito relentlessly narrowed a 17 second gap to make it a three car GT chase with five-minutes remaining. The Viper caught and passed the BMW and set out after the Corvette on the final two laps, but Garcia, co-driving with Jan Magnussen, held on for his third victory of the season. Corvette Racing, BMW Team RLL and SRT Motorsports are all Michelin technical partner teams.

The Viper’s relentless pace helped illustrate the Michelin performance on the high speed, high load circuit, with 120 degree track surfaces in a caution free race. Bomarito pitted on lap 47 and set the fastest GT lap of the race at 2:05.053 on lap 57.

Ken Payne - Technical director, Motorsports, Michelin North America: “Racing at new circuits, especially a major venue like Circuit of The Americas, provides us with a great opportunity to learn, to demonstrate our technologies and to gain insights that will help us to develop new solutions. We are happy with what we have learned, with the performance of our tires and the success of our technical partners and, perhaps most of all with what we can take home to our technical centers.”

Overall and P1 winners Lucas Luhr and Klaus Graf of Muscle Milk Pickett Racing Honda/Michelin: “We didn’t have much practice time due to the rain yesterday, but we were still able to easily double-stint our Michelin tires for two full hours of green flag racing,” said Luhr. “This circuit is pretty tough on tire wear, but the Michelin tires that Lucas double-stinted still looked fresh and were consistent after two full hours.” said Graf.