Oak Tree Grand Prix to play role in the championships

American Le Mans Series teams and drivers are prepared for the penultimate of the 2013 season at Virginia International Raceway.

This will be the second visit for the ALMS to the historic 17-turn, 3.27-mile road course near Danville, Va., when the green flag flies on Saturday Oct. 5 at 2:15 p.m. ET. With only the Petit Le Mans presented by Mazda at Road Atlanta on Oct. 19 remaining., the race is expected to play a major role in determining the final class of champions for the ALMS.

Corvette Racing can claim the coveted GT manufacturer title by winning the race, in addition to claiming the team championship if either car finishes at least sixth. 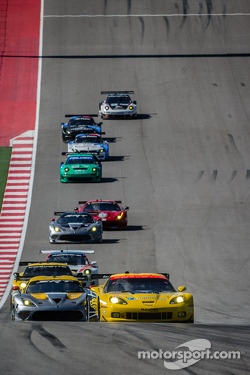 In the battle for the GT drivers’ crown, Compuware Corvette Racing co-drivers Jan Magnussen and Antonio Garcia can eliminate BMW driver Dirk Muller if they win and the latter finishes outside of the top four. In addition, Corvette Racing drivers Oliver Gavin and Tommy Milner would need to take second to stay in contention if their teammates win.

Level 5 Motorsports will be looking to clinch the P2 team championship with a victory, while team driver Marino Franchitti can eliminate everyone except new co-driver Guy Cosmo if they finish the race, and Scott Tucker and Scott Sharp fail to complete the minimum 70-percent distance needed to score points.

While drivers Klaus Graf and Lucas Luhr have already clinched the P1 drivers’ championship along with the engine manufacturer’s title for Honda, HPD can add the P1 chassis manufacturer title and Muscle Milk Pickett Racing the P1 team championship by winning the race.

A victory could also clinch the Prototype Challenge presented by Continental Tire (PC) crown for Mike Guasch if Colin Braun does not compete in the class (he is entered to drive the CORE autosport Porsche GT3 in GT). Jon Bennett and Tristan Nunez would also have to finish no higher than third.

One Major Milestone - The Magic 50 - Remains For Luhr

Klaus Graf and Lucas Luhr are riding a streak of seven consecutive victories that have already carried them to the P1 drivers’ championship while leading Honda to the engine manufacturer’s crown. They are also on the cusp of giving Muscle Milk Pickett Racing the P1 team title and HPD the chassis manufacturer’s championship.

One milestone remains in the final season of the ALMS before the 2014 unification. With Luhr already the series’ all-time victory leader, a victory in Saturday’s Oak Tree Classic and the season-ending Petit Le Mans at Road Atlanta on Oct. 19, would give Luhr 50 career ALMS wins.

“If we can give Lucas his 50th win that will be unbelievable,” Graf said after winning the most recent race at Circuit of The Americas. “We want to win the last two races.”

For a team that started the season without even scoring a point in the Mobil 1 Twelve Hours of Sebring fueled by Fresh From Florida, Corvette Racing’s Antonio Garcia and Jan Magnussen will be seeking their third consecutive ALMS victory in Saturday’s Oak Tree Grand Prix at Virginia International Raceway. They can also wrap up the GT drivers’ championship, but they’re not counting on it.

“In our last race, we were two points down going in and 13 points ahead going out,” Magnussen said. “If we can do that at VIR, we can win the championship. But that will be very difficult. We plan to approach the race like we’ve been doing all season. That is, to win the ones we can, and score points in the ones we can’t.”

The season opened on a sour note at Sebring. Magnussen, Garcia and Jordan Taylor experienced electrical issues early in the race in the No. 3 Compuware Corvette C6 ZR1 and then retired with three hours remaining with an overheated gearbox.

After finishing fifth at Long Beach, Garcia and Magnussen won at Mazda Raceway Laguna Seca. Since then, their worst finish was fourth at Canadian Tire Motorsport Park, with seconds at Lime Rock and Road America followed by victories at Baltimore and Austin.

“We can’t think about the championship yet,” Garcia said. “We’ll go for the win (at VIR) if we can, but we know the opposite can happen.”

Tommy Milner and Oliver Gavin won the 2012 ALMS race at VIR in the No. 4 Compuware Corvette, while Garcia ran the fastest lap and joined Magnussen in finishing eighth.

“It’s a good, fun track and our car was pretty good there,” Magnussen said. “It’s going to really help to qualify out front because it’s hard to pass there.”

Two To Go: GTC Championship Race Coming Down To The Wire

With two races remaining, the closest battle in the ALMS is in GTC, with five drivers separated by 10 points entering Saturday’s Oak Tree Grand Prix.

Jeroen Bleekemolen and Cooper MacNeil, drivers of the Alex Job Racing No. 22 WeatherTech Porsche 911 GT3 Cup, lead Flying Lizard Motorsports’ Nelson Canache Jr. and Spencer Pumpelly of the No. 45 Venezuela/eSilicon Porsche by four points, 115-111. Henrique Cisneros, in the No. 30 NGT Motorsport MOMO Porsche, is next with 105 points.

“This is a real tight championship,” Pumpelly said. “Not only are the top two very close, but the No. 30 is lurking and getting close at every event.”

Cisneros led the contenders with a second-place finish at Circuit of The Americas, where Pumpelly/Canache took fifth, one position ahead of Bleekemolen/MacNeil.

MacNeil can look to last year’s race at VIR for inspiration, where he won in the all-Porsche class co-driving with Leh Keen. Second were Cisneros and Bleekemolen, driving for NGT Motorsport. Pumpelly set the fastest race lap, finishing fifth.

“We won at VIR last year and would like to do the same this year,” MacNeil said. “I know how fast Jeroen is there, because he was right with Leh on the last lap. Our goal this weekend is to put the WeatherTech Porsche on the pole and win.”

Pumpelly feels managing the Yokohama tires will be a key to victory.

“VIR is a very tough track to get the handle on the setup and the tires,” Pumpelly said. “It’s very easy to burn off the rear tires. On one hand, you want to be ultra fast, but you also have to be patient. That’s a very narrow road to walk.”

Mike Guasch is not looking for a suspenseful conclusion to the Prototype Challenge presented by Continental Tire (PC) championship. The driver of the No. 52 PR1 Mathiasen Motorsports/Molecule ORECA FLM09 knows he can clinch the title by gaining five points (approximately two positions) on Jon Bennett and Tristan Nunez, with Colin Braun driving in GT instead of PC.

“Our job is to do the best we can – as usual – but, hopefully, we can gain two positions on them and clinch the title,” Guasch said. “What makes me nervous is that anything can happen [at the season-ending Petit Le Mans] at Road Atlanta. You’ve got to finish 70 percent of the race, and that’s a full seven hours there. If you have a catastrophic failure there, you get no points, so I’d love to have it so it won’t matter. Anything can happen at those kinds of races.”

Fans who purchased advance tickets for this weekend’s race will receive a commemorative oak tree medallion, crafted from the iconic 200-year-old tree that was felled after being struck by lightning in July.

The tree was located at the apex of Turn 12 at the southern tip of the 3.27-mile circuit, less than a half-mile from the North Carolina state line.

Even though the ALMS has only competed once at VIR, 36 of the 68 drivers entered in Saturday’s Oak Tree Grand Prix have ALMS experience at the circuit.

The list includes nine of the winning drivers for 2013: Lucas Luhr and Klaus Graf in P1; Oliver Gavin, Tommy Milner and Colin Braun in GT; Scott Tucker in P2; Jon Bennett in PC; and Leh Keen and Cooper MacNeil in GTC. The only driver not defending his victory is Christophe Bouchut for Level 5 Motorsports.

While Bill Auberlen finished fourth in GT a year ago, he returns as the leading VIR winner in the field. Auberlen won three times in the GRAND-AM Rolex Series (2002, 2004, 2005) in addition to winning in Continental Tire Sports Car Challenge Grand Sport in 2007.

Auberlen leads 14 drivers who have won 20 races at VIR in other series. Joey Hand was a two-time winner in CTSCC, winning in 2009 and with Auberlen in 2007. Graf won the 2009 Trans-Am race, setting fast race lap in the process after starting 20th. Bryan Sellers swept a FF2000 doubleheader in 2002, setting fast lap in both races.

All told, 51 of the 68 drivers entered this weekend have prior professional racing experience at VIR.

Home Race: Plenty Of Milestones For Milner At VIR

The Oak Tree Grand Prix is more than a home-state race for Tommy Milner, the lone Virginia driver in the ALMS field for Saturday’s race. Many significant moments in the Leesburg resident’s career took place at the Danville circuit.

“I won my first GT pole and I out-qualified Bill Auberlen and Boris Said to do that,” Milner recalled.

Last year, he scored the GT victory at the inaugural ALMS race at VIR and clinched the GT championship with co-driver Oliver Gavin.

“The track does have significance in my career,” Milner said. “It’s a fantastic circuit with a very pretty setting and has a traditional, old-school feel to it.”

The announcements keep coming for the inaugural TUDOR United SportsCar Championship in 2014. At Circuit of The Americas, Porsche announced the sports car marque will field a two-car factory team named PORSCHE NORTH AMERICA in the new series’ GT Le Mans (GTLM) class. CORE autosport will act as the competition partner for the program.

The effort will utilize the new Porsche 911 RSR, the same as the 2013 24 Hours of Le Mans LM GTE-Pro class-winning entries. The headquarters for the program will be at Porsche Motorsport North America (PMNA) in Santa Ana, Calif.

It is planned that the driver lineup for the season will come from Porsche’s factory driver stable for both works-entered cars.