Young Canadian to run for PR1/Mathiasen in the 12 Hours of Sebring.

Maple, ON -- David Ostella may have an open-wheel background, but the lure of sports car racing has taken hold and the Maple, Ontario native will find himself in the cockpit of the #52 Molecule/ Global Precast/ iSkin Oreca FLM09 in the PC class for the Mobil 1 Twelve Hours of Sebring Fueled by Fresh from Florida March 13-16. 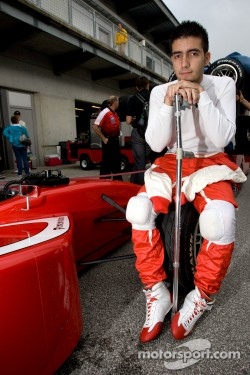 In a truly combined effort for PR1/Mathiasen Motorsports, Ostella will be partnered with Beijing native David Cheng and savvy businessman as well as 2011 Sebring PC class winner Michael Guasch to create the "perfect storm" to push the team toward the top step on the podium for the season opener for the American Le Mans Series presented by Tequila Patrón.

Finishing second last season at the complex 3.74-mile historical road racing circuit, the Fresno, California based team has been hard at work the last 12 months building and testing a program that gives them an edge on the rest of the Sebring competition in the Prototype Challenge class.

"This is an all-new and very exciting venture for me," Ostella continued. "Sports car racing is so dynamic, there's so much to absorb. Working with teammates, setting the car up for all of us and not just my driving style is something I'm learning.

Dealing with faster and slower traffic, pit stops, then the challenge of racing for 12 hours in one day on what's easily one of the world's harshest tracks is a lot to take in all at once.

New to sports cars and endurance racing, Ostella tested several different types of race cars this off-season to learn more about the nuances of the sport and hone and define his race craft.

"I only tested a few GT cars before getting into the LMPC car, and without a doubt the PC car felt much more suited to my style," Ostella said.

"It's certainly a heavier vehicle compared to the open-wheel cars that I was used to, but the brakes and the power out of the corner is incredible. It didn't take long before I had the confidence to push myself and the car to its limits on the first day, it's just that good."

Working with fellow co-drivers and a new team has been a great experience for Ostella who appreciates the camaraderie and hard work that are necessary to gain track position at such an intimidating endurance classic.

"Everyone on the team has been great," said Ostella. "We're all communicating very well, focusing on strategy, learning about our competition, and keeping up with our training routines."

PR1/Mathiasen Motorsports Team Principal Bobby Oergel has his entire organization focused on the details in 2013.

"Sebring has never been a track where you can take anything for granted," Oergel explained. "It's a tough track that beats up the car, the tires, the engine, the crew, and it's especially hard on the drivers.

The pace is relentless, and there's not much room for error, not if you want to win. Twelve hours is a long time to recover from an early setback, but we've seen that scenario force teams to play catch up for the whole event, really compromising their strategy and forcing them off of their program.

That is not our intent. We are going into this race with all facets of our organization focused on the task at hand. DC (David Cheng), Michael (Guasch) and David (Ostella) all know what to do, the crew has the car as solid as I've ever seen it, and we're ready to unload and push our program to the edge this year.

That energy, drive and attention to detail was what initially drew Ostella to the PR1/Mathiasen Motorsports machine, but the sense of "family" is what sealed the deal.

"One of the first things I learned is that PR1/Mathiasen Motorsports is a family team with a long history of driver development," said Ostella.

"I come from a big Italian family that's very close to one another and very supportive, so the team's energy is something I picked up on right away.

It's given me a lot of confidence that I made the right decision coming here and that I know they'll give me and my co-drivers everything we'll need to hunt for that top step on the podium."

Dyson Racing Partners with Mazda for 2013