Sebring, FL -- Before this year, driver David Ostella had never raced anything other than karts or formula cars. The Toronto-native graduated through the ranks of karting, Formula BMW, Star Mazda, and two years in Firestone Indy Lights.

But just a few short months ago Ostella decided to try his hand at sports car racing and take on historic Sebring International Raceway for the Mobil 1 Twelve Hours of Sebring Fueled by Fresh From Florida in the American Le Mans Series presented by Tequila Patrón. 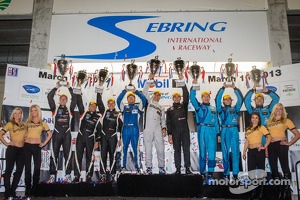 Sebring Bridge Back in January, Ostella participated in a one-day test with Bobby Oergel's PR1/Mathiasen Motorsports at Buttonwillow Raceway Park, and he enjoyed the chemistry he was able to quickly develop with the team.

It was a quick 'yes' from Ostella when Oergel offered an opportunity to compete in the Prototype Challenge class for one of the most globally significant sports car races in history.

Though Ostella only had a few days of testing in the Oreca FLM09, and no experience at pit stops, driver changes, or multi-class racing, the 22-year-old driver had no problem getting up to speed.


"It was definitely a tough field," said Ostella. "Coming into this and facing off against Bruno Junquiera, Pierre Kaffer, Colin Braun, Mark Wilkins--another Canadian--and Kyle Marcelli was intimidating."

"Off the start I had my hair on fire and I was just way too agressive and I ended up spinning off the first lap," he continued. "But I stayed out for a triple stint and was able to get the car back to pole by the time I gave it over to David Cheng.

Through the race we were just up and down and I just kept my head down and did my part to try and keep the car out front."

"It was an awesome strategy by Bobby, bringing us in to get tires and fuel early," said Ostella. "So in the end, we just had to bring it back in for a quick splash and go and were able to stay ahead of Kyle (Marcelli) coming out of the pits. We just tried to maintain the gap and lay down perfect laps."

"I am so excited I just can't believe it right now. I came into this knowing that I was the one with the least experience and then I got pulled for a triple stint, and then a double stint and it was just awesome. Such an amazing experience and I was just so excited to participate. Coming out with a win was just a giant bonus."