Perseverance pays off in Guasch’s race to prototype challenge crown

A single point decided the PC class in the final ALMS race ever.

The PC class championship went down to the wire and was decided by a single point.

"It has been an emotional roller coaster all year," said Guasch, who opened the year with a victory at Sebring. "Nothing has come easy. We've been hit, we've wrecked in warm up, taken the pole but not the race win (and) just had everything thrown at us all season. 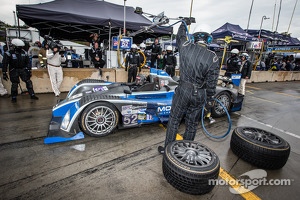 "It just shows how difficult it is to compete at this level where getting anywhere near the front takes an enormous amount of energy. It is such an incredible accomplishment by the whole team and all of our supporters that helped make this possible."

Guasch also received the ALMS Founder's Cup presented to a gentleman driver who embodies the "learn by doing" spirit of founder Don Panoz.

Cameron on Penske in LMP2: We want to learn but also race to win