The No.12 REBELLION Racing Lola-Toyota took an astonishing back-to-back victory in the 16th edition of Petit Le Mans, after last year's win. With this result, REBELLION Racing enters the history books as the last overall winner in the American Le Mans Series, as Nick Heidfeld, Neel Jani and Nicolas Prost won the 2013 Petit Le Mans. 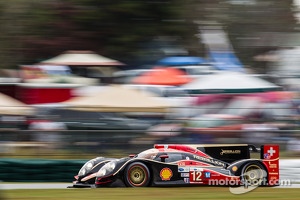 Despite a wet track, the #12 Lola-Toyota driven by Neel Jani and the #6 HPD-Honda driven by Lucas Luhr quickly escaped from the field as the race was launched to start the battle everyone was expecting. On lap 30 Neel Jani was leading the race with a 12.5 seconds gap over Lucas Luhr. Ten laps later Neel's advantage had increased to 26.3 seconds. On lap 43, Neel crashed with an LMPC car in turn one. Despite big damage on the #12 car and a stop and go penalty, the #12 Lola-Toyota was back in the race just two laps down to the #6 HPD-Honda. With strong driving from Neel, Nicolas and Nick in changing and challenging track conditions and supported by smart strategy calls from the team, the REBELLION Racing car was back on the lead lap by mid-race.

But all hopes for a great battle until the checkered flag were over when, after 200 laps, the #6 HPD-Honda was forced to stop in the pits then to officially retire shortly after due an irreparable overheating problem.

From that stage, the REBELLION Racing drivers and team opted for a safe strategy until the finish line.

After 9 hours and 37 minutes of racing and 394 laps completed, the #12 Lola-Toyota entered the records books as the last-ever overall winning car in the American Le Mans Series driven by Neel Jani, Nick Heidfeld and Nicolas Prost.

Neel Jani : "I was very lucky with the crash as I didn't see the car I hit. The car was in my blind spot. My teammates did a great job to catch up with the HPD-Honda. When I took the wheel back later in the race it was much easier. It's a nice feeling to win a second time the Petit Le Mans."

Nick Heidfeld : Before coming here everybody told me that Road Atlanta is a great track and Petit Le Mans a big event. Even if it is not the oldest one on the calendar, Petit Le Mans has a fantastic reputation, a race you want to win. This win ranks quite highly for me. On top of that, it was the last ALMS race that makes it more special.

Nicolas Prost : "I pushed as hard as I could in drizzling conditions and took some risks in traffic. We got back in the fight. Winning here again is a great feeling, it was one of my main objectives this year. It's great for REBELLION. I am happy to share this win with Neel as it was his last race with the team."

Bart Hayden, REBELLION Racing Team Manager : "We gave ourselves a little bit of trouble to make life more difficult when we had the crash early on. To come back from that, to drive well, to put pressure on the opposition and to win a second time is a tremendous feeling. It was the objective, the only reason we came here. It is well deserved by the drivers and the team. I hope our team mates in Japan, at the race in Fuji, will have some of the fortune we had today. We've loved our races in the American Le Mans Series, it's been a well organised and well run operation, I wish all the people here that go forward into the new United SportsCar Championship much success and we'll be watching how they get on."

Petit Le Mans: to everything there is a season