“I knew it was going to be pretty close, but that’s what makes it so interesting,” said Smith, who took his eighth career ALMS pole. “Klaus and Lucas are absolutely first-class drivers, and to beat them, you really need to be on your game. It’s great to be on the pole position, but tomorrow’s another day. We’ve got to sit down and plan to see how we can beat them in the race. It’s been a pretty tough year for Dyson Racing, and this will be my last ALMS race, so I want to go out with a good one.”

Graf and Mowlem will take a six-race winning streak into the event, after having a five-race pole streak come to an end in qualifying.

“It was exciting qualifying, even if it’s not the way we wanted it to be,” Graf said. “We couldn’t quite get the performance out of the car that we wanted, but we’ll keep working on it. It’s a long race tomorrow.” 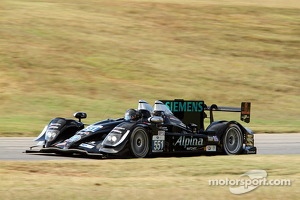 “For me, this is one of the most exciting tracks to qualify at, because there are really high speeds and you can go quick with the downforce,” Briscoe said. “My job is really simple tomorrow – I get in for Scott (Tucker) and drive it home for the win.”

Dane Cameron led the Prototype Challenge presented by Continental Tire qualifying, winning the pole with a lap of 1:41.854 (115.577 mph) to edge out Tom Kimber-Smith.

“We have a really good car for the race,” Cameron said. “It was nice for us to be quickest during both of today’s (practice) sessions, so it should make for a fun race tomorrow. Hopefully we’ll be able to turn this around into a win.”

Cameron is looking to help Mike Guasch, co-driver of the No. 52 PR1 Mathiasen Motorsports Molecule ORECA FLM09, capture the PC title on Saturday. Kimber-Smith ran a lap of 1:42.105 (115.293 mph) to briefly lead the session, but wound up second in the No. 05 CORE autosport Composite Resources ORECA FLM09 co-driven by Jonathan Bennett. To remain in title contention, Bennett cannot lose more than one position to Guasch in Saturday’s race.