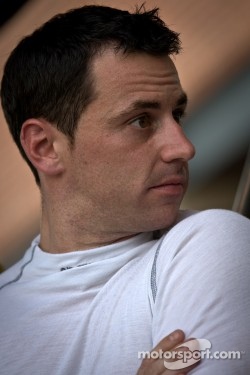 POUGHKEEPSIE, NY February 27, 2012 -- Steven Kane will be joining Chris Dyson and Guy Smith in the debut of the new #16 Lola B12/60-Mazda at the 60th Annual Mobil 1 Twelve Hours of Sebring on March 17. Steven Kane joined Dyson Racing at last year's Northeast Grand Prix at Lime Rock Park in the #20 Dyson-Oryx entry, qualifying second and finishing third in his inaugural ALMS race. He raced the rest of the year and claimed his first win at the Baltimore Grand Prix, a one-two finish for the team.

"Steven opened up many eyes last year," commented Chris Dyson. "On tracks he had never seen before, in a new car, he was always quick right off the bat and impressed everyone on the team. He made a name for himself in short order and Guy and I are glad he will be back with us for the Sebring race. He is a Dyson driver in every sense of the word: talented, determined and fast with a personality that has fit right in with our group from day one."

"It is great to be back with Dyson Racing and with Chris and Guy," said Steven Kane. "It is a privilege to come back and drive with the two champions of the ALMS. This will be my first time at Sebring and it is a race that I have always wanted to take part in and have heard so much about over the years. With the World Endurance Championship joining us, there will be a lot of new cars and with our new Lola, it will be an exciting time for everyone. I just can't wait to get there, learn the track and be part of such an iconic event."