Luhr and Graf led all the way in the No. 6 Muscle Milk Pickett Racing HPD ARX-03c, completing 83 laps over the two-hour, 45-minute race. Luhr extended his ALMS-leading victory total to 48. The winners averaged xx mph in the race, run start to finish under the green flag.

With the ALMS competitors racing on the sparkling 3.4-mile layout for the first time, teams had the opportunity to test on Tuesday and Thursday under warm conditions. Muscle Milk Pickett Racing opted not to test – taking to the track for the first time on a rainy Friday for practice and qualifying. 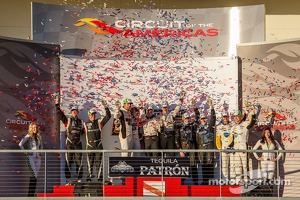 “Lucas took the lead going into the first corner, and took off from there,” Graf said. “With little to no dry running, hats off to the team and the setup. We’ve really put together an excellent package. Now we want to win the last two races – especially Petit Le Mans – and if we can give Lucas his 50th win it would be unbelievable.”

Tony Burgess and Chris McMurry finished second in the No. 16 Dyson Racing Mazda/Thetford/Norcold Lola B12/60. Katherine Legge and Andy Meyrick completed the P1 podium, despite falling out in the closing minutes in the debut of the coupe version of the No. 0 DeltaWing DWC-13.

Level 5 Motorsports rebounded from an early challenge by Extreme Speed Motorsports to place 1-2 in the P2 class. Scott Tucker won for the sixth time this season, co-driving with Ryan Briscoe in the No. 551 Siemens/Alpina Watches/Ohiya Casino Resort HPD ARX-03b. Marino Franchitti and Guy Cosmo placed second in the team’s No. 552 entry, 5.279 seconds behind at the finish.

“It wasn’t very dramatic for us, which was nice for once,” said Tucker, whose 24th career victory came one race after a major disappointment at Baltimore, when a first lap accident ended his day. Unofficially, Franchitti now leads Cosmo by four points (141-137), with Tucker third with 129 points.

“The competition is so good and so close, you have to be ready from the get-go,” said Marcelli. “This is the best of the best, and you have to bring your ‘A’ game to win races. We’ve had little mistakes in each race that cost us ... this was a mistake-free race.”

Mike Guasch captured the points lead in the class after finishing second, co-driving with Dane Cameron in the No. 52 PR1 Mathiasen Motorsports Molecule ORECA FLM09.

In a race that ran start-to-finish under the green flag, Compuware Corvette Racing driver Antonio Garcia held off repeated challenges by BMW driver Dirk Muller and SRT Viper driver Jonathan Bomarito over the closing 30 minutes to take the ALMS GT class victory in the International Sports Car Weekend at Circuit of The Americas.

Garcia took the third triumph of the season in the No. 3 Compuware Corvette Racing Corvette C6 ZR1 started by Jan Magnussen, and gave them the lead in the championship with two races remaining after Corvette Racing teammates Tommy Milner and Oliver Gavin went out early with mechanical problems.

With the clock running down, Muller got side-by-side with the leader several times in the No. 56 BMW Team RLL Crowne Plaza BMW Z4 GTE started by John Edwards, but couldn’t make the pass. Bomarito then passed Muller for second with five minutes remaining in the No. 93 Pennzoil SRT Viper GTS-R started by Kuno Wittmer, and closed to within .854 seconds of Garcia at the checkered flag.

“I had Dirk on my bumper with 30 minutes to go, and I thought it was going to be a long 30 minutes to try and hold him off,” Garcia said. “Then there was a quick cluster of traffic, so I went aggressive to try to get him stuck in that. Then I got a good gap and they were never able to get the gap back. This was our second victory in a row – which is very rare for us – so we’re very happy to win today.”

Tommy Milner and co-driver Oliver Gavin entered the race with a two-point lead in the GT standings. However, Milner began experiencing transmission trouble as early as Lap 4, and pulled off and retired shortly before the one-hour mark – not logging enough time to score points. As a result, Magnussen and Garcia now unofficially lead Muller by 13 points (112-99), with Milner and Gavin at 94.

Both the GT and GTC classes were hotly contested in the closing half-hour – and with five minutes remaining, the GT leaders lapped their GTC counterparts. Sean Edwards was leading the GTC class in the No. 30 NGT Motorsport MOMO Porsche 911 GT3 started by Henrique Cisneros, but was bumped wide by Garcia as he went by.

“That was basically a race-long battle with Sean Edwards in the No. 30 car, and we were miles ahead of the third-place car,” Faulkner said. “I knew Sean was a bit harder on the tires, so I knew the gap would come back to me. With 20 minutes to go, I really started pushing. It was a fantastic battle. He got in the mix with some of the GT cars, got out in the dirt and I was able to get him back.”

Andy Lally took third place in the closing minutes to join Patrick Dempsey on the podium in the No. 27 Dempseychallenge.org Porsche 911 GT3 Cup, giving the pair their second top-three finish of the season.

The next ALMS event will be at Virginia International Raceway on Oct. 5, the last race before the season-ending Petit Le Mans at Road Atlanta on Oct. 20.

Dyson Racing: Red, white and blue (and Wet) in the heart of Texas