Race car drivers tend to have much better stories than the rest of us. Here are some humorous recollections from James Weaver, who drove for Dyson Racing for 20 of his 30 years in racing. 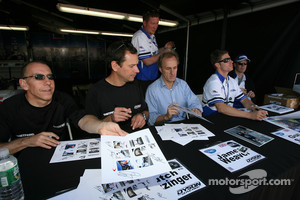 Driver’s senses of humor
Andy Wallace had the driest sense of humor. His was the most off-the-wall of all drivers I have driven with. He looks so straight and serious and he does come out with some real show-stoppers. He is very good at put downs. He sounds perfectly polite and then you say, wait a minute, what did he just say?

I never saw Butch Leitzinger in a bad mood. He was always unfailingly good humored. Andy and I thought that much of the time, Butch looked at us like he was thinking, ‘What are these two lunatics up to now?’ and decided that humoring us was the safest policy.

Price Cobb was fun to be around. All drivers have different personalities and are each fun in their own way, but I would say Price, being a Texan, is larger than life. Price was very outgoing and a great joke teller and was always good for a laugh. He has a lovely manner about him: no matter who he is talking to, he always makes them feel at ease. He was always great with Chris and Molly when they were little. Whenever he would go to Rob and Emilie’s house, he would always play baseball with Chris.

I used to share a room with Price. One time at Elkhart Lake, I woke up in the morning and could not move, and was wondering what was happening. I was totally covered in pillows and cushions. Price had taken everything in the room and had thrown it at me to stop me from snoring! 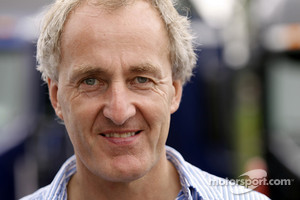 Rental cars
I rented a Ford Mustang once that I actually managed to get stuck on top of a wall in a car park, which was a source of a huge amount of amusement to Butch and Andy. They were in one car and arrived at the car park, and I thought I would just left-foot brake the car, spool up on the throttle and spin turn it and stop right next to them - just like in the movies! But when I put my foot on the brake and accelerator, rather than allowing me to brake and accelerate at the same time, it switched the engine off. So I thought, ‘Well, that did not work’, so I took my foot off the brake and the thing lit up and shot forward and went over the concrete wheel stop and landed on top of a half wall. Andy and Butch were thinking, “That was impressive, he must have meant to do that”, and I was quite embarrassed, being stuck on top of the wall. So I backed it off the wall and of course it did a job on the radiator and the underside of the car. I returned it to the rental car company and said I needed another car as this one was not running very well. I said I had a bit of problem parking and hit one of those concrete wheel stops. I left out the part about the wall and she said, “Don’t worry – a lot of tourists have problems with those wheel chucks.”

Rob Dyson
One of the funny things that sticks in my mind happened at Mid-Ohio when we had the Riley and Scott. Butch was in the No. 20 car and I was in the 16, and we were racing for the win with only a couple laps to go. Butch came flying down the front straight in front of the pits, and on the inside of me going into Turn One. Pat Smith, the crew chief at the time, turned around to Rob and as the cars went past, there were pieces of carbon fiber flying off the sides as we were rubbing on each other, and he says, “Oh, this should be exciting,” and Rob turns around and says to him, “Never mind that, how much is it going to cost me?” Actually in the end, it did not end up costing him that much as the damage was mainly cosmetic. Even though we bumped into each other in the first corner, we kind of staggered out the other side and I had just a bit more momentum and managed to beat him. 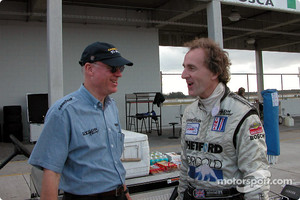 I use to share a room with Rob. He used to have a habit of saying “Jamesey boy, are you awake?” “Well actually now that you have asked that, funny enough I am.” He would also get up at two or three in the morning and turn on all the lights and pace up and down the room and ask me if I was awake, and I would say “Yes, governor.” “Well, you need to get some rest,” and he would turn out the lights and go back to bed.

I remember racing in San Antonio for Bayside, back in 1989. I was driving Indycar that year for Rob and the Dyson 962 was not at San Antonio. I was with my wife, and I rang Rob up from San Antonio for a chat and told him how brutally hot it was and he suggested going to New York City. He said “You must go to the theater, and I will sort out some tickets for you.” He organized tickets for Phantom of the Opera and we had a really nice night out. Here you have a very busy man and he took the time out to take care of us. Just very thoughtful.

Pat Smith \I always thought that Pat Smith was one of the all-time great crew chiefs. He was highly intelligent, and as an engineer, he had the technical knowledge, but also the feel and intuitive gut feel for how to balance all the compromises into a race-winning setup. He did a fabulous job when he was Rob’s crew chief, both technically and getting the maximum results with the resources at hand. I remember Pat saying to me once, ‘Anyone can win if they spend enough money.” He is a lovely chap and one of nature’s true diamonds.

Talking about his sense of humor, my favorite Pat story is from Watkins Glen. On race morning, I was driving to the track with Andy Wallace. Andy is not at his best first thing in the morning. He also hates morning warm-ups. To make matters worse, the weather was dire and the clouds were literally sitting on the ground and visibility was 20 yards. This presented itself as a perfect opportunity to wind Andy up… which I duly did. By the time we got to the track, he was fizzing. The moment he saw Pat, he didn't even say good morning. He just launched into a massive rant and basically said that he refused to do the warm-up. Pat said nothing. Andy extended the remit of his rant. Pat still said nothing. This tipped Andy completely over the edge and he doubled down on his histrionics. When he had finished, Pat simply said “Warm-up is cancelled!”

Practical Jokes
Hans Stuck was a great practical joker. He and Dieter Quester used to play a lot of practical jokes. When they were doing Formula Two together, it was raining at one race and they were just going out to the grid, and Hans was spraying his helmet with anti-fog, and Quester says “I will have some of that.” Just by sure chance, there was a can of black spray paint. Stuck gave it to him, and Quester ended up spraying his visor with black paint.

Another time, Stuck was having a party and Quester was late. Quester arrived and Stuck took off his clothes when he saw him coming and then took him aside and said, ‘You have to take your clothes off for this party.” Quester said ‘Great’ with anticipation and took all of his kit off and walked into the room and of course, everyone was fully dressed!