TRG looks to capitalize on momentum at Mosport

(Petaluma, CA – July 16) After a podium two weekends ago at Lime Rock Park, The Racer's Group is doubling down on its chances to capitalize on that momentum this weekend at Mosport's American Le Mans Series Mobil 1 Sports Car Grand Prix with drivers Alexander Popow and Ryan Dalziel joining the team in the No. 68 car.

The duo is currently tied for the lead in the prototype class of the Grand-Am Rolex Series, but are making the move over to the ALMS GTC class in the Porsche 911 GT3 Cup car at the historic Canadian road course.

After ALMS Round Three at Laguna Seca in mid-May, TRG spent the 45-day break performing extensive testing. It paid off immediately with both cars finishing in the top five at Lime Rock. Now, the team looks to improve on that result in Canada.

Ben Keating and Damien Faulkner return to the Port Lavaca Auto Group/Viper Exchange/Adobe Road Winery Porsche, which finished third just a few weekends ago, and their confidence is running high after the solid run. 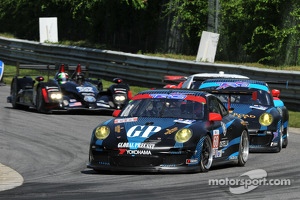 Popow and Dalziel have experience at the highest levels of racing, running prototypes in ALMS and other series, including the WEC. Popow won the North American Endurance Championship last year, and the class championship in ALMS, as well as being named Rookie of the Year in both ALMS and Grand-Am.

Dalziel also came off an incredibly successful year, having won the 24 Hours of Le Mans in the LMP2 class in 2012, as well as the team championship in WEC. In the American Le Mans Series he was victorious at Petit Le Mans and won the North American Endurance Championship in Grand-Am while finishing runner-up in the driver standings.

Needless to say, both cars will be gunning for the win at the famous Canadian track where TRG has fared well in the past, including an incredible one-two finish in 2011.

Kevin Buckler on his history with the Canadian road course:
"I am really looking forward to this weekend's race and I usually don't say that about Mosport! This is one of the longest treks across the country for our team and sometimes can be a bit tough logistically, but it has also been the site of some of our best performances. I won the GT race here 10 years ago as a driver and we finished with an amazing 1-2 two years ago in this class. With all of the hard work we have been putting in for Ben and Damien and with the addition of Alex and Ryan for this weekend, quite honestly, that is what we are gunning for: the top two steps of the podium! This is a fantastic driver lineup and our team is ready."

Ben Keating on Mosport and driving with Damien Faulkner:
"I have never raced at Mosport, but I am extremely excited about it. I love tracks like this. I think this track suits my driving style. Damien has been on the pole at this race for the past 2 years, and we will be looking to make that three in a row. Damien has been a great teammate. He is quick in the car, but also a great coach. Most importantly, Damien is a good guy and we have fun working together. We have both been frustrated with the start of our season, but we are working hard to turn that energy into a dominant second half of the season."

Ryan Dalziel on running with TRG at Mosport:
"We raced there in PC and finished on the podium last year, and it’s definitely up there as one of my favorite tracks. I’m looking forward to running with TRG, as I’ve known them for a long time, and Kevin is one of the first people I got to know in sports car racing. I usually do about one race per year in a GT Porsche of some kind, and I’m excited to be racing again with Alex Popow. It will be a hard weekend for us, running with the big sports car drivers, but we’re up for the challenge!"

ALMS 2000: Audi arrived in America and beats BMW and Panoz