A final caution helped put the No. 66 with Damien Faulkner in third to finish the race, while Craig Stanton was just behind in the No. 68 finishing fourth.

LIME ROCK, - The Racer's Group made the most of some perfect weather this weekend at the famous Lime Rock Park short course, and came away with a podium result. It was the sixth podium in the team's history at Lime Rock and the first of the American Le Mans Series season for TRG, and one the team hopes starts a trend going forward with the remaining six races. 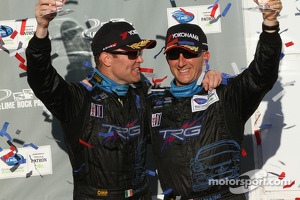 The race started with Ben Keating in the No. 66 Port Lavaca Auto Group/Viper Exchange/Adobe Road Winery Porsche GT3 Cup in third after a great qualifying session from co-driver Damien Faulkner.

After some contact, the team faced an uphill battle to get back in the hunt, but Ben buckled down and put in extremely quick laps to allow Damien Faulkner a chance to put the finishing touches on a great comeback. With less than twenty minutes left, TRG found themselves running fourth and fifth when a caution flag bunched the field back up.

Capitalizing on the opportunity, both drivers ignored the extreme heat and pushed for a podium. A final caution helped put the No. 66 in third to finish the race, while Craig Stanton was just behind in the No. 68 finishing fourth.

In the Grand Precast No. 68, a difficult qualifying session left it starting in the back of the GTC class, but over the course of the race, it slowly moved its way up. Craig Stanton put in solid, consistent lap times yet again, but the real surprise was David Ostella.

Ostella, who is making the transition from open-wheel to Porsches, won at Sebring in the PC class this year, and was making his TRG debut with the team. Throughout the weekend he drove smart and fast and his lap times improved every session, showcasing his maturity and ability to run with the leaders.

Kevin Buckler on the podium: "I was really proud of the team this weekend. Everybody worked really hard and you could feel the chemistry was strong. We have tested multiple times over the last few months and made a lot of progress on the cars. Traditionally we are strong here at Lime Rock and today was no different. Without a little mischief in the first stints, we had cars capable of running up front today and that was nice--- considering how incredibly talented and deep this field is."

In a eventful race at Lime Rock, Martin and Auberlen finished in 4th place