Virginia is for Michelin 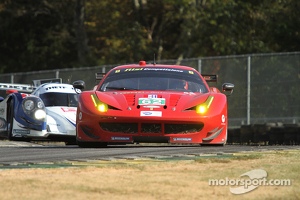 It was a crazy eighth win in a row for the Muscle Milk Pickett Racing Honda team and drivers Klaus Graf and Lucas Luhr.

The 2013 P1 class champions fought a race long battle over the 3.27-mile circuit with the pole winning Dyson Mazda Lola of Guy Smith and Johnny Mowlem. The decisive move came when the Muscle Milk team made a late break for the pits during a caution period with 65 minutes remaining. Taking the win in P2 and third was the Level 5 Honda of Scott Tucker and Ryan Briscoe.

With temperatures in the mid 90’s on a hot, sunny day here in southern Virginia, track temperatures reached 116 degrees, but Michelin provided the right tires to help its technical partner teams from Ferrari, Porsche, Corvette, BMW, and SRT Viper combine to sweep the top seven spots in the GT class.

After a frustrating string of races, the Risi Competizione Ferrari 458 Italia, driven by former champion Olivier Beretta and series newcomer, Matteo Malucelli, had the speed and the consistency to prevail in a battle that saw seven different cars from five different manufacturers lead the GT class at some point in the two hour- 45 minute race.


Matteo Malucelli: “The car was really good. We had good pace and came back from fourth place after our pit stop to the lead. I could pass everybody. After the earlier struggles, this was good for the team. We needed a win and we are extra happy for Ferrari and Risi, for Michelin, and for the team.”

Chevrolet and Corvette Comments on championships:


Gary Pratt of Pratt & Miller: “Our number one goal each year is to win the manufacturer championship,” said. “GM expects a lot out of us and we expect a lot of our engineering and mechanics and crew chiefs and technical partners. Sometime we are not the fastest car, but somehow we get it done.”

Doug Fehan. Corvette Racing program manager: “The ALMS is recognized as the most competitive GT racing in the world. Look at every race. We were 8th and 9th on the grid here and we still ran up front. The beauty of continuity is that we develop a deep understanding and we fight on.”


Ken Payne, technical director, motorsports, Michelin North America “Seeing all of our technical partner teams able to perform so well on a highly technical natural terrain circuit is very pleasing to us and to our Michelin engineers, tire developers and staff. We congratulate the Risi Ferrari team on its first win since their return to the series and Level 5 on clinching the ALMS P2 Team championship.

“This is already our tenth year as a technical partner with Corvette Racing and we once again congratulate Chevrolet and Corvette Racing on securing their respective ALMS GT Manufacturer and Team championships.”