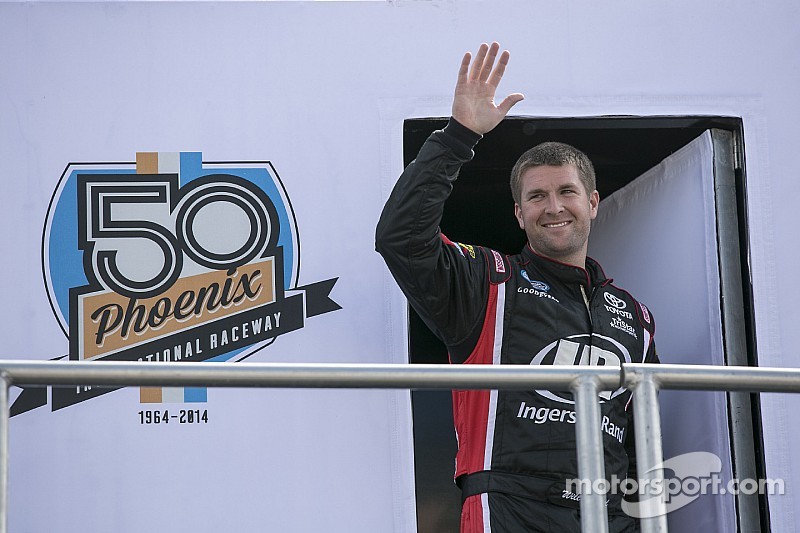 Two famous names, each looking for their first career victory, battled it out at Pocono Raceway for the ARCA win in the ModSpace 125 Friday evening, with the race starting an hour late due to rain.

In the end, Justin Allison, grandson of NASCAR legend Donnie Allison, took the victory over Will Kimmel (in photo above), whose uncle, Frank Kimmel, has won multiple championships in the series.

Allison, whose great-uncle is NASCAR champ Bobby Allison, is running a partial schedule, and has only two more races scheduled this season. “And we’re going to try and win them both!” he said in victory lane.

Neither driver was the fastest on the track, but they were among the drivers who took advantage of a caution flag to refuel. Likely the other racers thought there would be another caution – this one was for a crash between Frank Kimmel and Grant Enfinger, when Enfinger inadvertently forced a charging Kimmel into the grass – but there wasn’t, forcing the front-runners like polesitter Mason Mitchell and Brennan Poole to pit under green for gas. Kimmel was able to get past Allison, but Allison repassed him for the win.

In qualifying earlier today, driver John Wes Townley crashed and was taken to the hospital. He was treated and released, but officials required him to sit out not only the ARCA race, but the NASCAR Camping World truck race, also at Pocono, on Satuday.

Next up is the Federated Auto Parts 200 at Berlin Raceway in Michigan on August 9.

Is it time for NASCAR to consider a spec engine?