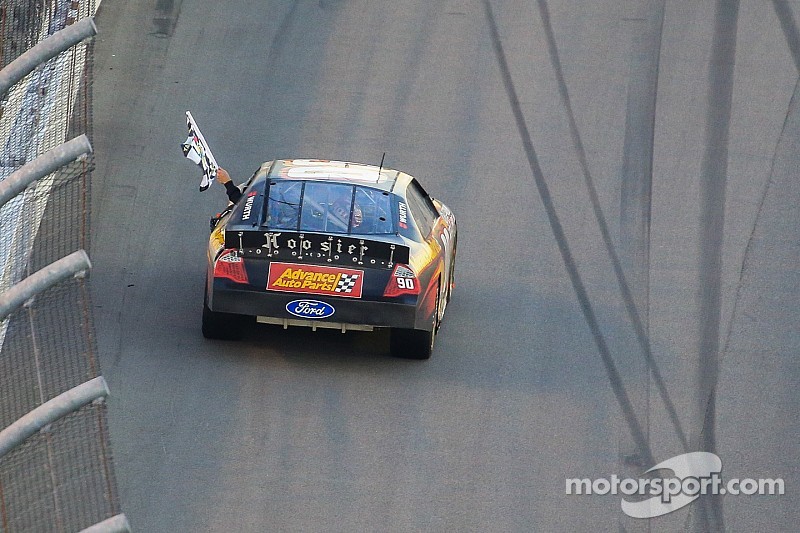 Wins his fifth race of the season.

"This one is huge for so many reasons," Enfinger (in photo, from a previous event) said after winning his fifth ARCA Racing Series presented by Menards race of the 2014 season. "Our crew chief, Ryan ("Pickle") London lost his step-father this week. It's a wonder he even made it here tonight, but it shows what a great leader he is of this team."

Enfinger led 181 of 200 laps in dominating the race at the 0.438-mile short track. Austin Wayne Self finished second for the second time in three weeks, Brennan Poole came home third, Kyle Weatherman made a late surge to finish fourth and Tom Hessert earned a top five.

Enfinger started second, but shot past Menards Pole winner Mason Mitchell for the lead by the time the cars hit the backstretch and held it for most of the race. He slipped back and out of the top five at one point, but a four-tire pit stop that saw him come back on the track in second place was the key, he said.

"This GMS pit crew worked their butts off tonight and gave me a great pit stop," he said. "We went in fourth and came out challenging for the lead. They just did a great job in the pits. And, my spotter, Joey Coulter, did a great job getting me through some lapped traffic and changing my lines a couple times. I'm so happy for everyone on this team Motor Honey/Casite-Allegiant Travel Chevrolet team."

Enfinger moved to within 25 points of Mitchell, who finished 10th and kept the series point lead after 14 races of the 20-race season. The series heads to Springfield next weekend for the first of two dirt track races of the season.

As always, Self brought a big following of family and friends to the western Michigan track. They watched the No. 22 AM Technical Solutions Dodge come home second.

"I think they are getting tired of me coming in second," he said. "They all told me they want to see me win one of these. We had a great car tonight. Everyone at Cunningham worked so hard on this car. Grant just had a great car."

Poole, subbing for John Wes Townley in the No. 15 Zaxby's Toyota, finished third, one spot ahead of Weatherman, in the No. 60 Roulo Brothers Racing Ford.

"I will tell you what," Weatherman said, "the Roulo Brothers never quit. I don't care if we were in dead last, they still want to get back out there and race and make the car better. They kept working on things all night and gave me a good car. I was hoping for a caution there late. We might have had something for those guys."

"It was a nice top five finish," Hessert said. "We had a really good first run, but we were too tight on the second set of tires. All in all, though, the car was good. We're happy with fifth."

Kimmel started 12th and finished sixth in the No. 44 Ansell-Menards Toyota.

"It was a challenge, mainly because of where I qualified," he said. "The guys at Win-Tron gave me a good car, I just had a bad qualifying run, then we had to race real hard to get to the front."

There were five cautions for 30 laps in the race, which took 1 hour and 17 minutes to complete. Karl Weber led the first laps of his career in the No. 3 Silveus Insurance Group Chevrolet and Thomas Praytor brought out one caution by damaging the rear end of his No. 2 DK LOK Ford. Self led three laps and Boston 13.

Enfinger said he had a representative from one of his sponsors that moved with him from Team BCR to GMS Racing last month (Motor Honey/Casite) at the race plus the Grand Rapids area is home to an important hub for Allegiant, another major sponsor on the car.

"Things just couldn't have come together better," Enfinger said of his visit to Michigan. "This whole team just pulled together tonight. The team did all of the right things."

The ARCA Racing Series presented by Menards races at the Illinois State Fairgrounds on Sunday Aug. 17 in the Central Illinois SuperChevyStores.com 100. It will be the fifth race in five weeks for the series.