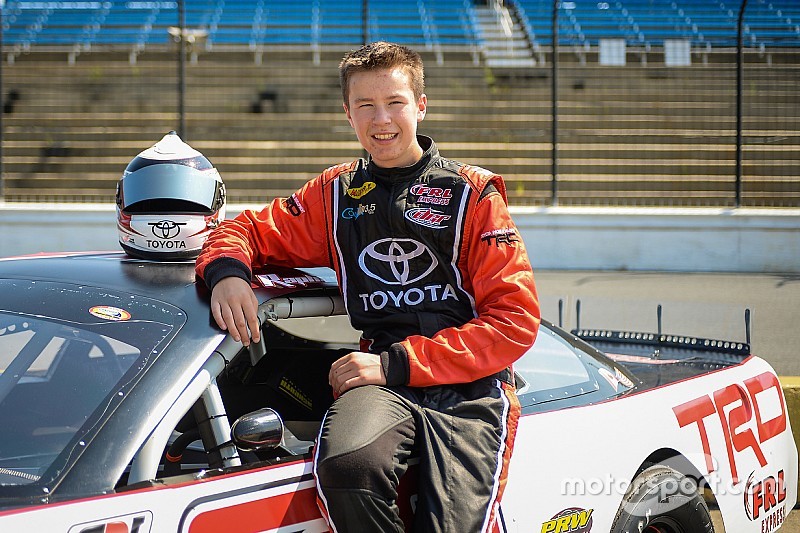 While Raphaël Lessard is not the first driver from Canada to move South and try his fortunes in stock car racing, the fact he’s so young and very talented is something to watch.

From becoming the youngest competitor in the Quebec Sportsman Series to competing against the likes of Denny Hamlin in the PASS North Series to most recently winning the 2016 CARS Tour Super Late Model division title, the 15 year-old from St-Joseph-de-Beauce, Quebec, Canada is someone to keep an eye on in 2017.

Lessard will once again compete for David Gilliland Racing this season in different events up and down the East Coast and he’ll also move up to the ARCA Series for three races later this year.

The schedule is all part of the plan for the teenager to continue his development.

“We partnered up with Robert (Desrosiers) to help us in the U.S. has he’s had experience working with Canadian drivers,” said Lessard. “My parents have worked hard to help give me this opportunity and I want to make the best of it and hopefully keep moving up in my driving career.”

The 2017 schedule is an ambitious one as Lessard is tentatively scheduled to compete in at least 23 races, including the ARCA starts.

He won his first touring series championship last year in the Cars Tour with four wins and eight top-10 finishes driving his No. 99 FRL Express/Team Coach Imaging/Toyota/JBL Audio Toyota Camry. Lessard will kick off his season next week at the CRA Series SpeedFest at Watermelon Capital Speedway in Georgia.

This will be the first of five different divisions Lessard will compete in this season with races scheduled in the CRA, Cars Tour, Pass South, SSS and ARCA series.

One big surprise last year was when Toyota signed Lessard to participate in its developmental program. While Lessard knows that doesn’t guarantee him a ride in a car, the fact that he got noticed meant a lot to him and his family.

“My goal last season racing at David Gilliland Racing was to just get experience and seat time in the car and do the best I could driving each race,” Lessard said. “After I got off to a good start last year we decided to run for the championship and it worked out for us.”

With his success on the track last season, Lessard said it was a shock when Toyota decided to sign him as a development driver.

“I could have never dreamed of this opportunity when I moved down here to race last year,” he said. “I think being a part of this great team and the success we had on the track right away had a lot to do with it and I’m very grateful for the chance I’ve been given.”

The teenager juggles his school responsibilities by attending classes when he’s home in Quebec and working online to complete his course work while he’s racing in the US. Chris Janosko, team general manager at DGR let the driver stay at his house with his family.

“I’ve been friends with David and his family for a long time and it works out so Raphaël’s parents know he’s staying somewhere safe while he’s down here learning in the shop and competing in races,” Janosko said. “Raphaël is a very talented driver and we look forward to working with him again this year on our team.”

Lessard knows competing in a different series numerous times this season will be a challenge but he’s ready.

“My dream is to someday compete in the Monster Energy NASCAR Cup Series and I feel like Robert, my family, David Gilliland Racing and Toyota-TRD are going to help me get there,” Lessard said. “This year will be tough but I’m going to take the same attitude I did last year of just doing the best I can each race and learn every time I’m in the race car.”