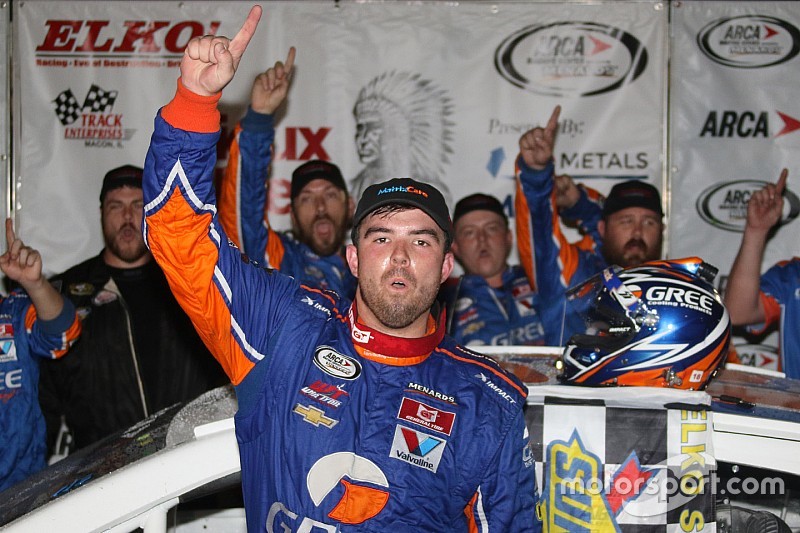 It didn’t come easy – nothing has this season – but Gus Dean earned his first ARCA win in dramatic fashion on Saturday.

Dean spun early in the race and had to come back from two laps down only to see a late red-flag set up a final three-lap shootout to the finish, where he held off an aggressive charge from Joe Graf Jr.

“I can’t tell you what this means to us. We needed this so bad,” Dean, 23, said after the victory at Elko (Minn.) Speedway. “We’ve had incredibly fast race cars this year. It feels so dang good.”

Dean’s crew chief, Jamie Jones, made a bold call to leave Dean out on old tires following the second caution of the race. His competition mowed him down on the restart and he eventually fell two laps down and also spun out once.

Dean methodically worked his way back to the lead lap with the help of additional cautions and thanks to the earlier pit call, had an extra set of new tires with which to compete for the win.

“Jamie Jones is the best crew chief in the garage hands down. The strategy was bold, and it seemed like it was going to backfire – but we weren’t going to go down without a fight and we won the race,” Dean said.

“I’m also really happy for my car owner, Kevin Cywinski. Elko is his hometown track and he really helped me get around this place. I was so glad to get him a win on his home turf.

The win is Dean’s second in ARCA, with his first coming in 2016 at Talladega (Ala.) Superspeedway. He is currently sixth in the series standings.

“We’re not done yet,” Dean said. “We’re going to try and do this again next weekend at Berlin with this same car.”