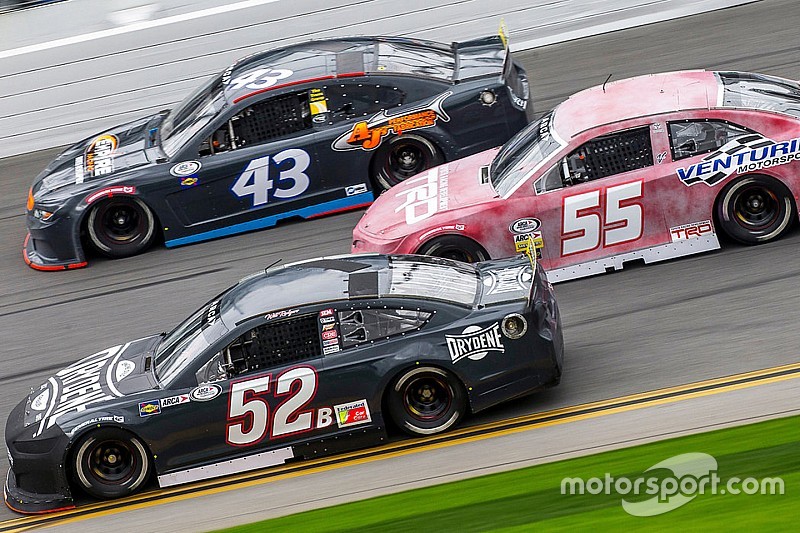 Hessert, driving the No. 55 Toyota for Venturini Motorsports, posted the fastest average lap speed (185.258 mph) of the 62 drivers who took at least one lap.

Hessert, who drove fives ARCA races last season for Venturini, won the pole for the Daytona season opener last season and finished fifth in the event.

He has never won the Daytona opener but did capture a victory at Talladega (Ala.) Superspeedway in 2014.

“The car handled the same during the run, whether we were towards the front, in the middle, or out back,” Hessert, 31, said. “I’m really looking forward to next month.”

Mason Mitchell Motorsports rookie teammates Quin Houff and Blaine Perkins paired-up for the second and third fastest runs of the two-day test. Houff posted an average lap speed of 185.189 mph while Perkins came in at 184.820 mph.

Gus Dean, preparing to run his second full-time ARCA season this year, ended up with the fourth-fastest speed (183.772 mph).

“These cars break through the air bubble between cars easier than the old cars,” said Dean. “You really have to watch your closing speeds on these cars.”

Dean hasn’t finished better than 32nd in two career starts at Daytona but earned his first ARCA win at Talladega in 2016. He finished sixth at Talladega last season.

The biggest surprise of the test may have been veteran Dave Mader III, who turned in the fifth-fastest speed of the test (183.352 mph). Mader, 62, last made an ARCA start in the 1994 season. His lone series victory came in 1992 at Michigan.

“The last time I was (at Daytona) was in 1991 racing in the Twin 125s trying to qualify for the Daytona 500 ... we ended up wrecking,” Mader said. “I was at the back of the pack and we sucked up really well to put that lap up on the board.”