The Honda Racing India team notched up another podium in the Chennai round of Asia Road Racing Championship on Sunday, but the ouftit’s local rider Rajiv Sethu narrowly missed out on a points finish.

Competing in the flagship Supersport 600cc category for Honda Racing India, Japan’s Taiga Hada made a rocketing getaway to jump up to second position at the start of the race.

With former MotoGP rider Anthony West checking out at front, Hada got embroiled in a close battle with Zaqhwan Zaidi and countryman Tomoyoshi Koyama.

The trio traded places at several occasions and although Hada started the final lap in second position, he was demoted by Koyama and ended up third.

Nevertheless, the result was enough for Hada to secure his and Honda India’s second podium finish of the weekend after they also finished third in Race 1. 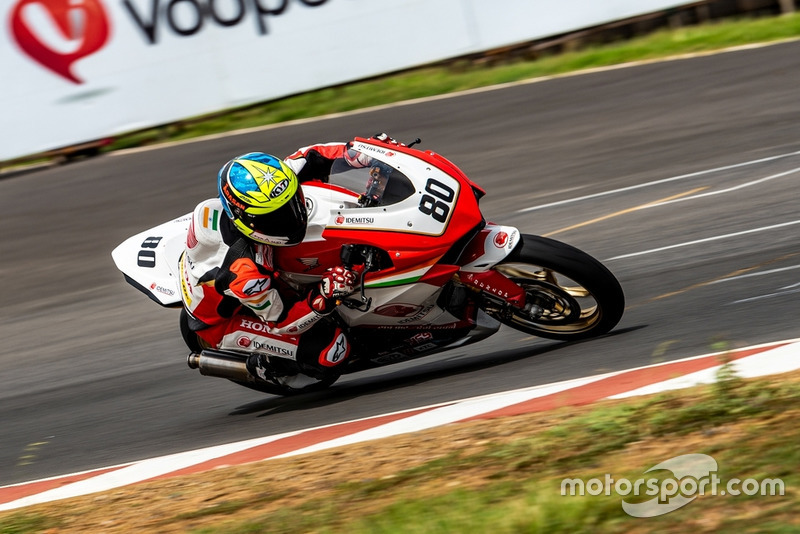 Sethu misses out on points

After finishing 13th in the Asia Production 250cc category on Saturday and bagging his first points of the season, things went less smoothly for Sethu in Race 2 on Sunday, where he was hamstrung by technical problems.

The Honda Racing India rider was unable to make much progress from his lowly grid position of 19th and ended up right on the cusp of points in 16th.

“While I scored in Race 1 with first ever points, the mechanical issue with the bike from the start, plagued me till the end of today’s race,” he explained.

“It was really difficult to push hard today. The race may be over, but the championship is on. And now, after recovery I want to continue to earn points in the next round in Indonesia in October.”

His teammate Anish Shetty, who scored points in Australia earlier this year but crashed out from the race yesterday, also had a disappointing run after a poor start and couldn’t finish any higher than 20th.

“Yesterday was a tough day,” he said. I couldn’t complete the race after the high-side. Unfortunately, a bad start in today’s race couldn’t be recovered.

“But I am happy that I could finish 16th among the best of Asian riders. For me, next weekend will be about extending my lead further in the Pro-stock category of National championship before I go to the next round of ARRC.”