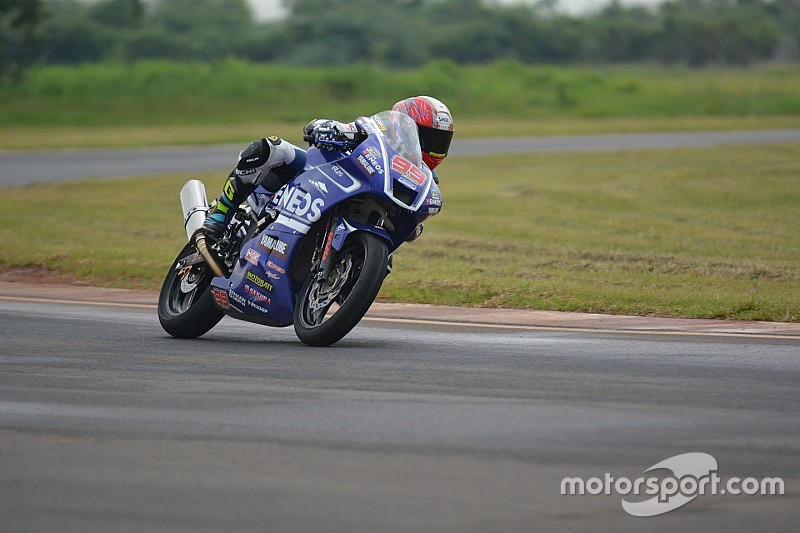 In contrast to Saturday, Sunday saw a damp Madras Motor Race Track that the race of the fifth round of the Asia Road Racing Championship was run on. It began with a drizzle when the Underbone 150cc class was about to begin. However, with just about 10 minutes to go for the 2500cc, race is began to rain more heavily.

Fortunately, the damp track did not see any eventualities and there was good racing on show.

Pole sitter Pratama, who was third in Race 1, kept this lead into the first corner and a decent gap between himself and the rest. Behind him were Koyama, Reynaldo Chrisantho Ratukore and Sarmoon, with all these riders fighting for the second spot.

Koyama, placed second, also managed to get a decent gap between himself and rest of the pack.

Even as Pratama was in a world of his own, Sarmoon had moved up to the third spot and began to challenge Koyama for the second place.

Even behind Pratama, there was not much overtaking barring a few feeble tries. Perhaps, the riders preferred to keep it safe with the wet track.

Pratama kept a lead of more than a second from Koyama, with Yamamoto and Sarapuech in the next two places. As the race was nearing the end, Pratama increased the lead between himself and Koyama to about 1.8 seconds.

From there on, it was not much of a problem for Pratama to clinch the top spot.