Rajiv Sethu and the Honda Racing India team scored yet more points in the Australian round of Asia Road Racing Championship on Sunday.

After securing a career best 10th place result on Saturday, Sethu crossed the line in 12th in Race 2, taking his weekend points tally up to 10.

The Chennai-based rider ran 11th for the first part of the race, only for a highside on lap 6 - caused due to losing traction on the rear tyre -  to drop him behind Mohammed Faerozi Toreqotullah.

Speaking after the race, Sethu said:  “Today there was a lot of juggling at the start itself. After yesterday, I stayed calm and recorded my best ever lap time of 2:09s and maintaining this for 5 laps.

“But the highside in lap 5 pushed me back and it’s disappointing that I couldn’t stay with the rider before me.

“But the positive thing is that I have narrowed my gap and am less than 2 second away from the leader on a consistent basis. Australia round was good for me and entering top 10 bunch.” 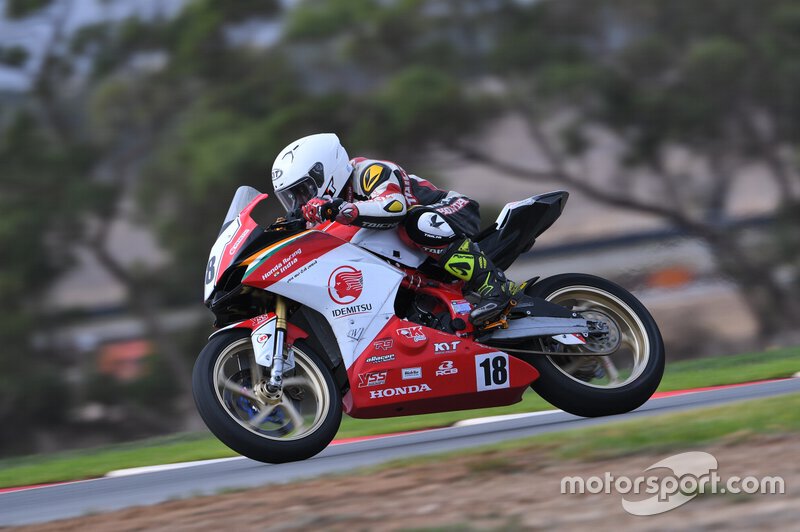 Sethu’s teammate Senthil Kumar was forced to retire from the race after just a single lap due to a technical snag, culminating a difficult weekend for the rookie rider.

Kumar impressed on his ARRC debut in Malaysia by scoring points, but was unable to replicate that feat in Bend Motorsport Park near Adelaide this weekend.

Prior to his Race 2 retirement, he finished 17th in Race 1 on Saturday.

“Compared to my ARRC debut in Malaysia, I have improved my race-craft, be it in my body language, bike handling or even new understanding the technical changes in the windy and wet Australian tarmac,” Kumar said.

“Today I was very calm at the start and had broken into the top 15 but my bike had a sudden technical problem between turn 5 and 6 due to which I had to pre-mature retire from the race.”

The next round of Asia Road Racing Championship will take place at the Chang International Circuit, a track both Sethu and Kumar are familiar with.

“Rajiv’s riding was much stronger today. He paid the brunt of his high side but at the same time, his spectacular recovery proves how far he’s come as a rider contending for top 10.

“Unfortunately, Senthil could not finish his race due to a technical problem. I am confident that with the full support of team and Riding coach by ex-GP rider Mr. Koyama and the entry in top 10 bunch is just the start.

“Thailand round should be a strong one for Honda’s Indian team as both Rajiv and Senthil are familiar with this track.”