Craft-Bamboo claim the double in qualifying at Shanghai 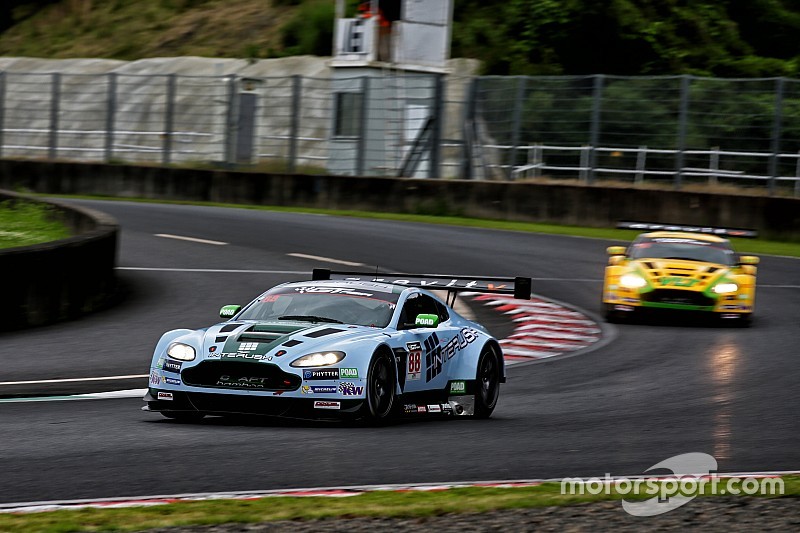 Craft Bamboo Racing emerged victorious in qualifying claiming the top spot in both sessions at the Shanghai International Circuit, China.

Despite a spirited battle during official practice which at one stage saw six cars from four different marques covered by just 35 one hundredths of a second, Craft Bamboo Racing emerged victorious in qualifying claiming the top spot in both sessions, the sixth time they’ve claimed the coveted Motul pole position award in nine rounds..

After a shipping delay forced organisers to cancel unofficial practice, teams were 100% focused on extracting maximum value from the two official 45-minute practice sessions, which at various points looked more like a qualifying session than preparation for the penultimate event of the season.

I drove it like I stole it and ended up putting in a lap faster than the Bentley.

Up to that point there had been nothing separating the leaders, with Craft-Bamboo’s Richard Lyons, new FFF Racing recruit Alvaro Parente, last-minute Clearwater Racing recruit Alessandro Guidi, Bentley’s Duncan Tappy, 2014 Shanghai front-runner Davide Rizzo and Lloyd locked in combat for the top spot.

For Parente, it took just five laps for the McLaren factory star to put the #55 FFF 650S GT3 in the mix, whilst 2014 Sepang race-winner Guidi was also impressive, especially given his last-minute call-up - just two days prior to the event - after nominated driver James Calado was unable to achieve a Visa to enter China in time.

By qualifying the anticipation was high, with just two 15-minute sessions to extract the maximum from their cars, but few were prepared to lay a wager on who would claim pole given how close the field was.

Sadly for Triple FFF, the pace-sitting #55 McLaren was unable to make a start after a technical issue forced them to sit out both sessions, whilst the GTM class Ferrari of Kenneth Lim and James Cai was also unable to record a qualifying time after suffering from a gearbox oil seal leak during practice, both teams though are expecting to be on the grid for Saturday’s opening race.

During opening qualifying it was the experienced Richard Lyons who set the pace in the Interush Aston, his early 1:47.340 enough to take him to the top, but quickly Guidi closed in as the two traded times, the #1 Clearwater Ferrari dropping to a 1:47.167 before Lyons put in one last flyer to take the top spot, in the process dropping the qualifying lap record to a 1:46.985. Guidi held on to P2, with Tonio Liuzzi guiding the #5 FFF Racing Team by ACM McLaren to an impressive third ahead of TP12 Racing’s Carlo Van Dam.

“I just never give up,” Lyons admitted after the opening qualifier. “It was a bit of a strange session, the circuit condition wasn’t so good for the first few laps, but we got pole position for most of the session and I backed off, but then somebody went quicker with about three or four laps to go, and I gave it one more go and pulled off a stunning lap - it was absolutely perfect, the car was so good!”

For qualifying two, all the eyes were on the battle between Adderly Fong in the #8 Absolute Bentley, the impressive Lloyd in the #99 Aston and 2014 front-runner Anthony Liu in the #37 Ferrari, interestingly, the top three teams in the championship.

Lloyd was quick early, but as Fong got his control Michelins up to speed, he pounced late in the session to claim the top spot, his 1:47.333, more than a tenth faster than the young Englishman, but as the Sepang pole-sitter started to prepare for a second shot, a red flag forced him back to pit lane after the Gulf Racing JP Porsche of Takashi Hagino spun to a stop on track.

For a number of teams, they felt they’d achieved the best they could and didn’t venture back onto the circuit for the final three and a half minutes, however Lloyd did, putting together the perfect lap to claim his second pole from two starts.

“It was exciting,” Lloyd said afterwards. “Not the best to start with - I saw in the first session all the cars were struggling to put the times in early so I knew the lap time was going to come late in the session, so I was just trying to piece it together. The time wasn’t quite there, so I backed off for a lap to let the tyres come back to me and the red flag came out. I knew I was P2 and just behind the Bentley by a tenth, so I came back to the pits, but we decided to cue up at the end of the pit lane to give it another shot. To be honest I didn’t think there was going to be another chance, but I drove it like I stole it and ended up putting in a lap faster than the Bentley.”

For the GTM class, Hisashi Kunie kept his championship assault alive taking the Gulf Racing JP team’s second pole for the round, mere hundredths of a second clear of Jerry Wang, with the LKM Porsche claiming third.

Lloyd puts in stunning drive to claim victory in Shanghai