Craft-Bamboo Racing focused on the podium in Thailand 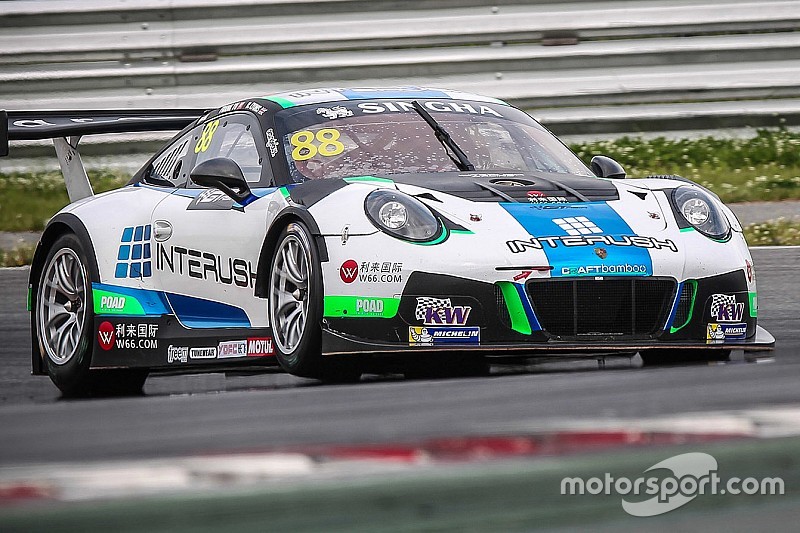 With new driver lineups for the #88 IGOFX and #99 VLT Porsche this weekend, Craft-Bamboo is ready to hit the track and begin preparations for Saturday's qualifying session.

Craft-Bamboo Racing is focused on podium results this weekend in Thailand, with their two GT3s and one GT4 entry prepared to do battle at the Chang International Circuit in Buriram. After a positive start to the season in Malaysia, the team is looking to make further gains on their performance in Thailand. With new driver lineups for the #88 IGOFX and #99 VLT Porsche this weekend, Craft-Bamboo is ready to hit the track and begin preparations for Saturday's qualifying session.

Naiyanobh Bhirombhakdi joins Chris van der Drift in the #88 IGOFX Porsche, while newcomer Devon Modell replaces Peter Li Zhi Cong for this round in the #99 VLT Porsche alongside, Darryl O’Young. The GT4 entry of Frank Yu and Jean-Marc Merlin are looking to continue their string of success as they fight for the sole lead in the GT4 drivers’ championship. They are currently tied for the top spot and are intent on scoring more wins to break away from the competition this weekend.

Local Thai driver, Bhirombhakdi, will return to the Porsche 911 GT3 R for the first time since he competed with Craft-Bamboo in the 2016 GT Asia Series, and he is keen to continue making developments as a driver and with the #88 IGOFX Porsche. Bhirombhakdi knows the Chang International Circuit well and will be getting reacquainted with the Porsche 911 GT3 R by helping to dial in the car’s setup during the early sessions. While his teammate van der Drift is new to the circuit, his years of top level motorsport experience should see the New Zealander on the pace in no time.

Having only last week steered a Porsche 911 GT3 R in the China GT championship, van der Drift is in perfectly equipped to get his Blancpain GT Series Asia challenge underway and will be the perfect partner to complement Bhirombhakdi’s youthful talent. With the Thai driver competing in front of his home crowd and the pair’s wealth of experience behind the wheel of the Porsche 911 GT3 R, the #88 IGOFX Porsche is primed for the podium in Thailand.

In the #99 VLT Porsche, O’Young teams up with new partner, Modell, for Thailand. His regular partner, Peter Li Zhi Cong, has an unavoidable prior commitment and has been forced to miss the second round of the season. The #99 is still in very good hands though, thanks to O’Young’s history of success at the Buriram circuit. The Hong Kong driver took an incredible victory in 2015 that was responsible for netting him the GT Asia Series drivers’ championship title.

Also having raced in Buriram in 2016, this time in the Porsche 911 GT3 R, O’Young is well equipped for this weekend’s challenge and will be able to show his new partner the ropes. Modell will have to get to grips with both the Porsche 911 GT3 R and the Thai circuit, and understands that it will be a steep learning curve, but one that the experienced sprint and endurance driver should have no trouble overcoming.

The #77 Porsche Cayman GT4 Clubsport MR of Yu and Merlin got off to a brilliant start in Sepang and while they are currently tied for first in the drivers’ championship, the pair now needs to build a gap to the rest of the competition with more victories in Thailand. Yu has driven the Buriram circuit on multiple occasions, giving him the advantage over his teammate who has yet to compete there.

The Frenchman will have to make the most of the early practice sessions in the #77 Porsche Cayman GT4 to get acquainted with the track, but thanks to Craft-Bamboo’s vast store of data from previous race weekends at Buriram, Merlin will have everything he needs at his disposal to get the #77 Porsche up to speed. With the performance and consistency that the pair showed in the first round in Sepang, once Merlin has adjusted to the Thai circuit, the #77 pair should be one of the most potent entries in their class and will be a certain contender for victory this weekend.

“I am very excited to welcome back Naiyanobh Bhirombhakdi to the team and I am sure that he will make an excellent pairing alongside Chris van der Drift who is a seasoned pro. I am looking forward to seeing what Devon Modell can do with our regular driver, Darryl O’Young. Thailand is a difficult circuit, particularly with the heat, but we have some improvements lined up for the car this weekend so we can take another step forward. I am excited to see what results we can attain this weekend. The Thai people are always very friendly and this is a favourite round for the team and we can’t wait to get started.”

“After having just driven the GT3R at Beijing over the previous weekend I am really looking forward to getting on track in Buriram. Firstly to drive the car again and work with Craft-Bamboo for the first time, getting to know the guys in the team as well as working with my new team mate. Looking for a good result over the weekend and I’m sure the track will suit our Porsche well so I can’t wait to see how we stack up against the rest.”

“I can’t wait to get back in the car after quite a few months away from it. With Buriram being the home race for me it has a special meaning to perform well for the home crowd. With a couple of talented Thai drivers competing in the series this weekend, I hope to have a competitive showing and score good results for the team and my country."

“In Sepang we showed good potential but we didn't capitalize on the opportunity. We've worked hard since the last race and I have a good feeling we will take a step forward in Thailand. I'm also looking forward to pairing up with Devon, he will have a lot to catch up with being new to the car but we will work together to get him up to speed quickly. I can't wait to get started!”

"I'm very excited and optimistic heading into a weekend that presents many challenges, with the car, team and track all being new to me. Both Darryl and Craft-Bamboo are big names in the Asian GT championships and it's an honour to be racing with them. I'm hoping we can build on their pace from the 1st round and challenge for a couple of podiums over the weekend"

“I am really looking forward to the race in Thailand as I really enjoy the circuit. We are heading into the championship on equal points with the EKS car, so we will try our best to come out of the weekend with the lead. I think the car will really suit the circuit and we will see how the weather turns out. There are storms predicted but you never know what might happen.”

“I can’t wait to get back in the car again this weekend. I will have to work very hard to learn the circuit in the early practice sessions to ensure that I have the confidence and the pace going into race one. We need to get ahead of the number #10 car this weekend, which we are currently tied with on points. With Frank’s experience here, I am sure we will be able to come away with some good results.”