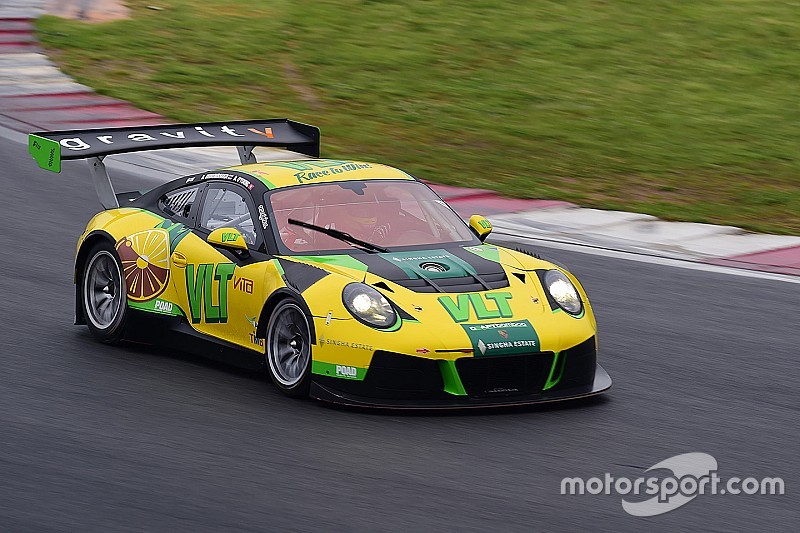 The team is confident that they will be back on form in Buriram, having learnt a great deal this weekend after gaining more crucial seat time.

Craft-Bamboo Racing were taken out of the GT Asia Series lead when an overly ambitious Lamborghini careened into the #88 Interush Porsche on only lap six of the first race of the season. Richard Lyons had made a great start to get into P1 and was running strong until the crash ended their hopes of a top result. Unfortunately, the #88 Porsche was blighted by bad luck again in race two, suffering two separate tyre punctures. The latter puncture forcing them to retire for the second time, which was even more disappointing given their leader matching race pace.

The #91 VLT Porsche debuted with new GT3 driver Naiyanobh Bhirombhakdi who did an excellent job of adapting to the new car and demands of GT3 racing. Partnered with Darryl O’Young, they finished race one in P9 and race two in P8, giving the #91 pair a solid amount of points in which to base their 2016 campaign on. The team is confident that they will be back on form in Buriram, having learnt a great deal this weekend after gaining more crucial seat time.

Richard Lyons was first up in the new Porsche and it didn’t take long for him to find the pace. Lyons clocked a 2:07.025, which would see him start the first race of the season in P4 and give the #88 car a good shot at a top result.

Frank Yu was up next in the second session and he was continuing to improve his times with every lap. By the end of Q2, Frank recorded a 2:10.574 that was good enough to secure P10 on the start grid for race two.

Darryl O’Young was tasked with setting the Q1 time and he lapped the Korean circuit in 2:07.431 to take the seventh starting spot for Saturday’s race.

Naiyanobh Bhirombhakdi would battle the rest of the field in Q2 and the GT3 rookie was able to clock a time of 2:10.466 to just beat out the #88 Interush entry and claim P8 for the start of race two.

Richard Lyons was off to a great start, moving up into P3 by the start of turn one and taking a further two spots to claim the lead by the exit of the first corner. Now in the lead, he was beginning to edge out a gap by lap six until he was hit from behind by the FFF-Racing Lamborghini who lost control while battling with an opponent. The resulting contact forced Lyons off the track and out of the race with a damaged car. Given his pace and that of Frank’s during qualifying, the #88 Interush Porsche was well on its way to a top result but was once again ruined by more careless contact from the competition.

Darryl O’Young made a clean start in the #91 VLT Porsche and began to battle for track position. He managed take a few positions over the coming laps but was struggling to find the right balance. O’Young fought hard and showed great skill in moving up the field. When the pit window opened, O’Young was in P5 and changed over to teammate Naiyanobh Bhirombhakdi who hit the track for the first GT race of his career. Bhirombhakdi was showing signs of continued development but the rookie was still getting used the GT3s dynamics on the Korean circuit. After pushing the car to its limits in the pursuit of quicker lap times, the Thai driver was caught out by a spin but he quickly regrouped and returned to the chase. As the hour long race drew to a close the VLT Porsche crossed the line in P9 to collect some valuable points and give both drivers some crucial seat time.

With the #88 Porsche repaired for race two, Frank got off to another good start and he was able to snatch a few places into turn one where he settled into P6. After a couple of good laps, Frank and one of the Bentleys made contact, causing the #88 Porsche to spin and undo that great start. He got back into the action straight away and set about regaining lost time before pitting in P12. After a faultless driver change Lyons was away but a slow puncture was soon discovered, forcing Lyons to return to the pits to change the tyre.

Once he was back out on track the expert GT driver began setting some brilliant lap times, clearly doing his all to shave off as much lost time as possible. The Irishman was matching the leader’s pace, setting times in the region of 2:08.00 and showing just how competitive the #88 car could be. Lyons was unrelenting in his pursuit and continued to gain on the competition but bad luck was about to strike once more. With only a few laps left of race two; the #88 suffered another puncture that would force Lyons to retire the car due to another incident completely out of their control.

Naiyanobh Bhirombhakdi made a clean rolling start and got straight into fighting with the competition. With more time in the car, Bhirombhakdi was showing greater confidence in his driving style. This was reflected in his pace too, taking back a position after battling with the Audi in the opening stages of his stint. The Thai driver continued to gather speed, setting his best lap of the race just before the opening of the pit window. After the #88 Interush car completed its pit stop, Bhirombhakdi dove in and changed to O’Young who set his sights on moving up the field. The 2015 champion did just that and was able to manoeuvre into P8 towards the end of his stint. O’Young continued to push the #91 Porsche and was closing in P7, separated by only tenths of a second at one point. With the hour long race drawing to a close, there wasn’t enough time for O’Young make his move. As the chequered flag waved, O’Young crossed the line in P8 to take home some more points for their championship campaign.

“The mechanics had to work hard to repair the damage caused by the Lamborghini from race one but they got the job done. I unfortunately had to do the extra stop to change the tyre after my driver change, which cost us further time and the chance of a top 10. Again, bad luck got us on the last lap with a puncture, which put us out once again.”

“Had a pretty good start, gained a couple of positions in turn one and then was sitting comfortably in P6 or P7. In lap two or three, I had contact with one of the Bentleys, which spun me around. The rest of the stint was trying to catch up."

“Race two was much better, I was a lot more confident with all the seat time I have had. It wasn’t the greatest result but I have learnt so much during my first GT3 weekend and I will only continue to improve so I am looking forward to the next race.”

“We improved on yesterday, Naiyanobh drove a good stint and he improved a lot over the weekend. I took over the car around P10 and I had a strong stint, the car has been developing over the weekend. I had a good fight with Alex Yoong but I was unable to overtake him. Overall positive weekend and we will keep pushing to improve.”

“We knew this weekend would be challenging as we haven’t had much time with the car or to prepare, so we fell a bit behind the curve in terms of car performance. I think the car deserves a revised BoP but I am sure there are things that we will be doing to help ourselves. I am very impressed with how our new driver, Naiyanobh Bhirombhakdi, handled his first ever competitive GT3 weekend in a brand new car. The #91 car showed great development throughout the weekend and I believe that we will come back even stronger in Thailand.”