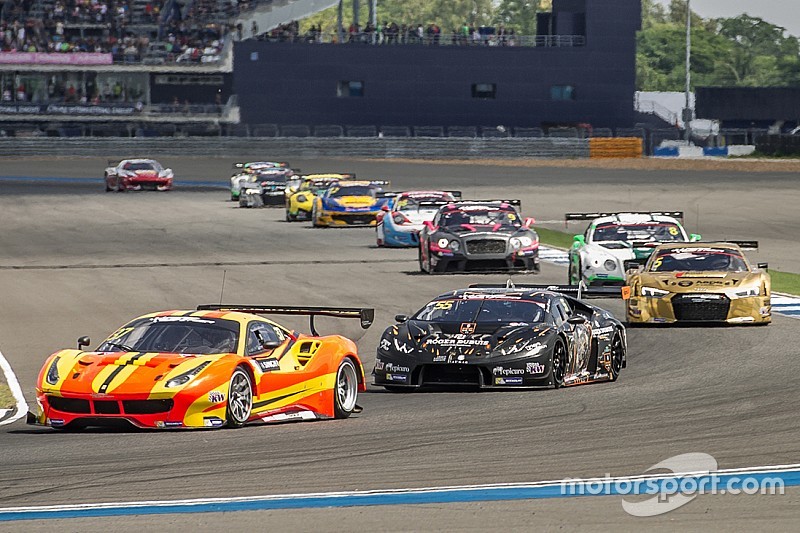 Twelve months ago the GT Asia Series saw two of the most unpredictable races of the season take place at Okayama International Circuit, in the Series’ second visit to the popular Japanese circuit.

In the end it was a weekend of firsts - the first victory in Asia for the new McLaren 650S GT3, and ultimately, the first victory of the thundering Bentley Continental GT3 on Asian soil - it was a memorable weekend and season 2016 promises to continue the trend.

In fact, in just four prior GT Asia Series races at Okayama, there have been only three winners, but only one of them has won twice, Craft-Bamboo Racing’s Frank Yu [2013], and the new Porsche recruit will be looking to continue his winning streak this weekend.

Leading the charge though will be points-leaders Anthony Liu and Davide Rizzo, the BBT Ferrari team have been fast and consistent so far this season, winning last time out in Thailand, and they were podium finishers 12 months ago at Okayama, so know the circuit well.

Bentley will be back with a vengeance, with 2015 rookie winner Adderly Fong coming in hot from a weekend in the USA where the Bentley Team Absolute driver took his US-mount to pole position and dual podiums at Road America on debut, although with local hero Keita Sawa back from his incredible fourth-placed finish at Le Mans two weeks ago, he will have a battle on his hands against his former team-mate.

Keep an eye too on the third car in the Absolute Racing stable, it made the podium twice in Thailand with Vutthikorn Inthrapuvasak joined by former Buriram winner Duncan Tappy subbing for the injured Andrew Palmer. This time around it will be European Bentley star Christer Jöns who will join the young Thai driver in the #9 car, with Jöns expected to keep the Bentley Team Absolute onslaught alive, just as super-sub Andy Soucek did 12-months ago on his way to pole in the #7 entry.

Audi too are expected to challenge the leaders once again, and they will be looking to add to their maiden win in Thailand last time out, with Phoenix Racing Asia’s Marchy Lee and Shaun Thong moving right into title contention after four rounds, hot on the heels of back-to-back opening round winner Jonathan Venter.

Don’t discount the #3 Clearwater Racing Ferrari of Mok Weng Sun and Gianmaria Bruni either, both are fresh from the legendary Le Mans 24 Hours where the Clearwater team recorded an incredible fourth place finish in the hotly contested GTE Pro-Am category. These two have some serious unfinished business with Okayama, after their dramatic retirement in the roll-around lap for the opening race 12-months ago, which saw Bruni parked trackside with flames leaping from the chrome Ferrari 458 Italia, sending the former F1 regular home early.

For Okayama there will also be some ‘new blood’ in the Series, with two of Australia’s fast rising young stars in George Miedecke and recent Australian GT race winner Nathan Morcom entered in an Aston Martin Vantage GT3 out of the Miedecke Stone Motorsport stable, a stable which also includes the 2015 championship winning cars from Craft-Bamboo Racing.

Craft-Bamboo with the all-new Porsche GT3

And speaking of Porsche.. Don’t discount Craft-Bamboo Racing.. They have a strong pedigree at Okayama, having claimed back-to-back wins in 2013 with Frank Yu and Stefan Mucke, they have the knowledge and the experience to put their all-new Porsche GT3-R’s on top of the podium. They also showed good form at the opening round in South Korea ahead of an accident which eliminated Richard Lyons from the race lead, and were quick in race two in Thailand after a tough opening leg. They’re hungry and will be looking to make amends for a testing start to the year.

And then there’s the two Italians in the Raging Bull.. Lamborghini factory juniors Andrea Amici and Edoardo Liberati - the two FFF Racing Team by ACM drivers have been fast since their South Korean debut in the Huracan GT3, but luck hasn’t been on their side, although when they have had a clean run they’ve made the podium - twice - and they could provide an upset this weekend and hand the Chinese-Italian team another Japanese victory.

Who to watch out for

It’s difficult to look past the winners of the opening four rounds of the year, specifically points-leaders Anthony Liu and Davide Rizzo in the BBT Ferrari 488, Marchy Lee and Shaun Thong in the gorgeous gold Audi R8 and back-to-back South Korean winners Keita Sawa and Jonathan Venter, but there are any number of challengers capable of making the podium.

Lamborghini could emerge as the surprise challengers, but discount the #3 Ferrari at your peril - three-time GT Asia Series champion Mok Weng Sun endured an epic lesson in GT racing at Le Mans recently, and his team-mate is one of the best GT drivers in the world, and with no additional compulsory pit stop penalty, they could prove the greatest threat..!

Located in the mountains outside of Mimasaka, Okayama Prefecture, the legendary Japanese circuit is prone to fairly rapid weather changes, something the circuit saw in 2015 with torrential rain during the first two days of the event. Rain is in the area this week, with some suggestions that thunderstorms will also prevail, however the circuit could just as easily be dry.. Teams will just have to adjust to the conditions as they come, although humidity will be high, with ambient temperatures expected in the high 20s.