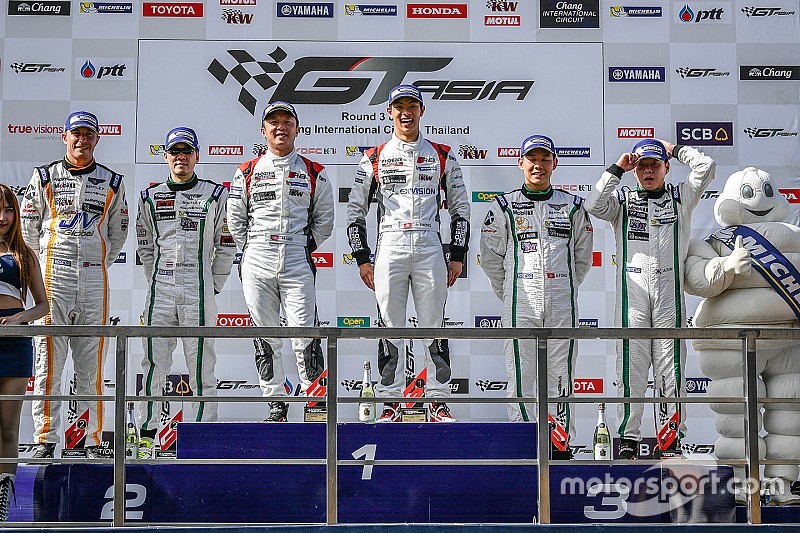 Phoenix Racing Asia’s Marchy Lee turned in one of the best drives of his long career to record the team’s maiden GT Asia Series victory at Buriram, the Hong Kong-based driver, together with rising Audi star Shaun Thong prevailing in the Thailand heat despite some strong competition right from the opening lap.

Carlo Van Dam stole the initial advantage from Thong during an intense qualifying session, the experienced Dutch driver taking the Singha Motorsport Ferrari 458 he shares with local hero Piti Bhirombhakdi to the top spot from Shuan Thong by a mere three one hundredths of a second. Ultimately the top six cars were separated by just half a second.

The second qualifier saw another battle for the top of the timesheets, this time a repeat performance of what we witnessed in South Korea, with Marchy Lee and Anthony Liu going head-to-head separated by just hundredths of a second. In the end it was Liu who claimed the top spot, displacing Lee in the final seconds of the session for pole, with Lamborghini’s Andrea Amici third.

The action started from the opening lap of the first 60-minute race, with a penalty for the FFF Racing Lamborghini, whilst up front Carlo Van Dam held the field at bay. Davide Rizzo was the big mover early as Shaun Thong faded with a brake pressure issue, but the Italian Ferrari driver had a spin whilst battling for second.

With Van Dam pitting from the lead to hand the car to Piti, Duncan Tappy took over the top spot before his stop. Sadly, despite rejoining with a comfortable lead, which he extended with every lap, Piti was forced to endure a drive-through penalty for leaving his pit bay too soon during the compulsory stop.

By that stage Marchy Lee had charged back through the field to catch and overtake the Bentley’s of Vutthikorn and Andrew Kim to claim an emphatic win for the Hong Kong-based team.

What the drivers had to say;

1. Marchy Lee (#5 Phoenix Racing Asia Audi R8 LMS GT3)
“It was extremely hot.. I kept my head down because I knew it was a big gap, but Audi has built a very good race car and we managed the tyre very well and I think that was the key point for this race.”

1. Shaun Thong (#5 Phoenix Racing Asia Audi R8 LMS GT3)
“I’d built up too much heat in the brakes which meant I had to wait two laps until I could get maximum pressure back, and I lost two positions in the process. I was really looking for a much better start, but thanks to Marchy for pushing really hard to take the positions back.”

2. Duncan Tappy (#9 Bentley Team Absolute Bentley Continental GT3)
“For whatever reason we couldn’t quite bring home the win like we did last year, but I think second is a pretty good result, especially as it’s the first time we’ve driven together [with Vutthikorn].”

2. Vutthikon Inthrapuvasak (#9 Bentley Team Absolute Bentley Continental GT3)
“From the beginning I managed to overtake Andrew, but after that I wasn’t happy with my pace, the car felt like it had too much understeer so I had to change my driving style, and my pace started to improve. I thought we’d crossed the line third, because I didn’t know what had happened to Piti.”

3. Adderly Fong (#7 Bentley Team Absolute Bentley Continental GT3)
“I was happier with the start, especially compared to last year [Fong missed a crucial start in 2015], but it was actually quite difficult to pick the actual start point. I kept my line though and managed to hold out the #37 Ferrari. Buriram is such a challenge, especially because it’s so hot here and with the front-engined layout of our car the heat permeates into the cabin of the car.”

3. Andrew Kim (#7 Bentley Team Absolute Bentley Continental GT3)
“Vutti caught me early in the stint, but I thought I’d let him go and try to take the position back later, and when Marchy caught and passed me, I thought I might have a chance to follow him through but I just couldn’t make it stick.”

Teams now turn their focus to the second race at Buriram, again held in the heat of the early afternoon (2:00pm), for another 60-minute battle around the 4.554-kilometre Chang International Circuit.

The GT Asia Series battle continues in the heat of Thailand