Algarve Pro Racing on Pole for the 4 Hours of Zhuhai 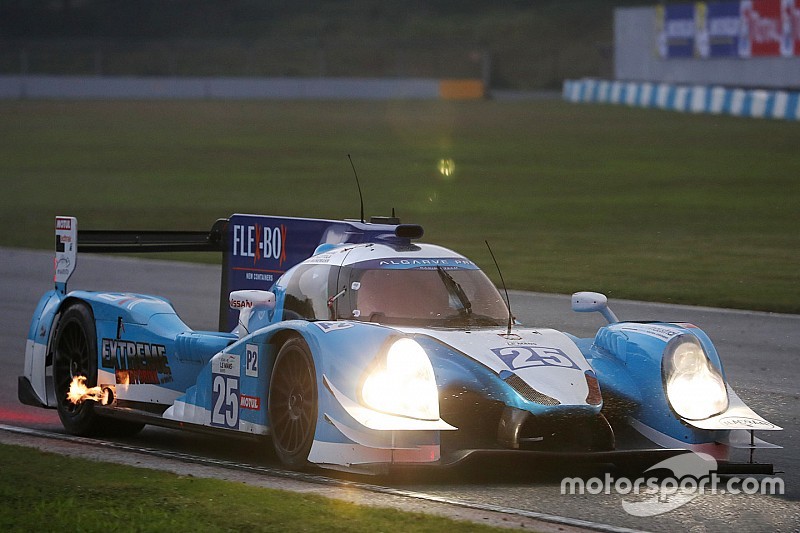 The #25 Algarve Pro Racing Ligier JSP2 Nissan claim the first pole position of the season, after Andrea Pizzitola set a time of 1:38.155.

The 2016-2017 season of the Asian Le Mans Series began today at the Zhuhai International Circuit in China. After two free practice sessions, the qualifying for Sunday’s race took place in the late afternoon on a wet and darkening track, and saw the #25 Algarve Pro Racing Ligier JSP2 Nissan claim the first pole position of the season, after Andrea Pizzitola set a time of 1:38.155. The #99 Wineurasia Ligier JSP3 will be on pole tomorrow for the LMP3 class, and the #38 Spirit of Race Ferrari 488 GT3 will lead the GT pack.

The free practice sessions saw the cars head out for the first official track time of the weekend earlier today. The #35 Jackie Chan DC Racing Oreca 03R Nissan was quickest in Free Practice 1, with a time of 1:30.063. In the second session, the #8 Race Performance Oreca 03R Judd set the best time with a lap of 1:30.223, but it’s worth noting that the best laps of all 4 LMP2 were within a second in FP2. The quickest LMP3 of the two sessions was the #99 Wineurasia Ligier JSP3, with a lap of 1:31.479, and in GT, the #10 FFF Racing by ACM Lamborghini Huracan GT3 was quickest of the class with a lap of 1:33.993.

The changeable conditions throughout the day gave the teams some challenging variation to work with, and the day ended with the qualifying session on a track declared wet.

The LMP2, LMP3 and CN cars went out for the first qualifying session, which saw Andrea Pizzitola take the pole position in the #25 Algarve Pro Racing Ligier JSP2 Nissan with his time of 1:38.155. With 2:43 to go, the session was red-flagged after the #48 PS Racing ADESS 03 and the #7 ARC Bratislava Ginetta LMP3 both got stuck in the gravel beds in turns 8 and 7 respectively.

When the session resumed, all but the #48 headed back out to try and improve their lap times, with Ho-Pin Tung in the #35 Jackie Chan DC Racing Oreca 03R Nissan coming closest to pole position with his time of 1:38.429, giving him the second position on the first row. Andrea Roda in the #24 Algarve Pro Racing Ligier JSP2 Judd was 3rd overall with a time of 1:40.540.

Richard Bradley was quickest of the 9 LMP3 cars with his time of 1:41.346 in the #99 Wineurasia Ligier JSP3. He will be closely followed by two Ginetta LMP3 at the start tomorrow: Weiron Tan went second quickest in the #69 Aylezo Ecotint Racing 2nd with his time of 1:41.582, and the #67 PRT Racing was 3rd quickest in the LMP3 category thanks to Charlie Robertson’s lap of 1:41.745.

Having had a tough start to the weekend with car troubles, Akihiro Asai took the #68 PS Racing Ligier JS53, sole CN entry, around the track in a time of 1:48.137.

In the GT class, the Ferraris are doing very well, having claimed the top three times in the second qualifying session. The #38 Spirit of Race Ferrari 488 GT3 will be starting from class pole, thanks to Marco Cioci’s lap time of 1:42.152. Mere hundredths behind him was Alessandro Pier Guidi in the #37 Team BBT Ferrari 488 GT3, with his fastest lap of 1:42.274. Third in the GT Class was Matt Griffin in the #61 Clearwater Racing Ferrari 488 GT3 with his time of 1:42.337.

#25 Algarve Pro Racing Ligier JSP2 Nissan – Andrea Pizzitola: “It’s a very nice feeling It’s the first race of the season and it’s always good to start like that. But a 4-hour race is a long race, so we’ll have to do a good job in the race as well. I’m happy with the result for the team.”

#99 Wineurasia Ligier JSP3 - Richard Bradley: “It went well in the testing yesterday, and this morning went very well until about halfway through where we had a small incident. We managed to get the car repaired just in time for the end of FP2 and we went out and did a lap, and it worked. I was a little worried about qualifying, as I’ve only driven this car for the first time yesterday, and to go out in the wet was going to be different, but I loved it. It was awesome, the car was just confidence inspiring and the result came through. I’m really happy. Big thanks to the team, it’s all been awesome so far.”

#68 PS Racing Ligier JS53 – Akihiro Asai: “I feel a little awkward as I’m the only one in my class. We’ve been having a lot of problems yesterday and today, but we’re getting there.”

#38 Spirit of Race Ferrari 488 GT3 – Marco Cioci: “I feel lighter than before. Starting qualifying in these conditions is not easy. It was a tough qualifying. Everything is working fine and I have a really good feeling about the race.”