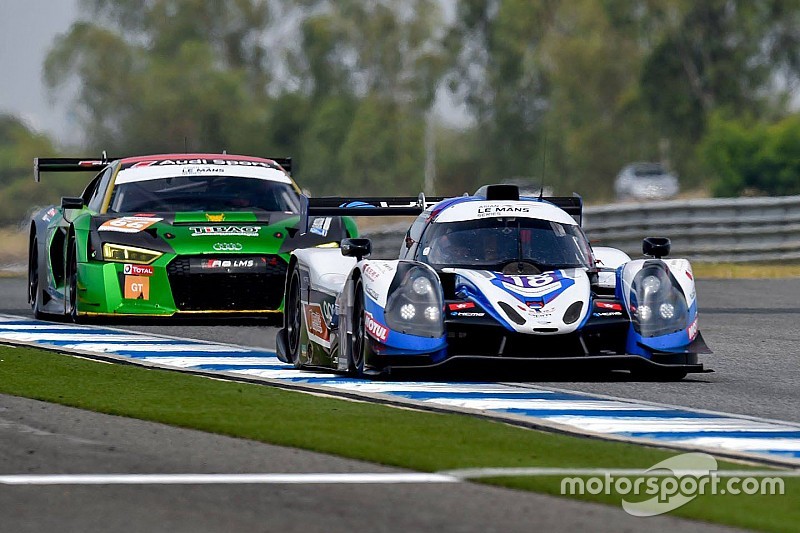 In their debut in the Asian Le Mans Series, the all-Malaysian line up in the #7 Jackie Chan DC Racing x JOTA Sport Oreca 05 Nissan has claimed a hard-fought victory in 6 Hours of Buriram.

Round 3 saw Jazeman Jaafar, Weiron Tan and Afiq Ikhwan Yazid debut in the Series with the support of the Sepang International Circuit. They were pushed hard throughout the whole race by their teammates in the #8 Oreca, before claiming the first ever all-Malaysian victory in the Asian Le Mans Series.

After just 0.001 separated the top two in qualifying the stage was set for an epic fight for the GT Class victory and the race delivered. There was a three-way battle between the Audi Sport Customer Racing Asia by TSRT Audi R8 LMS, and the Ferrari 488 GT3 and BMW M6 GT3 from FIST Team AAI. Accident damaged curtailed the Ferrari’s race, leaving the Audi and the BMW to continue trading places for much of the race, with the BMW coming out on top.

This is the third round of the 2017/18 Asian Le Mans Series was held on Children’s Day in Thailand, and the track was full of family’s keen to check out the excitement of the 6 Hours of Buriram.

An audience of close to 20,000 filled the grandstands, with approximately 200,000 family members filling the circuit precinct to celebrate Children's Day. They were not disappointed by the on track action, with battles occurring up and down the field throughout the whole 6 hours.

As this race is a 6 Hour race, two hours longer than the standard Asian Le Mans Series race, the teams were permitted to use additional Michelin tyres – one extra set for prototype entries and two extra sets for the GT entries to allow for the extra two hours racing.

The race got off to a strong start for the pair of Jackie Chan DC Racing X JOTA Sport Oreca 05 Nissans with Stephane Richelmi in the #8 leading the way ahead of his Malaysian stablemate, Jazeman Jaafar in the #7. Behind them, the #37 BBT Ligier JS P2 was handed a 5 second penalty for a jump start – the time added to their first pit stop.

In LMP3 it was pole sitter, the #18 KCMG Motorsport Ligier JS P3 with Louis Prette at the wheel that started to pull away. Behind Louis, LMP3 reigning Champion, Nigel Moore was fighting his way through the grid and had caught him.

In GT, just as in qualifying, there was an intense battle between the pole sitting #90 FIST Team AAI Ferrari 488 GT3 with Ollie Millroy behind the wheel, and the #66 Audi Sport Customer Racing Asia by TSRT of Massimiliano Wiser. Early on it was the Audi holding the lead of under a second.

The #91 FIST Team AAI BMW M6 GT3 was holding third place with the team choosing to run their Bronze driver first, while the other cars had chosen to run their more experienced drivers.

After 45 minutes the first pit stops commenced. Unfortunately, when Jaafar exited the pit lane he ran over a traffic cone. It got caught in the bodywork of the car, causing the engine and brake temperatures to increase so the team called him in and removed it.

He was not the only one to have an issue after the first stop, Konstantins Calko in the #4 ARC Bratislava #4 Ligier JS P2.

In the closing moments of the opening hour, Moore was right on the tail of Prette who was leading the LMP3 class. Prette pitted and handed the lead to Moore.

Meanwhile in GT, the battle between the Audi and the Ferrari continued with the pair swapping places. It was the Audi that held the lead at the end of the first hour.

At the start of the hour, there was drama as the Ferrari made contact with an LMP3 in traffic which caused a puncture in the Ferrari and resulted in a very slow lap back into the pits.

Race control called for a Full Course Yellow (FCY) period as a result of debris on the track and the Audi used this as an opportunity to pit for their first stop.

Trouble then hit the #65, with it stopping on the apex of T12 – but was able to re-join the circuit. After another spin, they were then handed a drive through penalty for speeding in the pit lane.

With Chaz Mostert in the BMW, the team set about closing the gap that the leading Audi was able to pull out due to pitting under the FYC.

In an otherwise quiet run for the #37 BBT Ligier JS P2 running in 3rd, they were handed another 10 second penalty, that was added to their next pit stop due to an earlier pit stop infringement.

In the LMP3 class an extra stop from the lead car, the #18, saw it drop back, and the #6 Jackie Chan DC Racing x JOTA Sport Ligier JSP3 with Guy Cosmo at the wheel, was able to capitalise and took the class lead. With the #65 still suffering from their own problems, Cosmo held a comfortable lead in Class. However, behind him the #11 Taiwan Beer GH Motorsport Ligier JS P3 of Ye Hong Li was on a charge – closing in on and passing Neric Wei in the KCMG Ligier JS P3. He then set his sights on Cosmo as hour 2 ended.

Out in front, Harrison Newey was putting in some solid lap times to hold the lead for the #8 over their sister car, the #7.

In front of the GT class it was the #66 Audi Sport Customer Racing Asia by TSRT that held a comfortable lead, although the Team AAI BMW was closing the gap.

The problems for the #65 Viper Niza team continued – with an extended visit to the garage.

Half way through the third hour, the Bronze Cup leaders, the #25 Algarve Pro Racing Ligier JS P2 Nissan being driven by John Graham pits with a puncture.

As the end of the 3rd hour approached, Japanese driver, Ye Hong Li in the #11 Taiwan Beer GH Motorsport Ligier JS P3 caught and passed the #6 to take the lead in the LMP3 class.

In GT, Chaz Mostert closed the gap between his BMW and the leading Audi, before passing him just as the 3rd hour ticked over and the second half of the race began.

Once he was in front of the Audi, Mostert began to pull away, extending the BMW’s lead in the GT Class.

After a solid two-hour stint, Mostert handed the car back to Junsan Chen in the lead of the GT class.

After having earlier had problems, the GT Cup entry from Team NZ was back on track and running trouble free with Graeme Dowsett behind the wheel.

In LMP3, with Josh Burdon getting into the KCMG it began to fly, taking the lead in the class before coming in and handing the car to his team mate Louis Prette.

Behind them, the #6 Jackie Chan DC Racing x JOTA Sport Ligier JS P3 was having further problems, being shown a black and orange flag, requiring them to come into the pits to replace a mirror.

The #8 was also issued a drive through penalty in this hour for a pit entry violation earlier in the race. This penalty gave the #7 the advantage, taking a 30 second lead into the 5th hour. Behind them, Derani in the #37 BBT Ligier was a man on a mission chasing down the leading pair.

As the 4th hour came to a close, the battle between the top two LMP3 runners was intense between Hanss Lin in the #11 and Neric Wei in the #18. Further back, the Viper Niza car returned to the track after spending nearly 40 laps in the garage.

In GT, Junsan Chen brought the BMW back into the pits and handed it over to the team’s very quick Finnish driver, Jesse Krohn just as the hour finished.

Out in front, the two Oreca’s were locked in a very tight battle – with absolutely nothing between them. BBT were running comfortably in 3rd, and ARC Bratislava were 4th.

While Jackie Chan DC Racing x JOTA Sport were running in front of the LMP2 class, in LMP3, their sister Ligier JS P3 was struggling, coming into the pits and pulling the car into the garage.

In front KCMG was pulling out a solid lead from the Taiwan Beer GH Motorsport entry.

On a different pit stop strategy, the Audi was in the front for the start of the hour, however the BMW took the lead back when it pitted with approximately 1.5 hours to go in the race.

The second FCY was called when the Algarve Pro Racing car with Ate Dirk De Jong behind the wheel went off at T7.

Both the #7 and #8 used this as an opportunity to pit while the field was going slowly. BBT also stopped, with Derani getting back into the Ligier.

The Jackie Chan DC Racing x JOTA Sport confirmed that the #8 had been fighting a possible gearbox problem, specifically a gear shift issue, and the #6 had a power steering problem that they hoped they had rectified in their lengthy stop.

The final hour saw a hard charging Derani chasing the ailing #8 Jackie Chan DC Racing x JOTA Sport. Unfortunately, he just did not have enough to close the gap. He was still able to finish the race in a comfortable 3rd place.

In LMP3 the #18 KCMG, and in GT the #91 were both able to consolidate their advantages in the final hour. Both ultimately came home with comfortable leads – in stark contrast to the intense battles they both fought during the race.

Team NZ were able to overcome the gremlins in the Porsche to finish the race and claim the GT Cup trophy.