The Atlantic series has undergone official name changes over the years before it ceased operations in March of 2010. At that time, it appeared the series would not return but today, Formula Race Promotions managing director, Michael Rand, was pleased to announce the return of a series that was popular not only with up and coming young drivers but also fans in both the United States and Canada.

Canadian Bill Brack was the first Formula Atlantic champion in 1974 and 35 years later, American John Edwards was the title winner in 2009. Many of the world’s top drivers competed in the Atlantic series including Gilles Villeneuve, Tom Gloy, Michael Andretti, Calvin Fish, and Johnny O'Connell in the late ‘70s to the late ‘80s and in the later years, the fans saw Brian Till, Patrick Carpentier, Buddy Rice, Jon Fogarty, AJ Allmendinger, Simon Pagenaud and Raphael Matos. 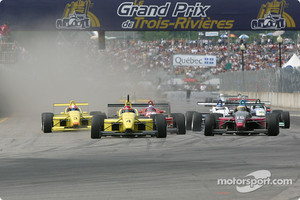 Now a new era is beginning with the Sports Car Club of America’s Pro Racing department as the sanctioning body for the Atlantic Championship Series’ revival by Formula Race Promotions. The first year, 2012, will run in conjunction with the F2000 and F1600 Formula F Championship Series, also sanctioned by the SCCA. There will be six races over three events so double the fun for the drivers and the fans.

The first race will be held at Road Atlanta on May 10-12 followed in June with an event on July 1st weekend at New Jersey Motorsports Park. The first season of the return of pro Atlantic racing will end in August at Summit Point.

We are responding to numerous requests from inside the Atlantic community and are pleased to offer this spectacular class of race cars a dedicated series.

“We are responding to numerous requests from inside the Atlantic community and are pleased to offer this spectacular class of race cars a dedicated series. While the car counts are not currently in the F2000 or F1600 league, we feel there are sufficient enthusiastic teams and drivers that, if offered a compelling program, will respond with their entry and participation,” said Rand.

No doubt the Atlantic series fans will watch to see if the idea takes off as will the media. Younger drivers who have been searching for a way to climb the open-wheel ladder will no doubt will also keep a keen eye on the return of a pro Atlantic series as their future aims are a high priority. Of course, the idea of the revival will depend on the cost factor for teams but it at least is a viable start.