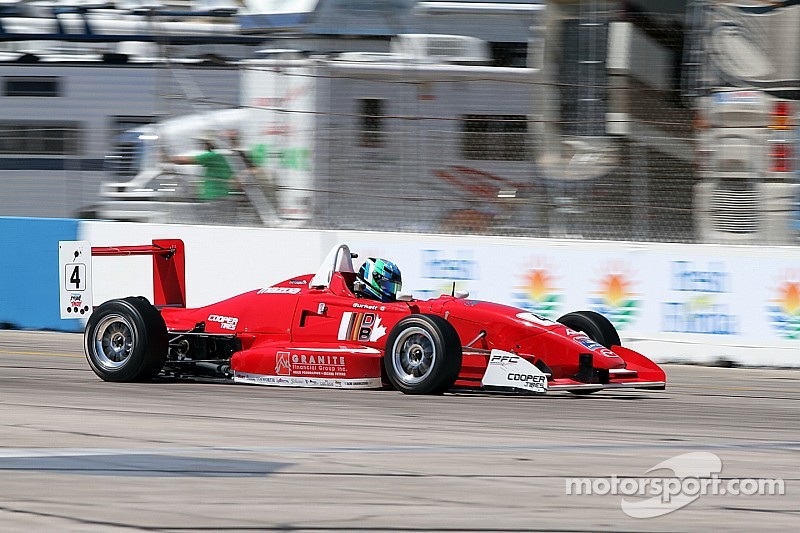 Also wraps up the championship.

The Atlantic Championship Series concluded its 2014 season with the finale race on Sunday at Thompson Speedway in Connecticut. Series champion Daniel Burkett took the final win of the season, making it his eighth Atlantic win. Ethan Ringel of COMPREP finished in second with Keith Grant of Polestar finishing third, after a tight fight for the position with Conner Kearby.

Burkett (in photo from a previous outing), driving for K-Hill Motorsports and backed by Champion Spark Plugs and Roam Mobility, started the race in front and stretched out his lead quickly. There was a full course caution that caused a restart in the middle race, which proved to be no challenge for the nineteen year old, who immediately pulled away from the field.

"I've driven ovals and just about every track in America but the tight twisting Thompson Speedway has been hardest one I have done. It totally depleted my energy and I couldn't wait to see the white flag. I am happy to bring the K-Hill entry home in first,” said Burkett after jumping off of his car with two number one hands in the air.

Ringel was able to maintain his starting position throughout the race and the restart, bringing the COMPREP #49 in at second for the last race of the season. That finish was his second podium of the weekend following his win from Saturday’s race. "It was a long race, I thought I had a gap back to Keith Grant but a lapped car held me up and Keith kept me on my toes. I'm happy to finish the year with a podium,” Ringel said before stepping up to get his trophy.

Grant was also able to maintain his third place starting position throughout the race. However, Grant faced a hard assault from Kearby, who had made it up to second in turn one but dropped backed to sixth after going off in the gravel. "I was fighting the setup all weekend but Polestar got it dead on for the final race. Conner kept the pressure on me and wore me out,” said Grant.

The champion of the Atlantic season was crowned after Saturday’s race at Thompson Speedway, however second and third were still under contention. After Sunday’s season closing race the remainder of the championship titles were decided. Jimmy Simpson, who was unable to attend the weekend due to the start of his fall semester at Purdue University, locked in second place in the Atlantic Championship Series.

Third had the most possible outcomes, but in the end the third place title went to Keith Grant. Grant had to work hard in the last race to maintain his points position and clinch third in the Championship. “I cannot wait to come back next year and beat all these young kids”, said Grant after being handed his Championship trophy. Tyler Hunter of Swan Racing, who was also absent this weekend, won the Atlantic Challenge for the 2014 season.

How Herbert drove “beyond the pain threshold” on F1 debut