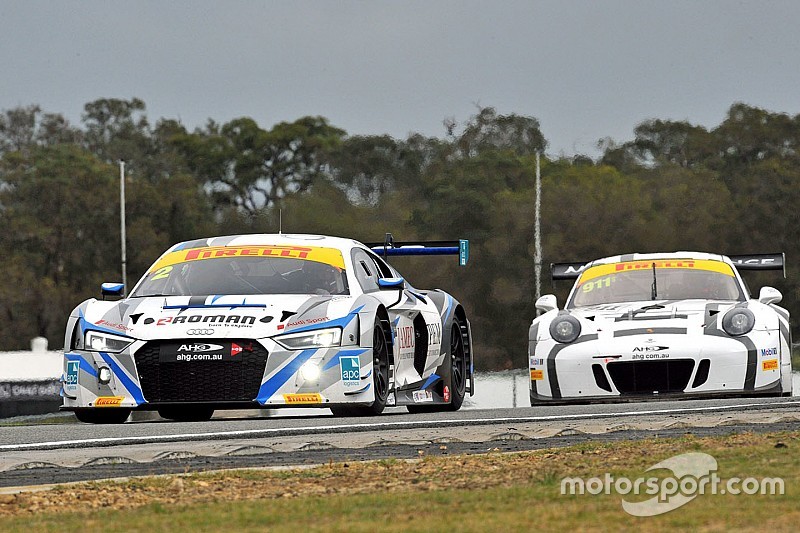 While it was the #2 JAMEC PEM Racing Audi that ultimately took victory, it seemed for much of the first stint that it would the team’s #1 entry that would would be the car to beat.

With import Marco Bonanomi behind the wheel, the #1 Audi charged to a lead of over five seconds as the first quarter of the race went by, leaving Barton Mawer and Craig Baird scrapping over second.

But a Safety Car 18 minutes in, right as the track went from being greasy to completely dry, changed the race. Bonanomi elected to pit outside of the pit window to switch to slicks, dropping into the middle of the pack while Baird took over at the front.

At the mid-way point of the race, things changed again. As the pit-stops shook out, and the compulsory time penalties were applied, Mclaughlan emerged in front, ahead of Tony Quinn and Tony Walls.

Baird’s co-driver Scott Taylor, meanwhile, was back in the pack, right behind Bonanomi’s co-driver Geoff Emery.

With mostly amateur drivers in the cars, McLaughlan’s biggest threats looked to be Marcus Marshall (Audi) and Dean Canto (Lamborghini) as the second stint started to play out.

But with both Marshall and Canto having spins in the final stint, McLaughlan was free to take a comfortable 4.8s victory – despite an unwanted second Safety Car making it a 12-minute sprint to the end.

Solo driver Nathan Morcom finished second, holding off a hard-charging Marshall, the pair going through the final corner of the race side-by-side.

Canto wound up back in ninth, while the Taylor/Baird car slipped all the way down to 11th.