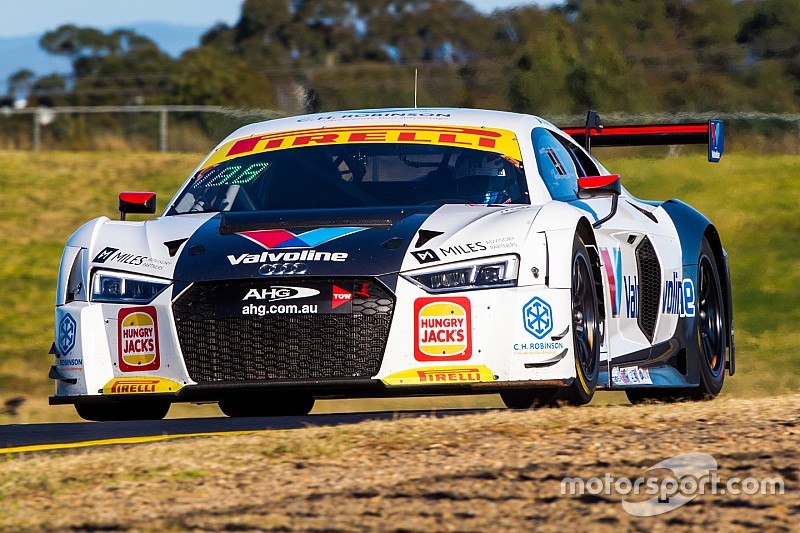 The #75 Audi pair, who won the opening AEC round at Phillip Island back in May, stretched their points lead with an impressive win from today’s 501-kilometre race at SMP.

The crew opted to start the race with amateur driver Miles in the Melbourne Performance Centre-run Audi, before Carrera Cup star Evans took over with 70 laps to run, the maximum any one driver could complete.

With the two compulsory stops out of the way Evans needed to chase down Geoff Emery in the #74 Audi, which had built a big lead thanks to Kelvin van der Linde’s efforts over the first two stints. Evans came from 26 seconds down on Lap 90 to cruise into the lead on Lap 109.

The final 20 laps weren’t completely straightforward for the leaders, though; the #911 Porsche crew had pulled a similar trick, Liam Talbot completing the first stint before handing over to John Martin to double stint to the flag. Martin did his best to run down Evans in the same way Evans had run down Emery, but fell 3.2s short.

Emery came home third after what was an action-packed race. Starting the race second, Emery found himself facing the wrong way on the first lap after clashing with Talbot in the pole-sitting Porsche. The team opted to pit early and throw van der Linde in the car, the South African using a Safety Car called to clear up Scott Taylor’s crashed Mercedes to catch up to the pack, before he stormed his way into the lead within five laps of the race going green.

Van der Linde managed to build the lead to over 30s before handing over to Emery for the final 59 laps of the race.

Dan Gaunt and Dylan O’Keefe came home fourth, inheriting the position when the Max Twigg/Tony D’Alberto Mercedes was excluded for not making both of its compulsory stops inside the pit window.

Highlands to drop Australian GT round