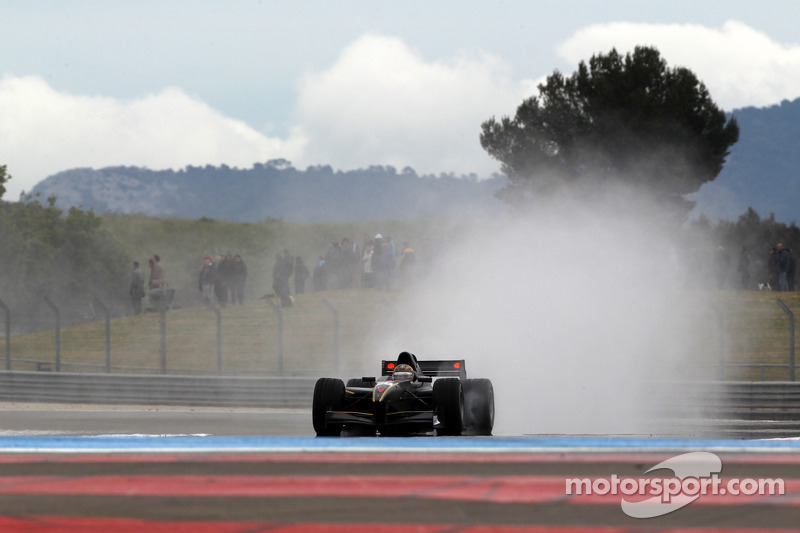 The race was held in pouring rain and the drivers used the Kumho wet weather tires for the first time this year.

It’s been a weekend full of first-time experiences at Le Castellet for the second round of the 2014 Auto GP. After Tamas Pal Kiss (Zele Racing) recorded his first series win yesterday, Kevin Giovesi cruised to victory today for Eurotech topping the Hungarian, who made the most out of the weekend in France. The race was held in pouring rain and the drivers used the Kumho wet weather tires for the first time this year. The final spot on the podium was secured by Euronova’s Kimiya Sato. The Japanese retained the lead in standings despite a contact with Pal Kiss that almost jeopardized his run during the first lap causing small front wing damage.

Race 1’s second-placed driver Markus Pommer ended up in fourth for Super Nova. The German drove a recovery race after being forced to start from Row 4 due to the reverse grid format for Race 2. He edged Super Nova team-mate Michela Cerruti, who had led the pack in the opening stages. Virtuosi UK drivers San Dejonghe and Andrea Roda didn’t end up too far away while Yoshitaka Kuroda (Zele Racing), Michele La Rosa (MLR71 by Euronova) and Giuseppe Cipriani (Ibiza Racing Team) rounded out the top-10. The latter was penalized with a drive-through for having crossed the white line exiting the pits. Eurotech’s youngster Loris Spinelli also suffered from some bad luck as he stopped at the end of the formation lap for a mechanical issue.

The next challenge for the Auto GP teams and drivers will be at the Hungaroring in two weeks. On the 1st of May, six Auto GP cars will be starring in a parade in central Budapest together with the WTCC cars and a Formula 1 brought by Red Bull for a promotional event.