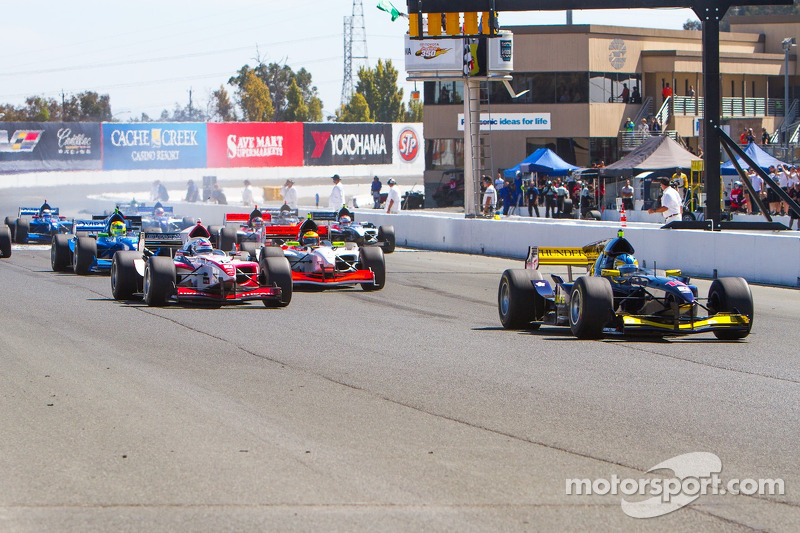 The Auto GP is ready to be back in Italy with two high-profile events. The series will run at Monza this weekend before moving to Imola by the end of June. The Italian fans will finally be able to witness the Auto GP action and support their favorite drivers. Many Italians are currently enjoying seasons in the Coloni-promoted championship and 10 of them took the wheel of the 550-hp Zytek-powered Lolas in the first three rounds: Kevin Giovesi, Andrea Roda, Michele La Rosa, Michela Cerruti, Giuseppe Cipriani, Vittorio Ghirelli, Loris Spinelli, Francesco Dracone, Sergio Campana and Niccolò Schirò.

Some of them will be at their home round at Monza, although it’s Japanese Kimiya Sato who sits at the top of the standings, as he scored three wins out of six races and ended up onto the podium in all of them. He has now 114 points while his closest rival, Zele Racing’s Tamas Pal Kiss, stands with 75 points.

The Hungarian, who scored his maiden Auto GP win at Le Castellet, leapfrogged Markus Pommer as the Super Nova driver failed to make it to the podium in Hungary. In must be noted though that Sato will have to miss the Zeltweg round due to a date clash with the GP2 Series at Hockenheim. Sharing fourth place in standings are two Italians, Kevin Giovesi and Andrea Roda. The first, driving for Eurotech, cruised to the pole twice at Marrakech and Le Castellet but faced some tough luck in the races except for his Race 2 win in France.

Roda also suffered some tough luck, as he saw second place slip away from here during the last lap of Race 1 at Monza. Finally, he scored his maiden podium finish at the Hungaroring, getting a well-deserved reward for his effort in the series. Nine drivers climbed on the podium in six races. Among them, Michele La Rosa and Giuseppe Cipriani, who put together a great run at Marrakech.

La Rosa, who is relying on Euronova to support his MLR71 team, took second place, while Cipriani took third for Ibiza Racing Team. After setting a new track record in preseason testing, Sam Dejonghe also got on the podium last time around at Budapest for Virtuosi UK completing the job done by team-mate Roda, and the same result was achieved by 2013 Champion Vittorio Ghirelli, at his series return. Running in the top-10 in standings, Michela Cerruti missed the joy of the top-3 due to bad luck. At Marrakech, she was blocked by the safety car, while at Budapest she faced even more tough breaks. While fighting in 5th, she was blocked in the pits by her team-mate, who went for his pit-stop one lap too early. She’s now even more determined to rebound in her two home races.

Yoshitaka Kuroda must be mentioned too as well as Eurotech’s Loris Spinelli. The Japanese, who raced for Zele Racing so far, will be back at Euronova for Monza. The Italian is constantly improving as he continues his maiden open-wheel season on some extremely tough cars.

“I live half an hour away from Monza so it’s definitely my home race. I will try to rebound after the tough breaks suffered in Hungary. I’m the only driver with two poles on my toll this season, and that shows that we’re ok in terms of pure speed. We have to try and be equally fast on Race Day. I never raced at Monza on such a powerful car, although I won there in Formula Lista, Formula 3 Italia and also scored a podium in the F.3 Open. For the second part of the championship, I’ll be focusing on the points standings, trying to recover the points lost along the way. Recently we did a shakedown at Adria and everything should work correctly. Soon I should also be relying on an Engineer like Gabriele Tredozi, who worked for years in Formula 1”.


Andrea, a 24-year-old driver from Como is at his second Auto GP season, he scored a podium finish and is sitting in 5th place in standings. He previously raced in F.Ford, F. Renault Italia and Eurocup, Italian Euro Series F.3.

“I’m really looking forward to the round at Monza after having scored a third and a fifth place at Budapest. This of course is an additional motivation for me and the team as we’re aware of our potential. Monza is one of my favorite tracks and it’s also my home race since I’m from Como. Last weekend I also made my Monte Carlo debut and once you tame the challenge of a street track you feel you have grown up as a driver. Obviously the podium is my goal, and maybe improving the position scored at the Hungaroring. In 2013 I scored a great fourth place in qualifying at my series debut but a rook”.


Born in Rome but living in Milan, “Miki” is 27. She is one of the quickest female racers in open-wheelers but she also perform with tin-tops as she proved in Superstars and GT3.

“Monza is my home race and an event I’m really attached to. I want to do well there to provide a good reward for all the friends and fans that will come for a visit. I also have a special relationship with the circuit’s stewards and personnel, they love me and I love them so it would be great to get a good result there. I won my maiden race in 2011 and every time I hope to get the same feeling. The Auto GP will be the fastest car around the track and it’s gonna be funny. The engine has a lot of push and that’s perfect for the long straights of Monza. At Budapest I probably got my worst results in my Auto GP career so I want to reverse my fortunes as soon as possible”.


A 18-year-old from Pescara, Loris is the youngest Auto GP driver. He has moved up directly from go-kart racing, where he won the 2011 KF2 World Championship. After a F.Abarth race, he switched to the 550-horsepower Auto GP car, showing impressive improvement.

I keep climbing my learning curve in Auto GP race by race. I made my debut at Marrakech, a difficult track to try a 550-hp car for the first time. I don’t have any previous experience. I’m coming straight from go-karts and I’m quickly adapting to a completely new world. At Le Castellet and Budapest, two “normal” tracks, I had the chance to make some steady progress. Unfortunately, in Hungary we had some set-up problems and I don’t know what to expect at Monza. I don’t know the track and I never took a lap ther. A few days ago I turned some laps on the simulator, but everything will be new for me there. I’m not scared about the speed, but I’ll have to find the right braking points to push in qualifying. I had a small accident in the last few weeks and got a costal trauma but it shouldn’t be a problem for the weekend.