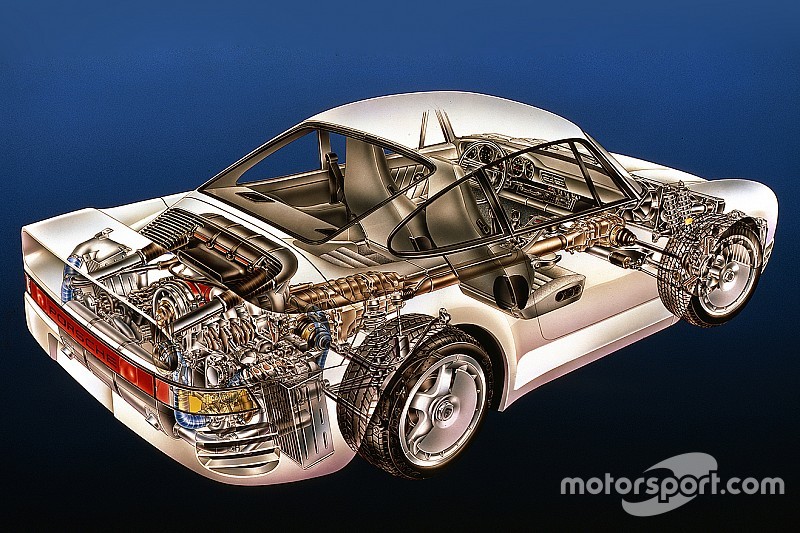 Motor1.com’s Dave Pankew explains why the Porsche 959 can be considered as the grandfather of the modern-day all-wheel-drive supercar.

Conceived in 1981, Porsche’s 959 was literally decades ahead of its time. Debuting in 1985, the Porsche 959 was essentially a 911 shell with a ridiculous amount of tech stuffed inside in order to meet homologation rules for Porsche to go racing.

While most car nuts will not need the history lesson, the 959 came out of the gates with a vengeance by winning the Paris Dakar Rally in 1986 to make a statement. While Group B rally cars produced some of the most obscure and exhilarating race cars of all, the class was soon disbanded after a sequence of high-profile deaths of both drivers and spectators. 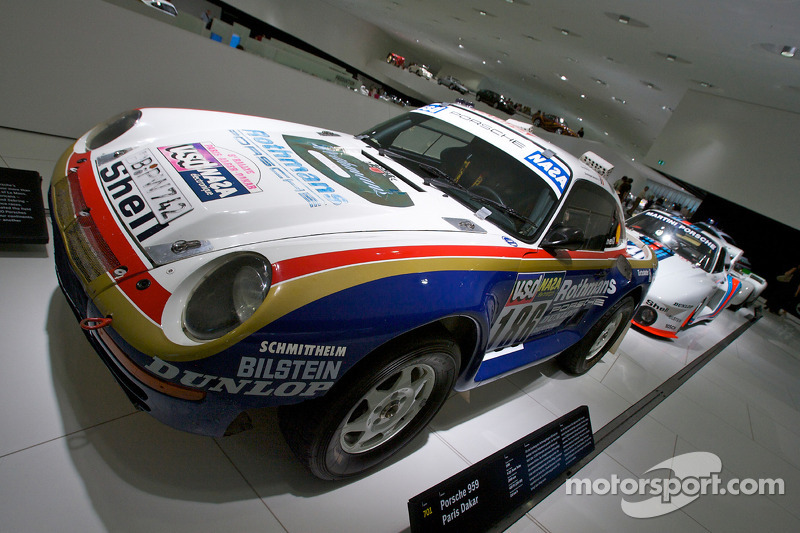 However, Porsche 959’s innovation went on to serve the Porsche 961, which won the GTX class at the 24 Hours of Le Mans at its first attempt in 1986. It finished seventh overall in the hands of Rene Metge and Claude Ballot-Lena, although a fire would ruin its return a year later. 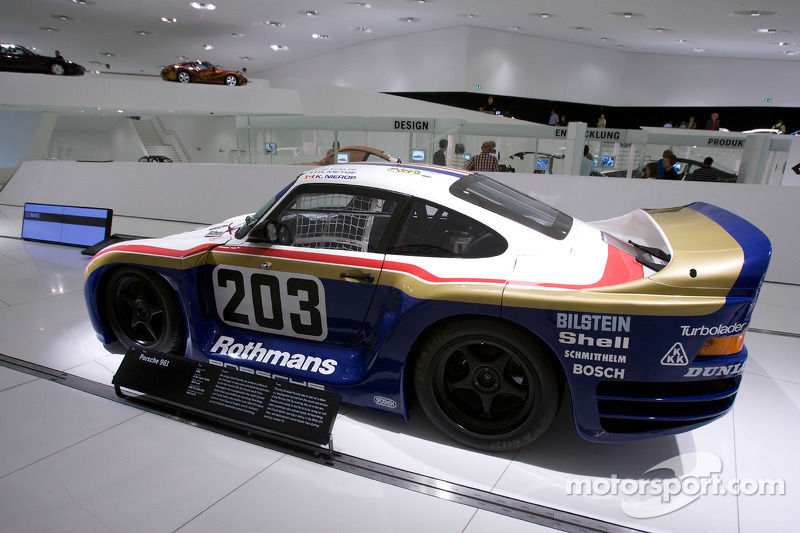 The real fascinating part of the fabled project was the 300 or so Porsche 959 street cars that were produced, which all became instant classics.

While many automakers of the day were struggling to find their footing post-malaise era. Porsche was dreaming up a variety of innovations in their skunkworks. The plan was to build the über-911, one that would not only smash records but assert itself as the one to follow, even 30 years down the road. 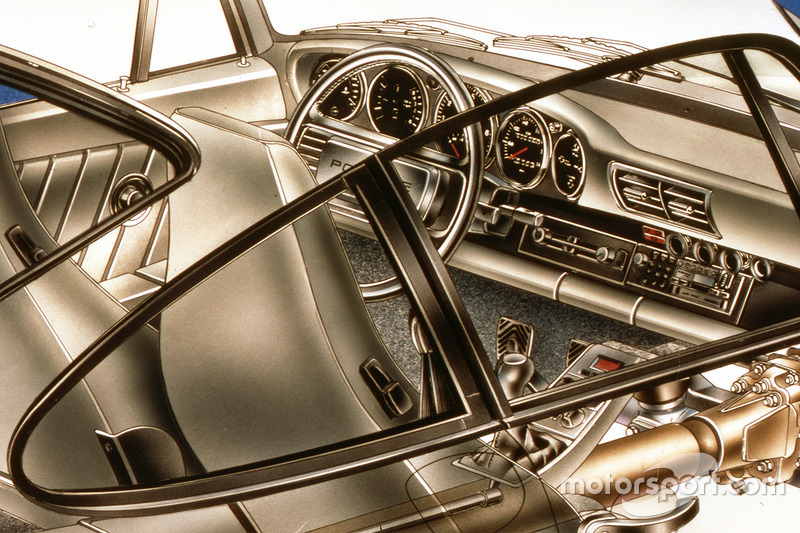 A supercar that stood out

Much of the leading-edge technology found on supercars filters down into everyday street cars, but with the 959, there was nothing that could challenge its all-weather capabilities.

The Porsche 959 was a supercar that connected with the driver on all surfaces, conditions, and challenges the road may have, while other exotics struggled to pass the next service center.

The technology on board this Porsche supercar dictated how the company would progress in the future and asserted itself as a practical everyday car. A practical everyday supercar that could tear through 0-60 mph in only 3.2-seconds on its way to a top speed of 197 mph (317km/h).

The 959 broke records and redefined what a supercar could be. It most certainly elevated Porsche into the territory of performance and price reserved exclusively for the Italians. The technology developed for the 959 propelled Porsche as a contender and left many playing catch-up for years to come.

Indeed, the 959 is the grandfather of the way manufacturers design a modern supercar. 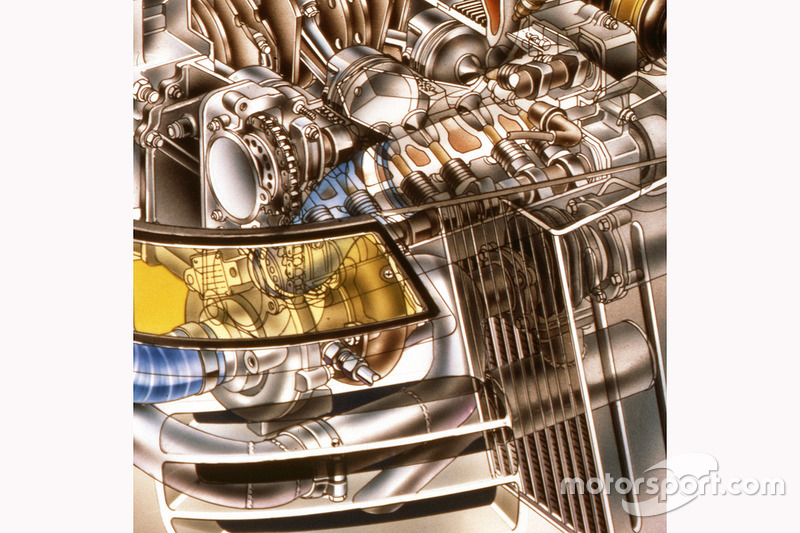 Flat-six engine at its heart

At the core of the Porsche 959 performance prowess was a powerplant that was familiar but would be tweaked to meet the unique needs of racing. Under the rear decklid was a de-stroked flat-6 boxer motor displacing 2.85 liters with an air-cooled block mated to liquid-cooled heads.

The engine started its roots for the Porsche 935 ‘Moby Dick’ race car and was breathed-on ever so slightly for Porsche’s quickly-defunct IndyCar effort. In its final iteration, the motor appeared in the Porsche 959 race car and the largely unchanged street version.

One of the problems that plagued early turbocharged Porsches was a huge rush of power under boost. With a nickname like the ‘widowmaker’ given to the 930 Turbo, it was no mystery that Porsche was in pursuit of smoother power delivery versus the on/off insanity days of yore.

The solution? Sequential turbochargers hanging off each bank of cylinders. The net result was the smaller turbo would spin up faster providing instant boost and a seamless transition of power while the larger turbo kicked in and provided full boost. The power produced was 450 horsepower out of this compact yet advanced unit but one that was a first in the automotive industry to provide sequential turbo boost.

The sequential turbo design would live on to see life in other cars like the third generation Mazda RX-7 and the Mark IV Toyota Supra. While sequential turbocharging efficiency might have peaked long ago, the idea has spawned today’s engine designs with turbo/supercharger systems providing that instant-on low down boost. 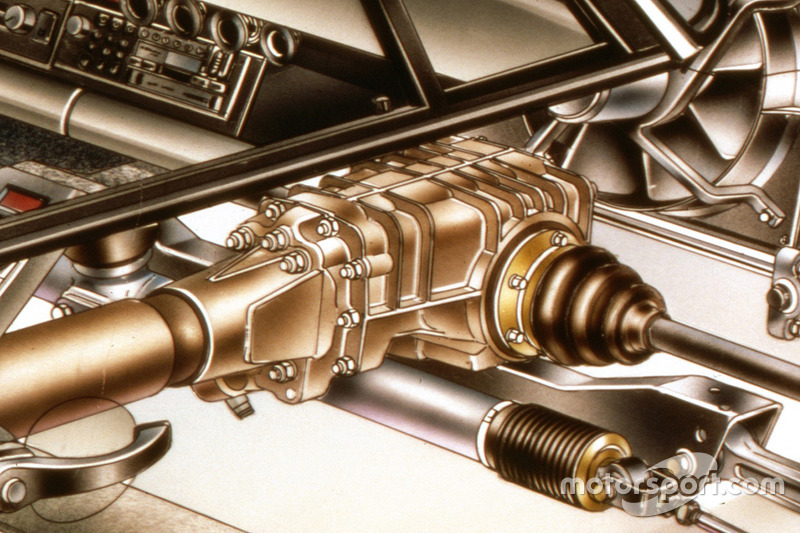 Porsche was not a pioneer in adapting all-wheel-drive systems to passenger vehicles. However, while others were struggling with ride height and clunky technology, Porsche was in the pursuit of perfecting AWD for performance handling.

The Porsche-Steuer Kupplung (PSK) system was truly groundbreaking as it was able to dynamically distribute the torque to the front and rear of the car depending on conditions. The PSK was essentially full-time AWD, but the torque could be distributed by a wet multi-plate clutch located up by the front differential.

During regular tarmac performance, up to 80 percent of the power was transmitted to the rear wheels where weight and grip was optimal. As the vehicle broke traction or the weight shifted, the vehicle would channel power to the front wheels for a maximum 50:50 power distribution. There were four different user-controlled modes via a simple onboard dial. The modes were: normal dry roads, wet surfaces, snow, and ice, as well as a full-time setting that featured 50:50 torque split all the time.

The 959 prominently featured a gauge on the dash to indicate the amount of torque being pushed around fore and aft the vehicle. As legend would have it, the Nissan Skyline GT-R R32 all-wheel-drive system called ATTESA-ETS was inspired by the 959, complete with torque-split gauges and all.

The 959 pushed Porsche to integrate AWD on all Turbo models from the 993 onward to ensure optimal possible traction for their most powerful cars. Many manufacturers soon followed suit migrating their rear-wheel-drive platforms to the surefooted grip of AWD as more horsepower could be harnessed this way. 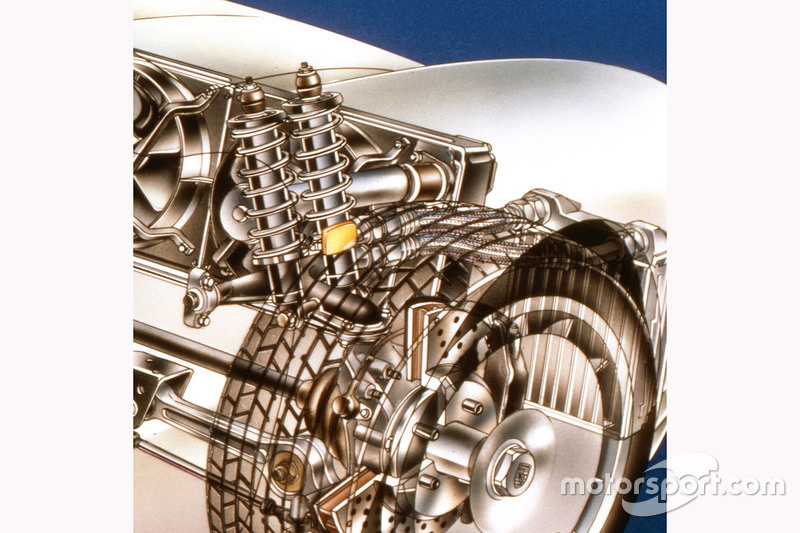 The Porsche 959 was unique in that it retained the four-wheel independent suspension, dual-damper design that the race version featured. Yup, that’s right: two dampers per corner like one might find in an off-road vehicle, however this suspension was designed with versatility in mind.

German suspension maker Bilstein provided the innovative dampers on the 959 that allowed for both height and dampening adjustability. At each corner, one damper has electric motors onboard to change the stiffness of the suspension settings by controlling the damping valve.

The other damper on each corner featured a hydraulic oil system that filled the damper to raise and lower the ride height of the vehicle. The height adjustability could be manually set in cockpit to one of three different levels or set to automatic, which lowered the 959 by 1.2-inches at speeds over 95 mph or raised by 1.2-inches for low speed navigation and harsh conditions.

Height adjustability like this might be more commonplace today with manufacturers like Mercedes-Benz, Land Rover and Lamborghini, but 30 years ago this was most certainly progress. Over the proceeding decades many manufacturers had variations of in-cabin suspension adjustability with varying degrees of success (and failure). 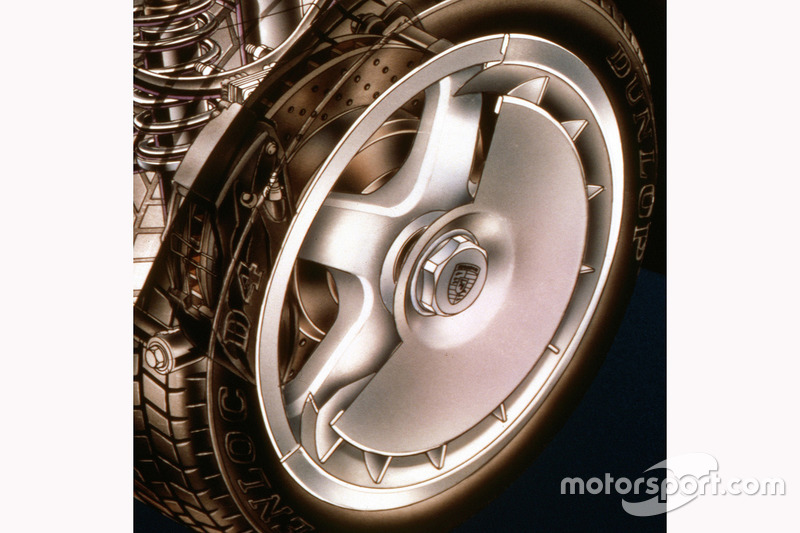 If you are fan of Alpina-modified BMWs, then you probably know about their trademark hollow-spoke turbine wheel design. The hollow spokes allow for a central tire inflation nozzle hidden behind the center cap as opposed to protruding out and failing at over 186 mph (300 km/h). Tire pressure monitoring systems are mandatory on all new cars today and the jury is still out on whether they are more of a headache than a savior.

Regardless, the Porsche 959 did one better, and once again decades before it became commonplace. The 959 featured magnesium alloy wheels that were lightweight and allowed engineers to make them hollow. The wheel was fitted with a central tire pressure monitoring system and a tire inflation/deflation system to optimize traction on different surfaces.

The 959 wheel sub-system itself gave way too much of the technology we see today on both supercars and regular everyday vehicles. 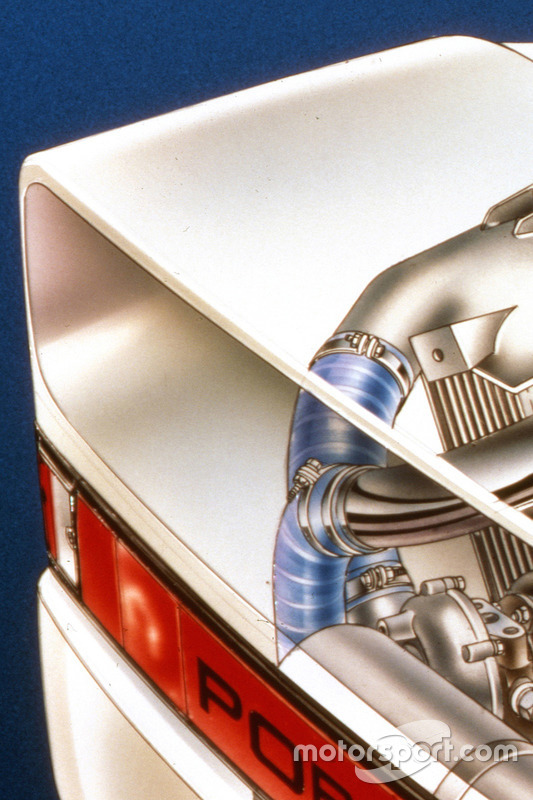 Today many cars feature aluminum structures, composite body panels, and even lightweight mechanical components. However, back in the day the 959 had extensive use of aluminum, Kevlar and even Nomex.

The entire skin of the vehicle was a blend of (then) exotic panels. For instance, the nose and bumper were made of aerodynamically and carefully sculpted polyurethane. Much of the exterior skin was replaced with light, yet strong Kevlar versus the steel used on the 911, while the doors, lid, and rockers were made of aluminum.

When the 959 finally hit the scales, this supercar weighed in at only 3,185 pounds. While this is light by today’s standards, it was marginally heavier than the average minimalist design sports car of the day, yet none of them boasted computer-controlled all-wheel drive, a sequential turbo system, or a two-damper-per-corner suspension with all of the associated wiring, sensors, and seven onboard computers.

The overall drag of the car dropped from the 0.38 of a 911 down to 0.31 for the 959 design, which featured zero-lift aerodynamics affecting the front end.

It truly was a machine that was way ahead of its time. 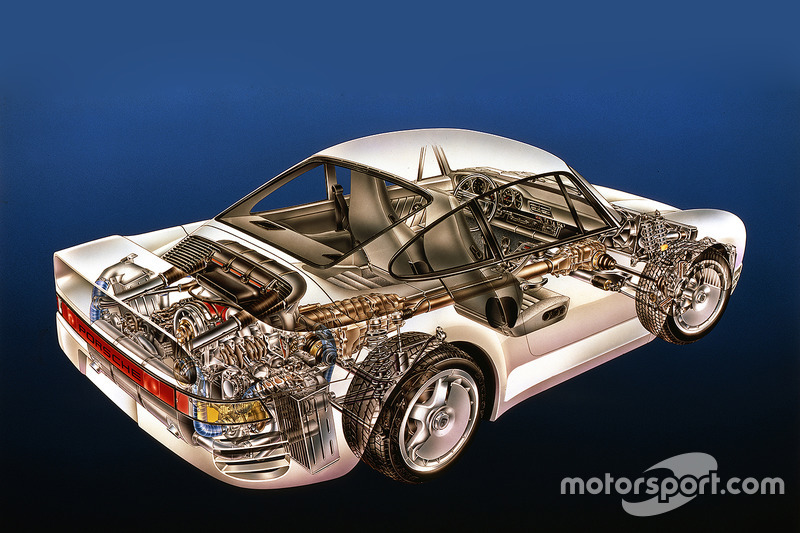 Technical illustrator David Kimble has been drawing cutaways of some of the most important cars and race cars in existence for over 50 years. A graduate of the Pasadena Academy or Technical Arts, Kimble has painstakingly produced dozens of accurate cutaways based on actual engineering drawings, CAD files and hands-on inspection documented with photographs. His career pursuit began in 1964 and he has continued to push the boundaries of hand-drawn illustrations appearing many publications including MotorTrend and Car & Driver. Kimble resides in Marfa, TX and operates a studio where these drawings, which often take months to produce are carefully crafted without the use of computer technology.