The question to what will happen to the entry-level racing series in the Championship Auto Racing Teams, Inc. was answered today, ending the dreams of many young drivers. Burt Frisselle. Photo by Eric Gilbert. Skip Barber Racing School, ...

The question to what will happen to the entry-level racing series in the Championship Auto Racing Teams, Inc. was answered today, ending the dreams of many young drivers. 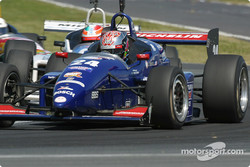 Burt Frisselle.
Photo by Eric Gilbert.
Skip Barber Racing School, LLC announced that the Barber Dodge Pro Series will not compete in 2004. The decision was made after Judge Frank J. Otte made the final ruling in Bankruptcy Court as to the fate of the financial-defunct CART series. On January 28, Judge Otte awarded the CART assets to Open Wheel Racing Series, LLC.

The announcements today was made due to the uncertainty surrounding open wheel racing in North America. Skip Barber Racing School President and CEO Aaron Hollander stated, "The delay settling the ownership status of Champ Car prevented us from adequately preparing for the 2004 season."

Hollander's statement was a surprise since as recently as January 13th, the SBRS signed Scot Elkins to oversee data acquisition on the fleet of Reynard-Dodges and will provide data analysis for all series drivers and driver coaches for the 2004 season.

Even with the knowledge of CART's financial headache and that OWRS had made a bid to buy the series, SBRS announced their 2004 schedule. The season opener for the Barber Dodge Pro Series was to have been a return to Sebring as a support race for the American Le Mans Series 12-hour race.

It now appears the Barber folks were optimistic about the 2004 season and the fallout is that they now feel it is prudent to take the year off.

"We were unable to negotiate a mutually beneficial sanctioning relationship that would allow us to operate a viable series for our drivers and sponsors," expressed Hollander. "Having said that, we look forward to the possibility of continuing to work with and support Champ Car in numerous ways this year and in the future. We wish them nothing but success." 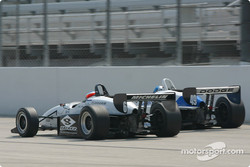 Leonardo Maia and Luis Pelayo.
Photo by Eric Gilbert.
The series that has been a feeder into the former Indy Lights Championship, the Toyota Atlantic Championship and CART, as well as the drivers who moved up to the Indy Racing League IndyCar and the Infinite Pro Series, has not given up. They have plans.

Their first objective is to elevate and expand the Formula Dodge National Championship Series for aspiring professional drivers with more visibility. And they are already focusing on the 2005 Barber Dodge Pro Series.

Hollander commented, "We are exploring all alternatives for 2005 that meet the requirements of a changing marketplace. Skip Barber Racing participates in nearly every facet of motorsports and we are afforded a large number of opportunities for continued growth. We are very optimistic about the future of racing in North America."